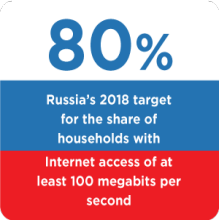 In 2012, the Russian Federation announced one of the world’s more ambitious broadband Internet development goals: providing 80% of Russian households with “ultrafast” connection speeds—at least 100 megabits per second (Mbps) by 2018.[1] That goal exceeds the current targets in Germany and the European Union, and it is about equivalent to those currently being pursued by countries with ambitious strategic broadband connectivity goals, including Denmark, Sweden, and the United States. As part of the effort to reach its 2018 target, the Russian government recently tasked Rostelecom—a largely state-owned enterprise and the dominant firm in Russia’s broadband market—with the responsibility of connecting 4 million people (about 2.8% of all households) in small, widely scattered settlements throughout Russia by installing 200,000 kilometers of fiber-optic cable providing speeds of at least 10 Mbps. The assignment is both a great opportunity and a huge challenge for Rostelecom and for the entire Russian broadband sector. What can Russia do to ensure Rostelecom’s successful completion of its specific task as well as the success of the broader 2018 target?

Russia has already achieved some notable successes in providing both fixed and mobile broadband connectivity:

Currently, 57% of Russian households have access to fixed broadband (compared with a 79% penetration for the European Union), but Russia’s progress toward its 2018 goal by bringing “fiber to the home” (FTTH) is encouraging. In the second half of 2012, Russia gained more FTTH subscribers (2.2 million) than all 27 EU countries combined. Russia has been projected to achieve “fiber maturity” (FTTH for at least 20% of households) by 2018, ahead of France, Italy, and the United States, for instance.

These achievements aside, Russia faces a number of challenges in the broadband sector, particularly in reaching both rural and remote areas. Only one-third of households in rural areas have broadband access to the Internet, compared with nearly two-thirds in urban areas. Fixed broadband penetration is highest in Moscow (31%) and the lowest in the Chechen Republic (0.1%). Russia’s immense size, difficult terrain, sparsely populated areas, and low level of socioeconomic development in certain regions contribute to this vast digital divide.

Russia’s broadband market is dominated by the 48% state-owned Rostelecom. It controls nearly all key elements of broadband architecture, from backbone access to international connectivity. It holds almost 45% of the retail fixed broadband market—a share nearly four times greater than that of its closest competitor. Moreover, through acquisitions, Rostelecom has been increasing its market share in virtually all telecom market segments, including both fixed and mobile telephony and mobile broadband.

Rostelecom’s strong position in the market, combined with the government’s control of both policy and regulations, tends to discourage needed private investment. It thus creates a legitimate concern about the state’s ability to manage its aggressive 2018 plan without a dysfunctional conflict of interest. More specifically, by inhibiting private investment, the absence of an independent telecom regulator may prove to be an obstacle to achieving greater competition in the broadband market. In the long run, the market could shrivel, stalling much of Russia’s recent progress in the sector.

The hobbling of competition thus also represents a potential barrier for Rostelecom and its immediate task of connecting 4 million people in 13,600 small settlements. The project will ultimately cover a territory of more than 33 million people when larger communities connected en route are counted. To reach this formidable target for universal communication service by 2018, Rostelecom will likely need to involve local, private commercial operators in delivering service to end users to ensure a widespread commercial presence at the local level. Bringing in a diversity of providers will require an efficient, open-access model for the sector that allows the maximum use of both existing and new infrastructure (see, for example, Connections Note #7, “Key Pathways to High-Speed Internet in the Middle East and North Africa”).

Rostelecom’s market share and the state’s role as both policymaker and regulator creates concerns about the health and competitiveness of the country’s broadband market. The worry is that these issues of governance and competitive vitality threaten the tremendous progress Russia has made over the past few years and its near-term potential to attain broadband coverage comparable or superior to that of the current global leaders. Ultimately, the long-term sustainability of Russia’s effort will depend on certain strategic and regulatory reforms and initiatives:

[1] The goal translates to 40 million households—at least a six-fold increase in the share of households with such speeds given that, as of mid-2015, only about 13% of broadband connections exceeded 15 Mbps (Akamai, State of the Internet Report, https://content.akamai.com/PG3046-Q2-2015-SOTI-Report.html). Broadband Internet is the successor to telephone dial-up technology (56 kilobits per second). Broadband Internet is an “always on” service delivering a download rate of at least 256 kbps through conventional telephone, coaxial cable, fiber-optic cable, and wireless modes. The newest of these modes have dramatically raised broadband speeds. For example, the U.S. Federal Communications Commission in early 2015 raised its definition of minimum broadband data speeds from 4 Mbps to 25 Mbps for download and from 1 Mbps to 3 Mbps for upload.