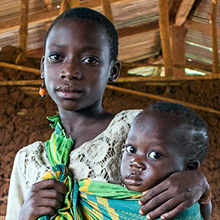 The World Bank Group is committed to fighting poverty in all its dimensions. We use the latest evidence and analysis to help governments develop sound policies that can help the poorest in every country, and focus our investments in areas that are critical to improving lives.

For almost 25 years, extreme poverty was steadily declining. Now, for the first time in a generation, the quest to end poverty has suffered its worst setback. Global extreme poverty is expected to rise in 2020 for the first time in over 20 years as the disruption of the COVID-19 pandemic compounds the forces of conflict and climate change, which were already slowing poverty reduction progress. 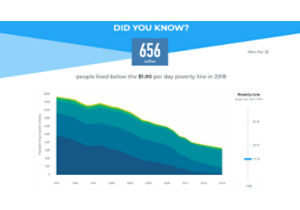 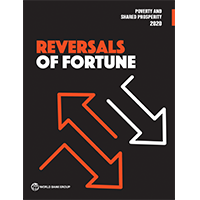 For more than two decades, extreme poverty was steadily declining. Now, for the first time in a generation, the quest to end poverty has suffered its worst setback.

The pandemic has caused unprecedented reversals in poverty reduction that are exacerbated by rising inflation and the effects of the war in Ukraine. We estimate that these combined crises will lead to an additional 75 million to 95 million people living in extreme poverty in 2022, compared to pre-pandemic projections. Read more.

Of the world’s 736 million extreme poor in 2015, 368 million—half of the total—lived in just 5 countries. The 5 countries with the highest number of extreme poor are (in descending order): India, Nigeria, Democratic Republic of Congo, Ethiopia, and Bangladesh.

To make significant continued progress towards the global target of reducing extreme poverty (those living on less than $1.90 a day) to less than 3 percent by 2030, large reductions in poverty in these five countries will be crucial. Read More.

More than half of the world’s extreme poor live in Sub-Saharan Africa. Yet, several African countries have recently made impressive gains in reducing poverty. Read More.

Today, less than 10 percent of the world population lives in extreme poverty. Based on information about basic needs collected from 15 low-income countries, the World Bank defines the extreme poor as those living on less than $1.90 a day. However, because more people in poverty live in middle-income, rather than low-income, countries today, higher poverty lines have been introduced. These lines are $3.20 and $5.50 a day, which are more typical of poverty thresholds for middle-income countries. Read More.

Globally, extreme poverty has rapidly declined. New poverty estimates by the World Bank suggest that the number of extremely poor people — those who live on $1.90 a day or less — has fallen from 1.9 billion in 1990 to about 736 million in 2015. Read More.

Recognizing the incompleteness of the so called monetary measure of well-being, this year’s Poverty and Shared Prosperity Report proposes a multidimensional poverty measure. It adds deprivations in education (child school enrollment and adult school attainment) and access to basic infrastructure (drinking water, sanitation and electricity) to the consumption measure to construct a more complete picture of poverty. With this broader definition of poverty, many more people come into view as poor. Read More.

Globally, poverty by employment status is highest among unpaid workers (22 percent), followed by self-employment, and those out of the labor force (both 12 percent). Read More.