The World Bank in South Sudan

In South Sudan, the World Bank is supporting the Government’s efforts to strengthen its institutions, support basic public service delivery, and promote resilience and livelihood opportunities across the country.

The Republic of South Sudan became the world’s newest nation and Africa’s 55th country on July 9, 2011. Renewed conflicts in December 2013 and July 2016 have undermined the development gains achieved since independence and worsened the humanitarian situation. As a consequence, South Sudan remains severely impacted fragility, economic stagnation, and instability a decade after independence. Poverty is ubiquitous and is being reinforced by ongoing intercommunal conflict, displacement, and external shocks. 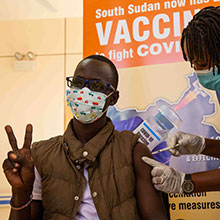 While continuing support for prevention, detection and response to COVID-19, this project will increase access to essential health and nutrition services for select refugee and host communities.

Work With Us In South Sudan