Country-by-country analysis and projections for the developing world 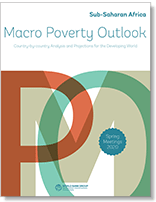 The Macro Poverty Outlook (MPO) analyzes macroeconomic and poverty developments in 48 developing countries in Sub-Saharan Africa. The report is released twice annually for the Spring and Annual Meetings of the World Bank Group and the International Monetary Fund. The MPO consists of individual country notes that provide an overview of recent developments, forecasts of major macroeconomic variables and poverty during 2022-2024, and a discussion of critical challenges for economic growth, macroeconomic stability, and poverty reduction moving forward.

Notes: For more on the greenhouse gas projections in this edition of the MPO see pdf GHG emissions in MFMOD.
On new global poverty lines: Poverty data are now expressed in 2017 Purchasing Power Parity (PPP) prices, versus 2011 PPP in previous editions. As price levels across the world evolve, global poverty lines have to be periodically updated to reflect the increase of the value of the lines in nominal terms. The new global poverty lines of $2.15, $3.65, and $6.85 reflect the typical national poverty lines of low-income, lower-middle-income, and upper-middleincome countries in 2017 prices. In addition to reflecting updates in nominal terms, upper-middle-income countries raised the standards by which they determine people to be poor from 2011 to 2017. Hence, the increase in the upper line is larger, and the population that does not meet the new standard is higher in most countries than it was with 2011 PPPs. See pip.worldbank.org.

The interactive dashboard allows data from the revised MPO forecasts to be visualized, compared across countries, and downloaded.