From Sidewalk to Subway

From Sidewalk to Subway - Achieving Sustainable Financing for Urban Transport 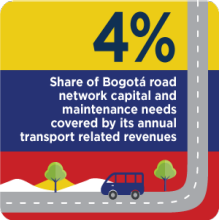 The state of urban travel in many developing countries is grim. Congestion and low-quality infrastructure—including limited network coverage and poor roads and sidewalks—slow travel times, which slows economic development. Lower-income residents rely the most on public transport and bear a disproportionate share of the burden of its failures. The low quality of urban public transport systems in developing countries indicates a chronic financing gap—underfinancing for capital investments, operations, and maintenance. Though urbanization is an important ingredient in poverty reduction, it inevitably strains urban transport, so it is widening the financing gap. World Bank research released this year has pinpointed sources of the financing problem and proposed a response based on the concept of “who beneﬁts, pays.” By tapping into innovative revenue sources that promote eﬃcient pricing, increase overall revenue, and strengthen all elements of sustainable transport, urban areas in developing countries can fund a wide variety of urban transport projects in a manner that will ensure their sustainability.

Overburdened and deteriorating public transport typically reflects an “underfunding trap”: new transport infrastructure cannot get financing, while the revenue generated by existing small-scale and often poor-quality systems cannot cover maintenance and operations. Even larger transit networks with better infrastructure struggle under heavy costs for operation and maintenance. The result of the underfunding trap is a funding gap.

Although private cars represent only a minority of urban trips in developing countries, they cause congestion, sprawl, accidents, and pollution that impose huge and disproportionate costs that their operators do not cover.

Hence, cars generate more costs than benefits—the reverse of public transport—yet they have a political advantage because their costs are less visible. Explicit public expenditures for public transport are often the subject of political controversy, while the public subsidies for cars are implicit, and so are often overlooked.

The complex causes of the funding gap can be summarized as follows:

The World Bank’s research offers a strategy that can allow cities to break out of the underfunding trap and close the transport funding gap. The key is using a comprehensive rather than piecemeal approach.

The underlying concept of the strategy is that if you benefit, you pay. When assessing available financing mechanisms, that concept directs attention to beneficiaries, both direct (travelers) and indirect (such as employers and developers).

In addition, it specifies the concept of financial sustainability of a financing instrument, which can be weighed in terms of its stability in relation to economic cycles, political acceptance, and administrative ease. And it specifies transport sustainability, which is measured in terms of the instrument’s impact on demand, fairness in pricing, social equity, and environmental impact.

The framework built on these premises can generate wise investments that add benefits while reducing expenditures.

The findings suggest that instruments that charge direct beneficiaries of urban transport investments, such as drivers and passengers, may be politically difficult to enact but efficient in achieving sustainable transport goals. These instruments generate a continuous revenue flow that can be used for all three types of expenses—capital, operations, and maintenance.

Charging indirect beneficiaries, such as developers and landowners, is less efficient in terms of transport sustainability but affords a generally stable and convenient way to raise a large sum for capital investments.

Finally, documenting the major economic, social, and environmental benefits of sustainable transport projects provides the foundation for funding from national or international institutions. However, only public transport generates benefits sufficient to justify public funds to pay for investments, operations and maintenance. Besides controlling farebox charges, public funding of public transport must ensure that all residents have affordable access to high-quality integrated public transport systems.

The principle that the beneficiary pays suggests a mix of complementary instruments, multiple levels of government, and different sectors. For capital investments, a combination of grants from several levels of government, loans from funding agencies, and investments through public–private partnerships could be used to finance large projects that benefit the general public.

Property taxes emerge from the study as a cost-effective way to pay for capital, operations, and maintenance of the transport system including neighborhood roads, sidewalks, bike-paths, and other improvements that benefit the general population.

In short, by combining appropriate financing instruments and focusing on the “Who benefits, pays” principle, overburdened urban transport systems can be revived with wise and sustainable investments to cover capital, operation and maintenance of all parts of a transport system—“from the sidewalk to the subway.”