Transport at COP21: Part of the Climate Change Solution

This is note #28 in the Connections series. You can download the PDF version of this note through this link.

Joining Forces to Ramp Up Mitigation and Adaptation 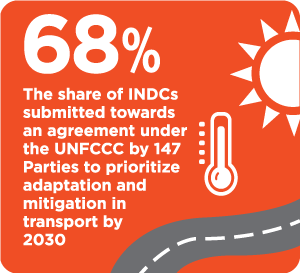 The case for climate action has never been stronger.  Around the world, climate change is putting at risk the lives of millions of people as well as threatening many coastal cities and endangering trillion of dollars of investments in transport infrastructure and services. The Twenty-First Conference of the Parties (COP21) to the United Nations Framework Convention on Climate Change (UNFCCC) will bring heads of state and ministers to Paris at the end of November to reach a global climate agreement with far-reaching implications for low-carbon and climate-resilient growth. Transport is playing a greater role in COP21 than in past UNFCCC conferences as a critical part of the solution: a sector that can contribute to both reducing greenhouse gas (GHG) emissions and building economy wide resilience to the impacts of climate change. In view of the sector’s potential, the heavily debated transport question is how to sustainably meet the rising global demand for greater interconnectedness and mobility. The World Bank and the seven other leading multilateral development banks have joined forces with the Paris Process for Mobility and Climate (PPMC) and the rest of the transport community to call for more action on transport and climate change.

An Opportunity for Transport

Actions to reduce GHG emissions and stabilize warming at 2 degree Celsius, as agreed internationally in 2009, will fall short if they do not include the transport sector. Discussions have largely focused on the reduction of emissions and mitigating the effects of climate change, but transport resilience is critical to the quick recovery of other sectors after natural disasters and climate-related events. Hence, social and economic resiliency depends on adapting transport systems to better withstand climate impacts.

In the face of these challenges, client countries are demanding more climate action. The 147 Parties to the UNFCCC have submitted Intended Nationally-Determined Contributions (INDCs)[1] ahead of COP21; of those, more than 100 prioritized transport sector for mitigation, and fewer for adaptation.[2]

Multilateral development banks (MDBs) have been delivering finance for climate action. From 2011 to 2014, they committed more than $100 billion to climate mitigation and adaptation, including about $20 billion in the transport sector.

The MDBs took a concerted move for transport at the 2012 UN Conference on Sustainable Development (Rio+20), where they pledged $175 billion in loans and grants for more sustainable transport over the 2012–22 decade (see Connections Note 18). The resulting increase in MDB support for sustainable transport since then—they are currently lending an average of $25 billion per year—is putting them on track to meet their Rio+20 commitment.

In October 2015, the MDBs agreed to significantly ramp up overall climate finance by 2020, and transport is expected to play a key role. The World Bank Group pledged to increase its climate finance by one-third, to 28 percent of its annual commitments, by 2020. Currently, transport is second only to the energy sector in its contributions to mitigation and adaptation co-benefits in World Bank projects.

With transport contributing to 23 percent of global CO2 emissions, the sector holds the key to reducing the emissions trajectory. Investments in low-carbon solutions are urgently needed to increase the sustainability of existing and new transport systems. The most significant opportunities to shift policies and investments are in the design of public transport systems, vehicle efficiency, demand management, regional development, and land use.

At COP21, the MDBs and other international financial institutions will announce “common principles” to ensure transparency and credible, robust reporting of GHG emissions in transport projects.

Call for More Action on Adaptation

Developing countries are investing massively in transport infrastructure, and spending is likely to rise even further to meet aspirations for greater mobility and connectivity. But worsening climate impacts have the potential to affect the entire transport value chain, from its location, design, and construction standards to the services it provides. Hence, new and existing transport systems urgently need greater investment in resilience.

And the demand for climate action is there—from the 100 Parties to the UNFCCC that have adaptation among their priorities, to the 20 most vulnerable countries that have come together to implement greater climate resilience.

Tellingly, however, very few of the plans submitted to COP21 include transport-specific adaptation measures. Thus, enormous effort is still required to build the climate resilience of transport in client countries and hence build the climate resilience of the countries themselves. Doing so depends in part on developing the right approaches, including upstream sectoral and spatial planning and post disaster risk and recovery support. The effort must also strengthen and refine the enabling environment, which includes awareness, the capacity to address climate impacts, and the tools and methodologies to integrate these concerns in decision making. The World Bank is ready to play its part in all these ways.

For further information on this topic:

[1] INDCs introduce a bottom-up process to define country-level mitigation and adaptation efforts that are guided by national development priorities, equity, and common responsibility.