Lima Urban Transport: On the Way to Transformation

This is note #22 in the Connections series. You can download the PDF version of this note through this link. 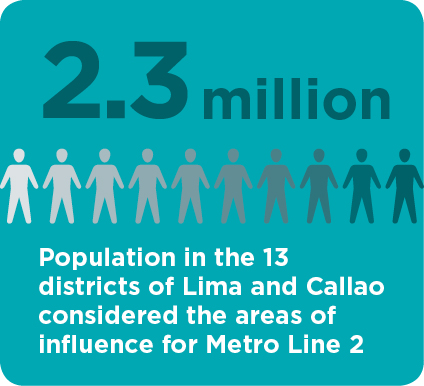 The implementation of Metro Line 2, now under way, will provide a modern, 35 kilometer mass transit axis linking major population and job centers in Lima—the capital of Peru—with Callao to the west, the country’s chief seaport and international airport. Integrated with the Lima-Callao region’s existing public transport network, Line 2 will create a major corridor that will improve the accessibility of jobs, services, and markets for 2.3 million people and provide a backbone for more efficient urban development. Beyond the investment loan, this cofinanced project is an outgrowth of a long-term metropolitan transport strategy and multifaceted engagement that is aligned with the World Bank’s goals of reducing poverty and boosting shared prosperity through sustainable development. It will give a boost to the competitiveness of the entire Lima-Callao Metropolitan Region, which has a population of more than 9 million and constitutes more than one-third of the national economy.

Challenges and Progress to Date

As the urbanization of Peru continues, the country faces severe constraints in making its growth sustainable. A key problem is the past underinvestment in transport infrastructure, which limits access to jobs and services in many urban areas, especially for the poor who tend to live in peripheral areas.

The Lima-Callao Metropolitan Region (LMR) grew rapidly in the past decade and is now one of the most congested and polluted in Latin America. The launch of service on the Metropolitano bus rapid transit system in 2010 (supported by a World Bank investment loan) and on Metro Line 1 (elevated rail) in 2011 were tremendous steps forward for the LMR. The two lines together now carry about 1 million passengers per day, but there is still much to do, as this nascent mass transit system carries less than 10% of the public transport trips in the LMR.

The vast majority of motorized trips are still made with largely unregulated, low-capacity vehicles that compete for customers on the street. Essential to realizing the economic potential of the LMR in a sustainable and inclusive way is expanding the mass transit system and strengthening transport policies with complementary investments.

Metro Line 2 is the first priority in a 168 km mass transit Master Plan for LMR approved by the government of Peru in 2010. Once completed and integrated with the public transport network, Line 2 is expected to carry 660,000 passengers per day and influence the region’s long-term development in many ways.

• Expanding the mass transit network improves opportunities for all by reducing the travel time and expense required to access jobs, markets, and services such as health and education.

• Universal design features will accommodate peoples with disabilities and other disadvantaged groups.

• The integrated transit corridor constitutes the backbone of an inclusive urban development process that will promote more efficient land use and boost competitiveness.

About four-fifths of public transport users in the LMR are in the bottom 40% of the region’s income distribution.

• On average they spend more than 20% of their income on transportation (while the overall average for the region is about 13%).

• They make 30% fewer trips overall than do the rest of the population because of long travel times or high costs.

More than 60% of the estimated ridership for Metro Line 2 will come from other modes of transportation, making modal integration a key objective. By linking Line 1 with the Metropolitano BRT and the future Line 4 and urban feeder services, the Line 2 Project could increase the number of jobs available within a 60-minute commute by as much as 25%.

The Metro Line 2 Project is pioneering on many fronts. It will be implemented in stages under a public-private partnership (PPP) arrangement that remunerates the concessionaire for milestones completed. The 35-year concession contract, signed in April 2014, covers every phase of the project, from design through financing, construction, operation, and maintenance. Thus, it is one of the world’s few “fully bundled” PPPs in the urban transport sector.

Line 2 will also include state-of-the-art construction technologies and a “driverless” automated system to operate the trains that is expected to reduce operational costs.

At a cost of more than $5.3 billion, with about 20% of the financing coming from the private concessionaire, Metro Line 2 is one of the largest and most ambitious investment projects in the history of the country. A $300 million loan from the International Bank for Reconstruction and Development to the government of Peru will support the public contribution to the concession. The government has also secured financing from the Inter-American Development Bank and the Development Bank of Latin America (CAF) and may be negotiating with three other international financing institutions.

A single “megaproject” such as Line 2, however large, does not by itself guarantee the needed transformation. Also required will be integration with land development, surface transport reform policies, complementary investments, and partnerships with local governments.

The World Bank is working with governments at the national and local level and with partner financing institutions to leverage a plan for coordinated technical assistance and institutional strengthening in several key areas:

For more information on this topic: https://documents.worldbank.org/curated/en/2015/09/24952460/peru-lima-metro-line-two-project

Connections is a weekly series of knowledge notes from the World Bank Group’s Transport & Information and Communication Technology (ICT) Global Practice. Covering projects, experiences, and front-line developments, the series is produced by Nancy Vandycke and Shokraneh Minovi. The notes are available at https://www.worldbank.org/en/topic/transport/brief/connections.