The transformative role transport can play in mitigation and adaptation

by Stephane Hallegatte and Mook Bangalore 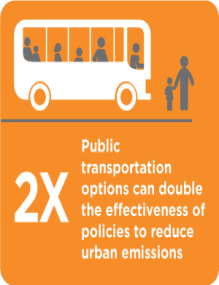 The choices developing countries make today in building and expanding transport networks will irreversibly shape development for the next century. That is why urgent steps are needed to ensure that transport development avoids locking in carbon-intensive or high-risk patterns. While investments in urban planning and public transportation pay off over the long term, they also entail high up-front costs, making it essential to scale up support from the World Bank Group and other international institutions. The commitment to achieving zero net emissions by 2100 made at the Paris climate negotiations cannot be achieved without radical changes in how cities grow—and transport planning must be part of green growth strategies. Furthermore, climate-related issues such as food security, extreme weather events, and the health impacts of urban pollution have ties to the quality, affordability, and availability of affordable transport in both rural and urban areas. With many cities in developing countries only now planning transport infrastructure, this is the ideal time to ensure that transport planning incorporates climate-smart and low-carbon priorities.

This Connections note highlights the importance of the transport sector for climate change, with findings and data drawn from the recently released report Shock Waves: Managing the Impacts of Climate Change on Poverty. The report stresses the transformative role transport can play in rural and urban areas in supporting effective climate change adaptation and mitigation strategies. Poor rural roads mean that when floods occur farmers cannot get their goods to urban markets, creating price spikes for the urban poor and slashing household incomes in rural areas. A lack of affordable public transportation options in developing country cities means that lower-income residents tend to cluster in neighborhoods more exposed to recurrent and extreme weather events.

As the Shock Waves report points out:

Policies are needed now to make development and climate change stabilization compatible: modern living standards will need to be supported in a more efficient and radically less carbon-intensive way … Priority should go to implementing the policies and measures that are urgently needed to prevent irreversibility and lock-ins into carbon-intensive patterns (such as those regarding deforestation, energy infrastructure, or urban transport).[1]

The issues raised by global climate change—threats to food security, increasing vulnerability to weather extremes, and health risks of urban pollution to name just a few—have linkages to the availability of reliable, affordable transport. Cities in many developing countries are only now planning to build or expand their transport infrastructure; now is the ideal time for support and interventions that promote climate-smart and low-carbon planning.

The corollary is also true: transport can play a role in buffering climate change impacts. For instance, in Burkina Faso, better access to markets has been found to reduce the volatility of maize prices.

Some four billion people live in urban areas today, more than quadruple the number in 1950.  In cities such as Mumbai, India, and Ho Chi Minh City, Vietnam, poor residents tend to settle in neighborhoods that are less expensive but also more exposed to hazards like floods and storms. A World Bank survey of poor households in flood-prone areas of Mumbai found that more than 75 percent reported lost work time due to flooding of unpaved roads in the rainy season. Respondents in Ho Chi Minh City reported that flooded roads made low-income factory workers late, resulting in lost wages and fines. Asked what it would take for residents to relocate to safe areas in Mumbai, more than half responded that they would relocate to a safer area if they had access to inexpensive transport, health services, schools, and social networks.

The take-away is that land use planning to restrict development in risky areas and encourage it in safe areas can succeed only if the restrictions are accompanied by investments in transport and other infrastructure to make it possible for people access to the same or comparable jobs and services.

For the cities of the future, well-designed transit-oriented development interventions—taking into account natural risks—can ensure that growing cities generate economic gains and jobs without increasing exposure to natural risks. The World Bank Group is leading efforts to make hazard data more available to developers and urban planners through the online platform Geonodes.

Infrastructure decisions taken today are largely irreversible and will shape the city’s urban form for the next century and beyond. While transport infrastructure is undoubtedly expensive, sound planning up front is far less expensive than retrofitting a carbon-intensive city with cleaner transport options. Many growing cities in emerging economies have just such an opportunity today to prioritize transit-oriented development and plan efficient and robust systems from the ground up. This approach delivers many benefits: fewer cars with less congestion and accidents; higher economic efficiency and productivity; and lower vulnerability to disasters. A more energy-efficient city improves energy security by mitigating the effects of rising oil prices. Better still, climate-smart cities give people and firms alternatives to increasingly expensive carbon-based modes of transport, thus increasing the political feasibility of climate mitigation policies and the investment they require.

Countries are taking notice: 68 percent of countries include transport in their “Nationally-Determined Contribution” to climate change adaptation and mitigation they committed to in Paris. The far-reaching benefits of efficient transport—benefits that go beyond climate change and extend to public safety and sustainable economic growth—justify this commitment.