Synchronizing Installation with Other Public Works to Reach Underserved Areas 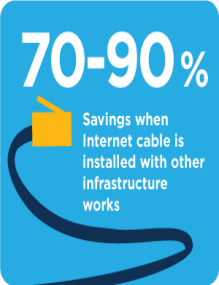 The high cost of extending Internet service beyond urban areas and the relatively low number of potential subscribers has combined to stall the expansion of this enabling technology in much of the developing world (and even in some advanced economies). Installing cables over land by exploiting existing infrastructure to carry the line eliminates most of the construction costs of domestic Internet networks—but that colocation option is much less available for remote or thinly populated areas. A way forward is to synchronize the installation with work on other suitable infrastructure projects (transport, energy, water, gas). The developmental value of high-speed Internet and the strategy of colocating cable with transport and power corridors are well understood (see Connections Note 7 and 2016-4). The missing piece is a legal and regulatory push to ensure that cable is accommodated when private or public infrastructure is built or renovated in rural areas. With technical assistance informed by precedents in advanced economies, the international community and developing countries themselves can do much to accelerate adoption of such policies.

Why Does Cross-Sector Coordination Matter?

Broadband (“always on”) Internet has become a powerful driver for sustainable economic growth, job creation, and education. That is why most developing and advanced economies have created national plans that target universal accessibility of broadband services. Moreover, the high data capacity of a fiber-optic main line (backbone), which delivers so-called ultrafast Internet service (100 megabits per second or more), makes it the most commercially viable technology. But the high costs of installing cable without “piggy-backing” on other infrastructure construction (in the advanced economies, as much as $100,000 per mile) limits profitable broadband investment primarily to densely populated areas.

Governments increasingly recognize the need for public intervention to reach low-density regions. One solution is to promote the extension of fiber-optic cable in coordination with new civil works, especially in the transport and telecom sectors. Coordination would make a significant difference in Morocco, for example. There, an estimated 40% of the population is excluded from high-speed Internet because telecom operators cannot profitably extend the service into thinly populated areas without a significant reduction in the cost of installation.

Coordinating the installation of new fiber-optic service with transport and other linear infrastructure projects has distinct advantages:

However, cross-sector coordination is rare when it depends on cooperative initiatives between private operators. Therefore, governments must provide an enabling legal and regulatory framework (including standards and procedures) to facilitate such synergies, especially for public infrastructure projects. Donors, including the World Bank, can provide technical assistance to help governments establish attractive legal and regulatory frameworks based on international best practices.

Contrasting laws and policies in the United States and France suggest the way forward in developing countries that wish to foster infrastructure coordination to extend fiber-optic connectivity at low cost. The U.S. system depends primarily on localities and voluntary action, which partly explains why colocation initiatives in the United States are not widespread. In contrast, France used its legal and regulatory system to establish nationwide information-sharing obligations while providing leeway for negotiating parties to reach agreement.

In 2012, the president issued an order to facilitate deployment of broadband infrastructure on land and buildings controlled by the federal government and on federally subsidized highways. A working group charged with reducing barriers to broadband services in underserved communities recommended identifying opportunities for colocation that would interest Internet service providers (ISPs). If ISPs did not act, it recommended using public funds to assist ISPs with investment or to finance duct installation as part of future leases to telecommunications operators. Most coordination has occurred at the local level because permit applications for infrastructure work are mainly the responsibility of municipalities.

In 2010, the government ordered coordination with local governments regarding infrastructure work located on public property and that communications providers (telecom operators and ISPs) be informed in advance of the work. These providers have six weeks to express interest. The order also specifies financial and technical criteria that facilitate cost-sharing. Providing such detailed legal and regulatory frameworks at the national level has significantly reduced costs of deploying broadband systems, especially for “public initiative” networks. In France, 90% of new communications networks include some cross-sector coordination.

In line with the approach taken in France and the Digital Plan for Europe,[1] the European Union in 2014 established binding provisions for the coordination of public infrastructure projects through national legislation in every EU member state.

In Mauritania, several public infrastructure projects are under way in areas not covered by fiber-optic networks; yet despite the negligible extra costs that would be involved, the projects do not include ducts required to later install fiber-optic cables. The World Bank is supporting a government effort there to reform infrastructure policy in a way that would bring such projects into alignment.

The approach proposed by the World Bank considered both the French and U.S. experience. It would establish an interministerial working group to define standards, procedures, and enforcement mechanisms for (1) facilitating fiber-optic deployment during the construction phase of public infrastructure projects (including the use of public funds to finance duct installation) and (2) promoting information sharing by infrastructure holders on existing infrastructure and ongoing or planned civil works (including development of a centralized database). The terms proposed by the working group could eventually lead to their enactment in the national public procurement code.

Although a growing number of emerging market economies are developing infrastructure-sharing regulations, they rarely specify standards and procedures for synchronizing fiber-optic deployment with other infrastructure projects.[2] Technical assistance to identify the most suitable legal and regulatory frameworks for a particular country would speed implementation of the necessary policies.

Government of France, executive order on reducing the digital divide, June 28, 2010 (in French),

EU Directive on measures to reduce the cost of deploying high-speed electronic communications networks, May 15, 2014,

[1] Launched in May 2010, the digital agenda for Europe is aimed at creating a single digital market within the EU.