Partnership for skills in Applied Sciences, Engineering and Technology (PASET) 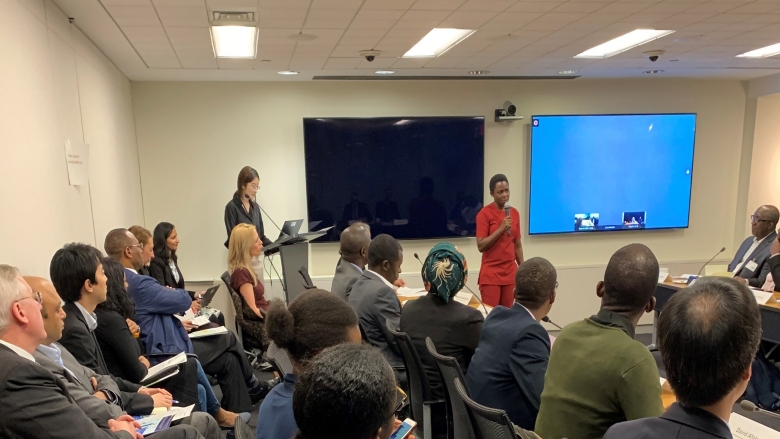 How a young Rwandan scientific trailblazer wants to transform gold mining extraction in Africa
March 26, 2020 — Pauline Munganyinka, a PhD scholar at the African University of Science and Technology (AUST) in Nigeria, and currently in a “sandwich” program (incorporating international and home university based study) with Worcester Polytechnic Institute (WPI) Read More » 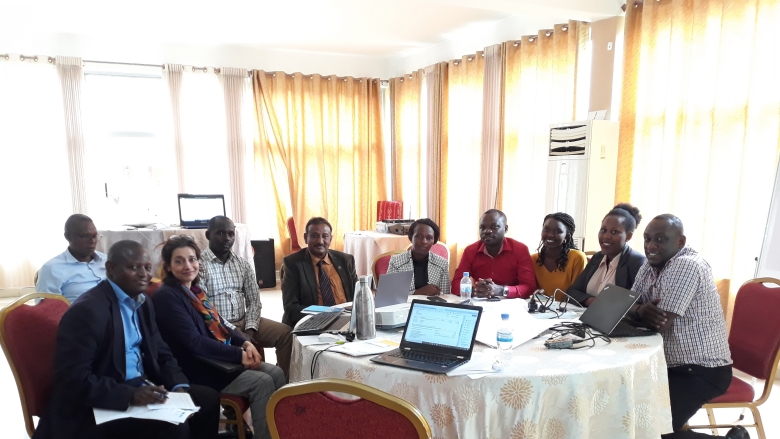 Digital Skills for all African Students: What Will it Take?
February 29, 2020 — Technology plays an integral role in every aspect of our lives, changing how we access education, how we work, and how we engage in everyday transactions. Now more than ever, digital skills are important to how populations prepare for the economy of the future, and during two Read More » 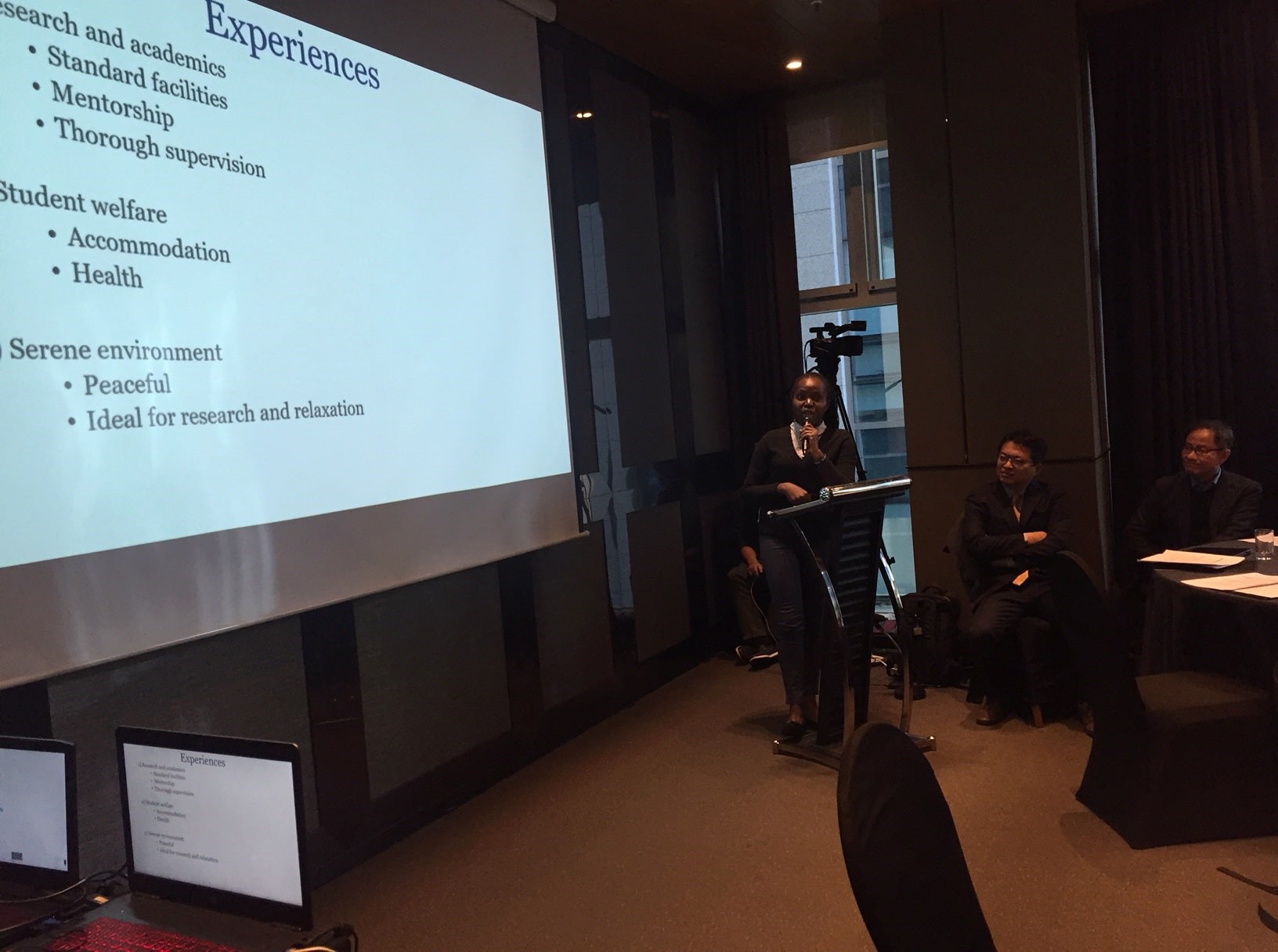 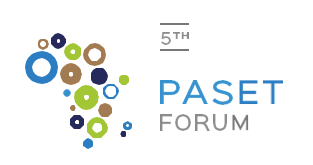 Digital Skills 16 African Countries to Prepare Action Plans - a Technical Assistance Program of PASET and the Digital Economy for Africa
Building digital skills is essential to building an inclusive digital economy across the African continent. This was the takeaway from the 5th PASET Forum hosted in Kigali, Rwanda earlier this year, and the message of Read More » 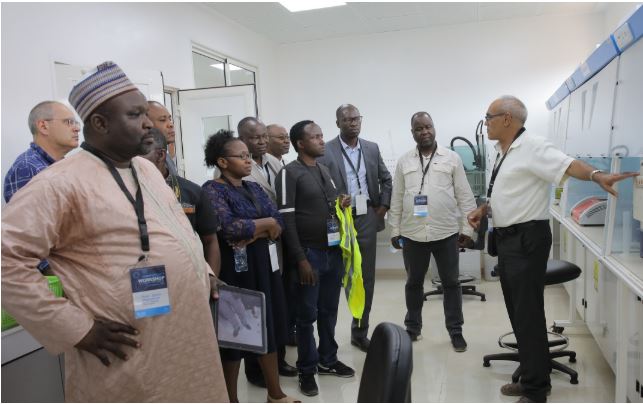 Higher Education
Strengthening Partnerships: Morocco Enhances its Collaboration with PASET RSIF
November 1, 2019 —  The month of September 2019 was marked with new developments for the Partnership for Skills in Applied Sciences, Engineering and Technology (PASET). Read More » 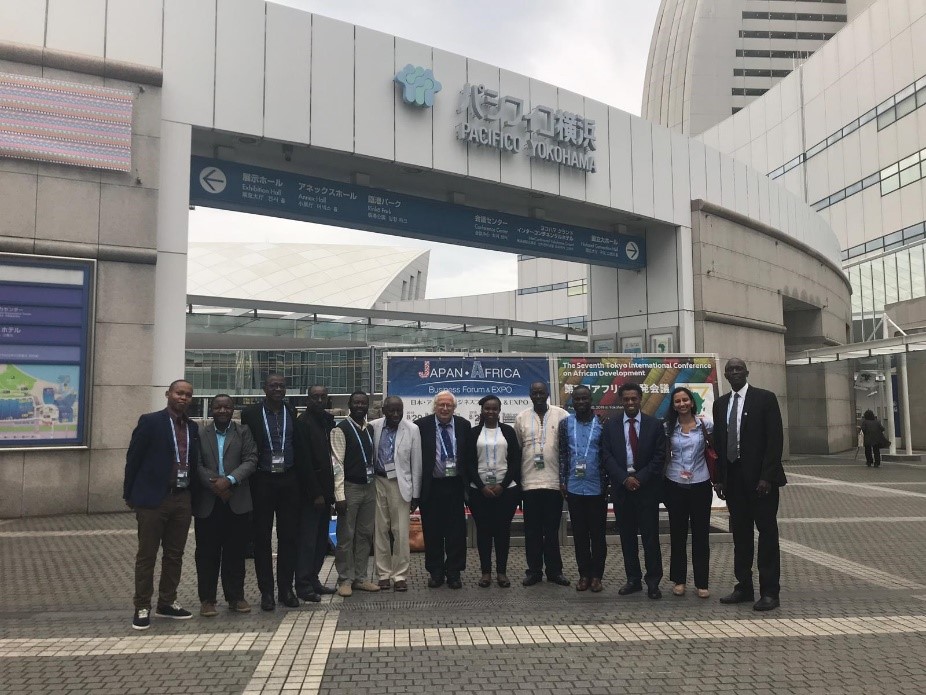 2nd Africa-Japan Higher Education Partnership Workshop along with TICAD 7
October 10, 2019 — Africa and Japan have made further inroads to explore collaboration opportunities in science, technology and innovation (STI) through the pan-African Regional Scholarship and Innovation Fund (RSIF) under Partnership for skills in Applied Sciences, Read More »

For African countries, there is no better time than now to accelerate their socio-economic transformation by developing skilled professionals in applied sciences, engineering and technology (ASET) fields so that millions of youth can integrate faster into an increasingly innovative and technological workforce and address the continent’s challenges through scientific and technical research and innovation. (Watch PASET overview video)

Many African countries now have a Science, Technology and Innovation (STI) policy and have increased their research and development (R&D) budget substantially between 2009 to 2013 (from around 0.3% to 0.6% of GDP).1 Leveraging private capital through technology and innovation hubs and incubators, the continent is developing an environment for R&D and technology-led entrepreneurship to solve various challenges including climate change, food security, health and energy. Yet, on average, only 0.4% of GDP is spent on R&D in sub-Saharan Africa (SSA) compared to the world average of 1.7%. The number of scientists and engineers are still low compared to industrialized countries. The SSA region only has 91 researchers per million inhabitants compared to the world average of 1,083 researchers. SSA countries lack a critical mass of graduates in scientific disciplines.

Revenue from natural resources has been growing for many countries, however, in order to sustain growth, there will need to be a paradigm shift which equips a new generation with the skills to transform raw commodities to higher value products that can compete in global markets, and which will sustain additional foreign direct investment and job creation. Most importantly, a fundamental shift is necessary to orient the continent toward value-added production and manufacturing, enhancements through technology, and innovation in order to find local solutions to development problems.

PASET as a Response

In recognition of this critical need to strengthen science and technology capability for the socio-economic development of SSA, the Partnership for skills in Applied Sciences, Engineering and Technology (PASET) was launched in 2013. 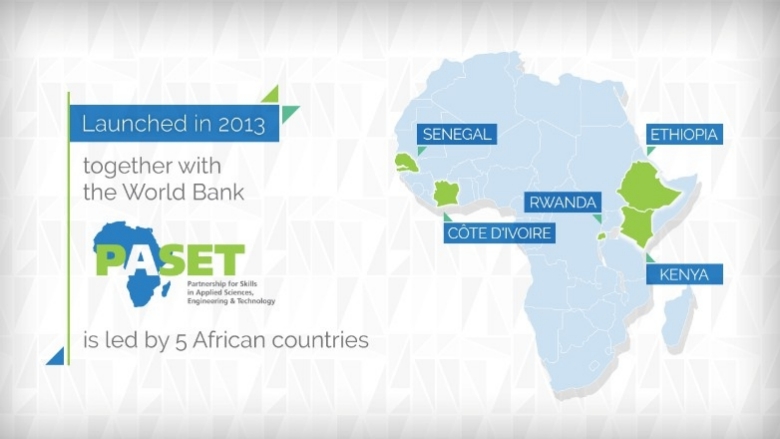 Led by African governments, the Partnership champions a regional approach which complements individual country efforts. It functions as a convening platform by bringing together African governments, the private sector, and new partners, such as Brazil, China, India, and Korea, to invest in Africa. Overall, PASET focuses on maximizing investment in key sectors, while increasing the capacity of universities, research centers and technical and vocational education and training (TVET) centers to generate knowledge and create skilled workforces, researchers and innovators relevant to Africa’s development challenges.

PASET is a unique Africa-led initiative that combines African ownership and leadership with global knowledge. It promotes partnerships between public and private sector as well as with new partner countries with a vision to build African capacity and skills in priority applied sciences, engineering and technology (ASET) fields for the region. PASET supports both regional and country-level initiatives through mobilization of funds, technical assistance and knowledge exchange. Its approach emphasizes good governance, mutual accountability and transparency and allows for broader stakeholder engagement. 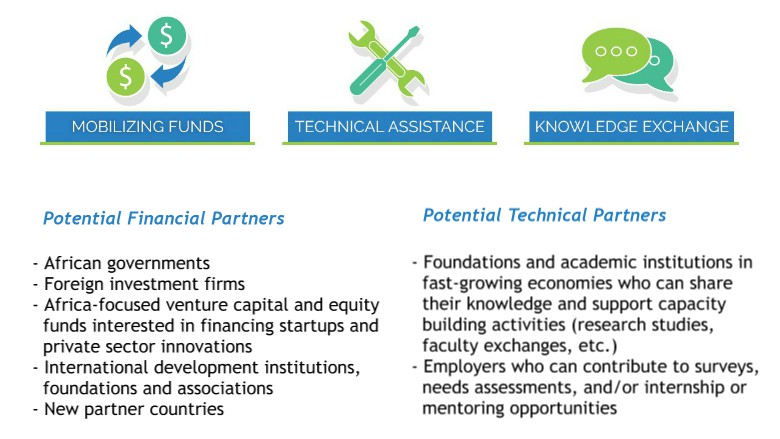 PASET is committed to the following medium-term goals over a 10-year period as outlined in the Call to Action endorsed by key stakeholders in Dakar, Senegal in June 2014:

PASET collaborates with partners to meet its goals. It seeks both financial and technical partners to invest in future researchers, innovators, workforces and universities and training institutions on the continent.

PASET aims to accelerate the creation of a critical mass of highly skilled scientists, researchers, technicians and innovators for priority sectors in sub-Saharan Africa (SSA) through several initiatives. These initiatives are implemented at the higher education as well as technical and vocational skills development levels with overarching technical assistance.

Korea: The Republic of Korea was PASET’s first partner country. It partners with PASET at the government, institutional and university levels. The Ministry of Strategy and Finance supports PASET’s operations through a Trust Fund at the World Bank. Senior officials of Korean institutions like the Korea Development Institute and Human Resources Development Korea are represented on the PASET Board of Directors and Consultative Advisory Group respectively. Universities like the Korea Institute of Science and Technology are international partner universities under the RSIF. Korea has participated in all four PASET Forums and has hosted several knowledge exchange activities for African countries at the higher education and TVET levels. Most recently, Korea’s Ministry of Strategy and Finance signed a Memorandum of Understanding with the World Bank in May 2018 to support PASET’s RSIF initiative through a Trust Fund hosted at the World Bank.

China: PASET has had numerous engagements with China since 2015 when PASET participated in the Investing in Africa Forum organized in Ethiopia and presented on skills development in Africa. The Ministry of Finance of China supports PASET through a Trust Fund managed by the World Bank to promote partnerships on higher education between Africa and China and support the preparation of PASET’s Regional TVET Centers of Excellence initiative. In September 2017, the Chinese Ministry of Finance, Ministry of Education and the World Bank signed a Memorandum of Understanding on a cooperation framework for support to African higher education, science and technology and TVET and there has been an ongoing tripartite collaboration among China, Africa and the World Bank in these areas. There are several vibrant bilateral engagements at the institutional level and Chinese private sector companies have also demonstrated interest in supporting PASET’s activities. In addition, African universities have visited China to learn from their experience in higher education, science and technology.

India: PASET has engaged with India at the TVET and higher education levels. In 2017, India hosted a high-level knowledge sharing visit on skills development for African countries to exchange experiences on the common challenges in skills development across the two regions and approaches to address them. Since then, a formal partnership between the Ministry of Skills Development and Entrepreneurship of India and African countries has been in discussion under the PASET umbrella. A similar partnership dialogue is also ongoing at the higher education level with India’s Department of Science and Technology. India has regularly participated in the PASET Forums.

Brazil: PASET has collaborated with Brazil to learn from its experience in TVET. Brazil hosted African countries in Sao Paulo in 2015 for a TVET-focused learning event co-organized by Servico Nacional de Aprendizagem Industrial (SENAI) and PASET. Brazil has also participated in the PASET Forums to share its unique TVET model. 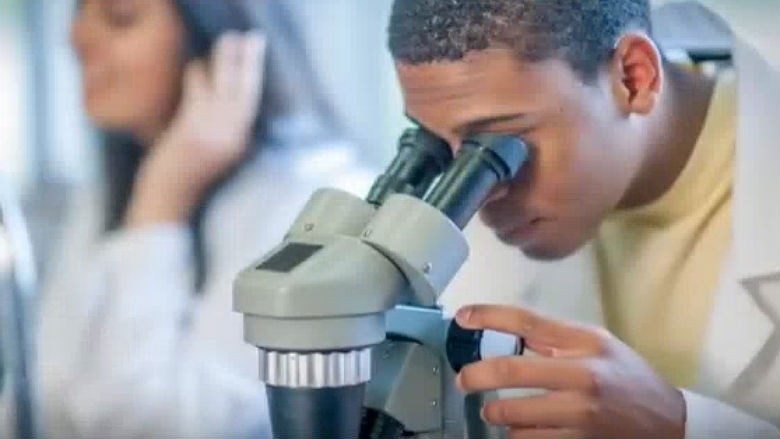 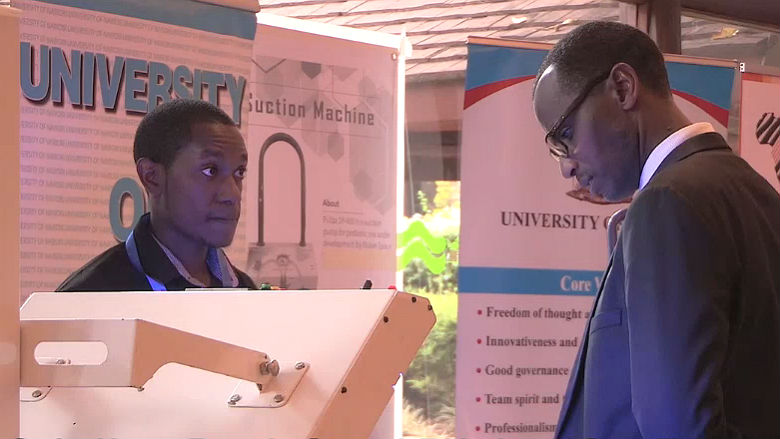