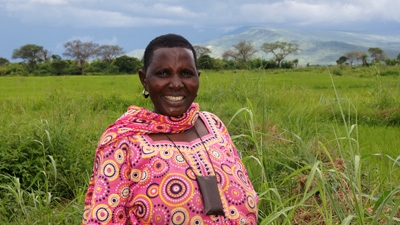 Irrigation schemes throughout Tanzanian villages have increased yields and significantly improved the lives of farmers and their families.

MAGOZI VILLAGE, August 30, 2013 -- In the southern highland village of Magozi where rainfall is scarce, 3,723 farmers are now cultivating land that once seemed like a barren wilderness just a few years ago. During the 2008 harvest season, only 650 ha of land could be cultivated, yielding 2,600 tons of rice. But by 2011 season, the cultivated area had more than doubled to 1,500 ha and yielding 8,250 tons of rice and establishing food self-sufficiency for the first time since 2007.

In the village of Uturo, farmer’s yields have increased to an average of five tons per ha of land, up from 1.5 tons in 2008. In 2006, Iganjo farmers harvested 15 tons of round potatoes per ha twice a year. Today, the farmers are getting 30 tons per season.

This recent agricultural success is the result of irrigation development in Tanzanian villages through various projects financed by the International Development Association (IDA) in collaboration with other development partners throughout the past decade. These include the Agriculture Sector Development Program (ASDP), the Participatory Agricultural Development and Empowerment Project (PADEP), the River Basin Management and Smallholder Improvement Project (RBM SSIP); and the Tanzania Social Action Fund (TASAF). As a result of the investments made through these projects and programs, the total area of land under improved irrigation infrastructure has increased by 51%, from 264,388 ha in 2006 to 399,775 ha in 2012 – and the number of people using irrigation increased from 33,000 in 2005 to 1 million in 2012.

Although the improvement of irrigation schemes is part of a broader government strategy to increase food productivity and security, to the ordinary men and women in these remote villages, the numbers represent more than just increased yields. These farmer’s lives have changed, from once surviving on food aid and living in grass-thatched mud huts, to living in permanent houses with durable roofs and planning three square meals a day. They have gone from using paraffin-fueled wicker lamps and fretting over how they will afford the next school term requirements, to using generators and solar power, and being able to afford better schools for their children.

From Surviving on Food Aid, to Thriving

In 1980, the government moved the residents of Magozi from the Ilolo Ward to the new location some 50kms away. They understood it was for their own safety that they had to leave Ilolo – the area was prone to flooding which rendered it inaccessible for up to six months a year. But to many of them, the alternative seemed like anything but.

Named Magozi for the old village they came from, the new home was not only hot, rainfall was scarce, with only 200 mm to 300 mm per year. Only sorghum was known to grow in the area at the time, but as they settled into the new environment they faced many failures of the otherwise resilient crop. Those who just couldn’t see a future here left for other parts of the country. Those who stayed survived primarily on food aid for about27 years – from various sources including the government, the United Nationals World Food Programme (WFP), Concern International, Japan International Cooperation Agency (JICA), and the Anglican Church.

“Each time we were visited by a leader of any caliber, we only asked for food,” said Fundi Mihayo, 46, the councilor for the ward. “It was like a practiced chorus – ‘we are hungry, please help us!’”

The combined population of 3,800 of the three new villages of Ilolompya, Magozi and Mkombilenge, all named for the respective villages in Ilolo – once shared   just two primary schools. The Ilolompya primary school had four teachers for more than 400 pupils. The alternative primary school at Luganga, was not just further away, but it had three teachers for 300 pupils.

“Every time I came home to visit my family I just felt terrible. Life was so difficult,” said Mihayo, who had fled the area for the coastal Tanga city shortly after they had arrived. “You just couldn’t see a future here at all.”

Determined, the residents cobbled up a traditional structure to get water from the Little Ruaha to their sorghum gardens with little success.

“In 1986, it didn’t rain at all and the sorghum crop never matured –for everyone here across the plain. It never grew beyond knee height,” Mihayo said, gesturing toward the crops.

The irrigation structure they had built didn’t offer much, but when Concern International came on a tour of the area in 1996, they took their visitors to see it. That meeting would prove to be a turning point in the events leading to the birth of the robust village that Magozi is today.

“Concern told us they were interested in helping us improve the irrigation system but they had very limited resources,” Mihayo said. “They asked us to look around for other sources of financing and then get back to them.”

Although some earlier interventions, including an attempt to direct water from the Luganga irrigation scheme 4.5 km away in 2005 ended in failure, a fundraising spirit had been ignited in earnest among the residents and their efforts marshaled resources from various corners such as the Anglican Church, the Japanese Food Aid Counterpart Fund, Concern International and the Government through the District Agriculture Development Grant (DADG) and the District Irrigation Development Fund (DIDF), which are both funded through the Agriculture Sector Development Program.

A modern furrow irrigation scheme with three main canals totaling 39 km was finally brought to completion in 2013, albeit in phases, at the total cost of Sh1.7bn. Today, it streams steadily from atop the Little Ruaha at Magozi, nurturing precious paddy and maize along its path, the enduring proof of a stoic community’s determination to survive against all odds.

While challenges still persist -- including the shortage of water and the inability to complete more canals -- residents today proudly recount milestones that once seemed unreachable:

“If anyone came looking, they would not be able to recruit house maids or laborers from here,” Mihayo said. “Everyone is busy tending their farm as they have tasted the fruits of their labor.”

The community is also investing in its progress. By 2007, all standard seven pupils for up to 13 villages had to struggle for a place in the secondary school at Pawaga. But in 2007, the four villages of Luganga, Mkombilenge, Magozi and Ilolompya started building their own secondary school with a contribution of Sh17, 000 per year, per household.

“With this school now, and the improved financial resources of the parents, this means more of our children can continue with their education, where previously they all stopped at standard seven,” Mihayo said. “These schools were mostly built with our own resources. This is in addition to the other things that we all contribute to such as the scheme’s operation and maintenance.”