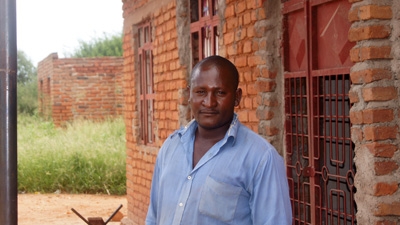 After years of living on food aid supplied by the government, a new irrigation development scheme support by the World Bank, has changed the agricultural landscape for thousands of farmers, and changed their lives for the better. Safari Johnfasi Mdindile, is one of them.

Safari Johnfasi Mdindile, 34, lived as an economic refugee for years, leaving his young family at home while he spent four to six months in Ngambo, Pawaga-Mulenge cultivating land and waiting for his crops to mature. An irrigation scheme had been established in Ngambo years earlier, so Mdindile, like many Magozi residents, decided to try his luck there.

In 2005, as soon as the early phases of the Magozi scheme were completed and  water started flowing to the gardens, Mdindile was among the first exiles to move back to cultivate at home.

“There was really no excuse for me to stay away from my family anymore,” said Mdindile. “We had the land and now we also had some water. It was up to us to make the best of it.”

Seven years after he returning to Magozi, Mdindile harvested 180 bags of rice from his six ha of land– a remarkable improvement from his first harvest of 30 bags on the initial two ha he owned back in 2005. To make the most out of his labors, Mdindile hires a Fuso truck to transport the rice to Iringa town, 60km away, where he processes it to get a good price when he sells it, and he pays to store his rice at a warehouse to sell the remaining rice after season when the market starts to improve.  An 80kg bag of rice could fetch Sh90,000 at harvest, but those who are patient can collect Sh160,000 off-season.

Mdindile’s life continues to change with his farming success. Like most Magozi residents, he lived in a grass-thatched mud house but in 2009 he started building the spacious, five-bedroom brick house which has cost him Sh15m so far. Although it is not yet complete, the family lives in it while work on it continues. His number one priority is to complete it while being able to afford the daily needs of his family. He also owns another house in Iringa consisting of 14 rooms which are rented out. Mdindile also has a motorbike to ease his movement and a power tiller for his farm work.

Mdindile said his childhood friends are stunned on returning home and seeing the area’s amazing transformation. “We see several friends returning from Dar es Salaam and deciding to start their own farms. They feel bad that some of us have moved so far ahead but I always advise them to simply tighten their bootstraps,” said Mdindile, who was only able to complete primary school. “If you don’t have an education like me, you have to make the most of the land that you have been given.”

Apart from managing his own farm, Mdindile  also buys rice from other farmers at harvest time which he adds to his stocks and stores until the price improves. In this sense, he is considered an economic powerhouse as not all farmers can afford the costs related to transporting their crop to the town or market, or the fees for storage, which costs him Sh2,000 per bag for storage.