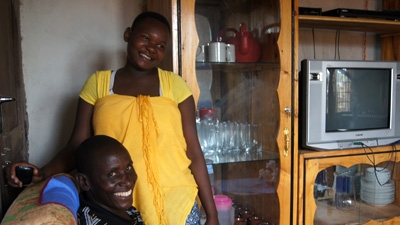 After decades of living on food aid supplied by the government, a new irrigation development scheme support by the World Bank, has changed the agricultural landscape for thousands of farmers, and changed their lives for the better. Patrick Julius Muhegele, 32, is one of them.

Before the completion of the scheme, Patrick Julius Muhegele – or Pati as he is known around Magozi – was growing sorghum on the one ha of land that he owned at the time. He got three or four bags each harvest – twice a year. “There was never enough rain to bring up a good crop even though we were doing our very best,” he said.

But Muhegele never left Magozi. He made the decision to make do with food aid like others who remained while pushing on with the sorghum farming for what it was worth.

“When the scheme was completed, I realized I could grow rice. We knew that those who had started growing it in Pawaga-Mulenge, Luganga and elsewhere were earning a lot of money,” he said. “In 2005, a bag of sorghum could fetch just Sh21,000 per bag and you were never sure the crop would mature. Life was extremely hard, uncertain.”

In 2008, he decided to go fully into rice cultivation on the same land he had been growing sorghum. Gradually, he has been able to purchase more land and now cultivates on four ha. Last year he harvested 200 bags of rice, which he hulls before selling. In the past, he used to store his crop in the town warehouses, but not anymore. On his house, which he started building in 2008, he has added a warehouse with the capacity to store up to 200 bags so that he doesn’t have to pay storage fees in town.

Muhegele, who left school at standard seven, began building his house with proceeds from his very first rice harvest from which he made 50 bags on one ha. He has so far spent Sh8.5m on the cozy three-bed roomed house which has internal plumbing and would be considered complete were it not for the owner’s fixation with detail – the missing ceiling boards and a finishing touch here and there. But Muhegele maintains, “This house is not complete to my full satisfaction, so it is still a priority.”

He lives in the house with his expectant wife and four-year old son and the couple’s plan is to have four children. He has installed cable TV with access to 40 channels and has no regrets for the perk as it just happens to pay its way – when he sets it up in his backyard those who want to watch European soccer or local tournaments pay for a seat.

Pati has a 300 volts generator for his electricity needs and also supplies 10 neighbors who pay   Sh1,000 each per day for the service, or Sh30,000 per month – their most preferred payment plan. The power is only for lights and television and it is switched on from 7pm to 11pm each day. “I use two liters of diesel per day to power the generator so I reckon I have already recovered the money I invested in buying it,” says Muhegele. There are two other electricity suppliers but his generator is the biggest.

He nevertheless points out that the community would have been able to attain more progress if they had access to electricity. “If government could bring us electricity, we all have the potential to do more. My own plan is to bring high capacity hulling machine here to increase my income. Right now I can’t do so because I would have to power it with a diesel-powered generator which makes the rice more expensive and nobody would want to use it. That is why we take our rice all the way to Iringa town for hulling,” he said.

Muhegele also notes the water limitations they still face. “At the moment we are allowed to abstract only 600 liters per second which is enough for 300 ha yet we have more than 1,300 ha being cultivated right now,” he said.