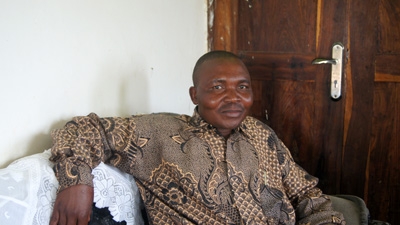 After decades of living on food aid supplied by the government, a new irrigation development scheme support by the World Bank, has changed the agricultural landscape for thousands of village farmers and changed their lives for the better. Fundi Mihayo, 46, is one of them.

In 1994, Mihayo returned to Magozi to visit his family as he had each year for 12 years. Elections for ward councilor were taking place and then-27-year-old decided to contest. Seeing no future in the dry barren land that they had been relocated to, Mihayo had left Magozi in 1986 for Tanga where he undertook vocational training in motor vehicle repair.

“That year it didn’t rain at all and the sorghum crop never matured, for everyone here across the board. It never grew beyond knee height,” says Mihayo. Magozi benefitted from food aid from 1980 – 2007.

In the days when they had just shifted there, the village had neither a shop nor a grain miller. None of the houses had iron roofing. “We bought petrol and other things at a market that took place once a month, if you ran out, that was it – you had to wait until the next month,” says Mihayo.

When he won the councillorship, he met a community raring to go. They had traditional irrigation structures in place and were constantly trying to improve these on their own. When they got visitors one day from Concern International, they expressed their frustration with the continued food aid when what they really needed was water so they could grow their own food. They managed to get Concern International to commit in principle to supporting their cause – but this was conditional upon the community scouting for resources from other entities as well.

One of the conditions for receiving support from the District Irrigation Development Fund (DIDF) is that a community has to contribute up to 20% of the total estimated cost for a project either in cash or in kind through providing labor and/or any other local resources they can marshal. “By 2005 when the weir for the irrigation scheme was being designed, as residents we had delivered to the site 450 trips of stones with each trip weighing seven tons,” says Mihayo.

Driving into the village center today from the western border where he resides, Mihayo still expresses amazement at just how much it has changed, all because of…water.

“What you see here today shows that one can make a concrete difference by simply providing water. We were left with no excuses,” he said.