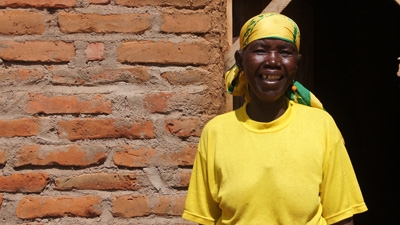 After decades of living on food aid supplied by the government, a new irrigation development scheme support by the World Bank, has changed the agricultural landscape for thousands of farmers, and changed their lives for the better. Fatuma Ngudike is one of them.

A widow for 10 years now, Fatuma Ngudike, 70, has four acres from which she harvests 80 bags of rice per year.

“When my husband died in 2002, he left behind four widows and we were all living in the grass-thatched mud house over there,” she said, gesturing towards a four-roomed structure outside her current brick house.

“Three years ago, I decided to start saving to build a better house. With the 40 bags that I was getting from my farm, I saw it was something that I could afford,” she said. “I always dreamt of living in a better house. So every time I saved some money from selling the crop, I would buy iron roofing sheets which I would keep in the store. Finally, last November, I decided to start building this house. I hope to complete it with the coming harvest and to furnish it.”