The COVID-19 crisis forced emerging and developing economies to exceed their already record-high sovereign debt levels to mitigate the economic impacts of the crisis on families and their domestic economies.1 The average total debt burden among low- and middle-income countries increased by roughly 9 percentage points of gross domestic product (GDP) during the first year of the pandemic, compared with an average annual increase of 1.9 percentage points over the previous decade (figure 5.1).

The resulting buildup of sovereign debt poses significant risks to the worldwide economic recovery. Overindebted governments are unable to pay for public goods such as education and public health care, thereby risking poorer human development outcomes and abrupt increases in inequality.2 Countries in debt distress also have limited capacity to cope with future shocks and may be unable to serve as the lender of last resort to private sector companies in need of public assistance.3

The systemic debt crisis that significantly affected emerging economies in the 1980s illustrates the dire economic and social consequences arising from delayed policy action to mitigate the risks of escalating sovereign debt.4 Many countries in Latin America and Sub-Saharan Africa suffered a lost decade of development: inflation surged, currencies crashed, output collapsed, incomes plummeted, and poverty and inequality increased across regions. The 41 countries that defaulted on their government debt between 1980 and 1985 needed an average of eight years to reach precrisis GDP per capita levels. In the 20 countries with the worst output drops, the economic and social fallout from the debt crisis continued for more than a decade.

The experience of these countries underscores the importance of urgent action to prevent a prolonged debt crisis in the wake of COVID-19. The solution? Countries must manage unsustainable sovereign debt promptly and proactively to minimize its economic and social costs and enable public spending to fuel an equitable economic recovery. The approach depends on the severity of the debt challenges—that is, the stage at which the problem is. The elements of the approach would include the following.

Managing sovereign debt to free up resources for recovery

In countries at high risk of debt distress, proactive debt management can reduce the likelihood of default and free up resources to support economic recovery. Broadly, there are two options for debt management: (1) debt reprofiling—that is, modifications of the aggregate schedule of future country repayments through refinancing, debt substitution, or renegotiations; or (2) debt restructuring—that is, modifications of the financial structure of liabilities to reduce their net present value.

A reprofiling operation could be helpful if a country has multiple loans that come due in the same year or other kinds of accumulation in exposure, such as in the currency composition of liabilities. The sovereign could issue new debt with a longer or more even maturity profile. Debt reprofiling can also help address currency risk, which often adds to debt sustainability concerns. In such circumstances, instead of changing the maturity of existing debt, the debt reprofiling operation would retire existing debt denominated in one currency and issue new debt in another currency.

Sovereigns facing rising default risk also have the option of initiating preemptive negotiations with their creditors to reach a debt restructuring. This option requires transparency in the terms and ownership of the debt. Evidence indicates that preemptive restructurings are resolved more quickly than postdefault restructuring, lead to shorter exclusion periods from global capital markets, and are associated with a smaller output losses.5 In these situations, it is important to minimize the chances that an individual creditor holds out to reap benefit from the operation.

Once a government is in debt distress, the options available for confronting the problem are more limited. A primary tool at this stage is debt restructuring, coupled with a medium-term fiscal and economic reform plan. Optimizing the use of this tool requires prompt recognition of the extent of the problem, coordination with and among creditors, and an understanding by all parties that restructuring is the first step toward debt sustainability—not the last. International financial institutions such as the International Monetary Fund and World Bank often play an important role in the debt restructuring process in emerging economies. They conduct the debt sustainability analyses needed to understand the problem fully, and they often provide financing to make the deal viable.

A swift and deep restructuring agreement allows a more rapid and sustained recovery.6 The historical track record, however, reveals that resolution of sovereign debt distress is often delayed for years. Even if countries enter negotiations with creditors, they often require multiple rounds of debt restructuring to emerge from debt distress (figure 5.2). Nigeria and Poland, for example, each underwent seven debt restructuring deals before finally resolving their unsustainable debt. 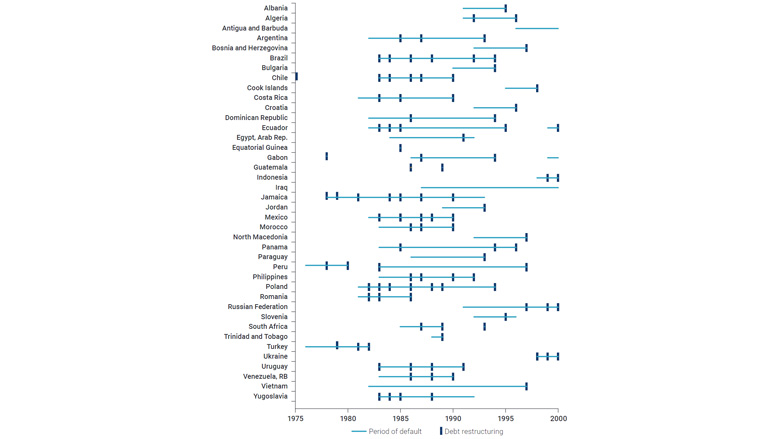 Debt restructuring has played a role in nearly every effort to reduce debt loads and resolve debt distress in emerging markets and emerging economies. Yet it is not the only approach. Governments also often pursue fiscal consolidation and structural reforms—such as improving government revenue streams and controlling the amount and quality of expenditure—to enhance debt servicing capacity.

Less orthodox means of reducing domestic currency–denominated debt have also included liquidation through inflation or financial repression.7 Although these approaches can lead to debt reduction, they are often associated with extremely high social and economic costs that can aggravate poverty and inequality and are thus historically a last resort.

The surge in sovereign debt during the COVID-19 crisis highlights the need for strategies to facilitate granular debt management, debt renegotiation, and access to capital markets over the longer term. Three broad initiatives stand out in the effort to achieve these ends: greater debt transparency, contractual innovations, and tax policy and administration reforms.

Effective, forward-looking debt management requires the comprehensive disclosure of claims against the government, as well as the full terms of the contracts that govern the debt. Recent events have highlighted the problem of hidden or undisclosed debt (such as in Malaysia, Mozambique, and South Sudan) and the possibility of legal disputes over the lack of authority of governmental and quasi-governmental entities to enter into debt contracts (such as in Liberia and República Bolivariana de Venezuela). Transparency in the amounts owed and contractual terms does not guarantee a speedy restructuring, but it certainly sets the stage for more rapid recognition of debt sustainability problems and a swifter, more favorable entry for negotiations.

Contractual innovations, for their part, can help overcome coordination problems and speed up the resolution of sovereign debt restructuring, but they are no panacea. Examples include state contingent debt contracts that insure the borrower against disaster risk; legal reforms that address problematic enforcement practices against states; and collective action clauses (CACs), which may lead to a more rapid resolution.8 These innovations are positive developments for new debt contracts, but fall short of resolving all current issues. They are less relevant for dealing with existing debt that requires restructuring because state-contingent contracts account for a small share of the outstanding debt contracts in emerging markets and contracts that include enhanced CACs account for only about half of outstanding contracts.9

Over the long run, tax policy and administration, along with well-designed public expenditure policy and management, are essential for debt sustainability. Higher tax revenues principally stem from long-term investments in tax capacity and from structural changes in an economy. Property, income, and capital gains taxes are underused revenue generation strategies in most emerging economies. Such a tax policy could mitigate the adverse impacts of the COVID-19 crisis on poverty and inequality. Revenue mobilization strategies should also strengthen the incentives for businesses to formalize.