Chapter 1. The economic impacts of the COVID-19 crisis

The COVID-19 pandemic sent shock waves through the world economy and triggered the largest global economic crisis in more than a century. The crisis led to a dramatic increase in inequality within and across countries. Preliminary evidence suggests that the recovery from the crisis will be as uneven as its initial economic impacts, with emerging economies and economically disadvantaged groups needing much more time to recover pandemic-induced losses of income and livelihoods.1

In contrast to many earlier crises, the onset of the pandemic was met with a large, decisive economic policy response that was generally successful in mitigating its worst human costs in the short run. However, the emergency response also created new risks—such as dramatically increased levels of private and public debt in the world economy—that may threaten an equitable recovery from the crisis if they are not addressed decisively.

Worsening inequality within and across countries

The economic impacts of the pandemic were especially severe in emerging economies where income losses caused by the pandemic revealed and worsened some preexisting economic fragilities. As the pandemic unfolded in 2020, it became clear that many households and firms were ill-prepared to withstand an income shock of that scale and duration. Studies based on precrisis data suggest, for example, that more than 50 percent of households in emerging and advanced economies were not able to sustain basic consumption for more than three months in the event of income losses.2 Similarly, the average business could cover fewer than 55 days of expenses with cash reserves.3 Many households and firms in emerging economies were already burdened with unsustainable debt levels prior to the crisis and struggled to service this debt once the pandemic and associated public health measures led to a sharp decline in income and business revenue.

The crisis had a dramatic impact on global poverty and inequality. Global poverty increased for the first time in a generation, and disproportionate income losses among disadvantaged populations led to a dramatic rise in inequality within and across countries. According to survey data, in 2020 temporary unemployment was higher in 70 percent of all countries for workers who had completed only a primary education.4 Income losses were also larger among youth, women, the self-employed, and casual workers with lower levels of formal education.5 Women, in particular, were affected by income and employment losses because they were likelier to be employed in sectors more affected by lockdown and social distancing measures.6

Similar patterns emerge among businesses. Smaller firms, informal businesses, and enterprises with limited access to formal credit were hit more severely by income losses stemming from the pandemic. Larger firms entered the crisis with the ability to cover expenses for up to 65 days, compared with 59 days for medium-size firms and 53 and 50 days for small and microenterprises, respectively. Moreover, micro-, small, and medium enterprises are overrepresented in the sectors most severely affected by the crisis, such as accommodation and food services, retail, and personal services.

The short-term government responses to the crisis

The short-term government responses to the pandemic were extraordinarily swift and encompassing. Governments embraced many policy tools that were either entirely unprecedented or had never been used on this scale in emerging economies. Examples are large direct income support measures, debt moratoria, and asset purchase programs by central banks. These programs varied widely in size and scope (figure 1.1), in part because many low-income countries were struggling to mobilize resources given limited access to credit markets and high precrisis levels of government debt. As a result, the size of the fiscal response to the crisis as a share of the gross domestic product (GDP) was almost uniformly large in high-income countries and uniformly small or nonexistent in low-income countries. In middle-income countries, the fiscal response varied substantially, reflecting marked differences in the ability and willingness of governments to spend on support programs.

Similarly, the combination of policies chosen to confront the short-term impacts differed significantly across countries, depending on the availability of resources and the specific nature of risks the countries faced (figure 1.2). In addition to direct income support programs, governments and central banks made unprecedented use of policies intended to provide temporary debt relief, including debt moratoria for households and businesses. Although these programs mitigated the short-term liquidity problems faced by households and businesses, they also had the unintended consequence of obscuring the true financial condition of borrowers, thereby creating a new problem: lack of transparency about the true extent of credit risk in the economy.

The large crisis response, while necessary and effective in mitigating the worst impacts of the crisis, led to a global increase in government debt that gave rise to renewed concerns about debt sustainability and added to the widening disparity between emerging and advanced economies. In 2020, 51 countries—including 44 emerging economies—experienced a downgrade in their government debt risk rating (that is, the assessment of a country’s creditworthiness).7

Emerging threats to an equitable recovery

Although households and businesses have been most directly affected by income losses stemming from the pandemic, the resulting financial risks have repercussions for the wider economy through mutually reinforcing channels that connect the financial health of households, firms, financial institutions, and governments (figure 1.3). Because of this interconnection, elevated financial risk in one sector can spill over and destabilize the economy as a whole. For example, if households and firms are under financial stress, the financial sector faces a higher risk of loan defaults and is less able to provide credit. Similarly, if the financial position of the public sector deteriorates (for example, as a result of higher government debt and lower tax revenue), the ability of the public sector to support the rest of the economy is weakened. 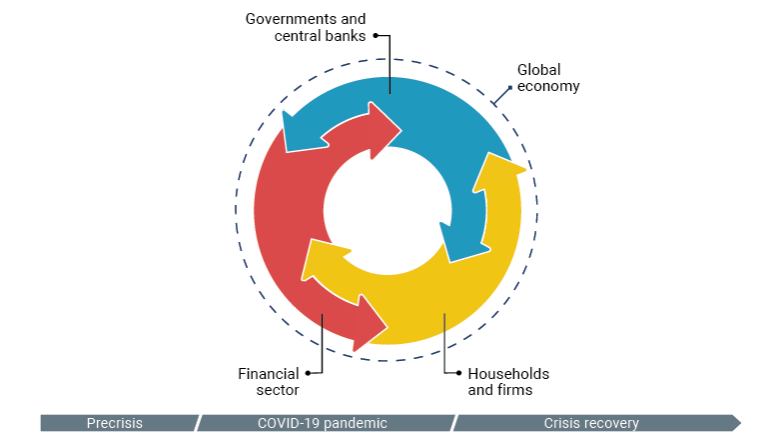 This relationship is, however, not predetermined. Well-designed fiscal, monetary, and financial sector policies can counteract and reduce these intertwined risks and can help transform the links between sectors of the economy from a vicious doom loop into a virtuous cycle.

Similarly, governments, central banks, and regulators used various policy tools to assist financial institutions and prevent risks from spilling over from the financial sector to other parts of the economy. Central banks lowered interest rates and eased liquidity conditions, making it easier for commercial banks and nonbank financial institutions such as microfinance lenders to refinance themselves, thereby allowing them to continue to supply credit to households and businesses.

The crisis response will also need to include policies that address the risks arising from high levels of government debt to ensure that governments preserve their ability to effectively support the recovery.   This is an important policy priority because high levels of government debt reduce the government’s ability to invest in social safety nets that can counteract the impact of the crisis on poverty and inequality and provide support to households and firms in the event of setbacks during the recovery. 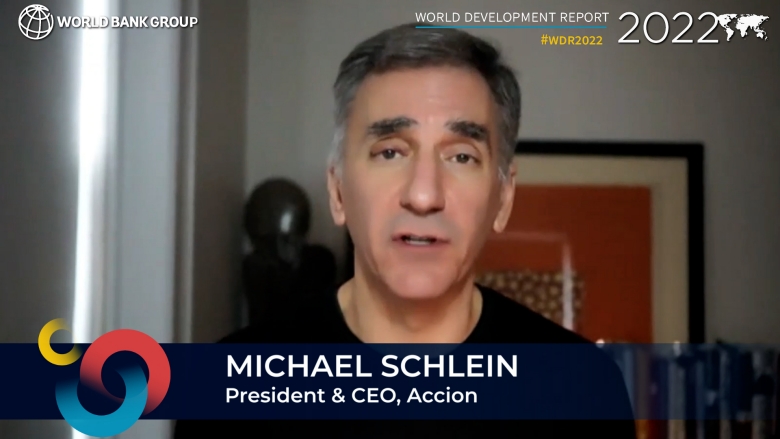 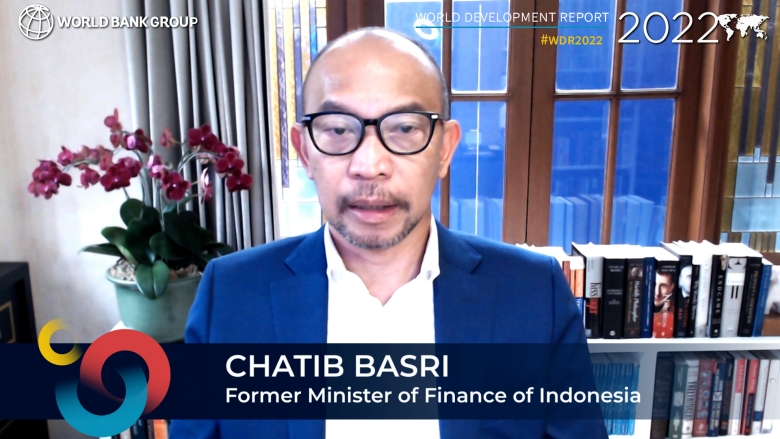