The objective of the Online Quarterly Bulletin is to showcase the debt statistics data and the availability of high frequency data on external and domestic debt. The Bulletin serves as a vehicle for providing users with regular updates on trends in external and public sector borrowing by developing and high income countries, as well as showcasing innovations in data capture and presentation. The Online Quarterly Bulletin is divided into three sections. The first section is a feature story that highlights a topical aspect of monitoring and managing debt statistics. The second section provides analysis and trends of the debt statistics, using graphs to highlight the main messages. The third section is used to provide information on key activities related to debt statistics. This edition of the bulletin familiarizes users with the extensive coverage and content of the debt data that the Bank makes available and the links between data reported to the Quarterly External Debt Statistics (QEDS) and the Public Sector Debt (PSD) and that collected through the World Bank Debt Reporting System (DRS) and published in International Debt Statistics (IDS).

Where can you find debt statistics?

For nearly half a century policymakers, academics, and journalists have relied on external debt statistics collected through the World Bank Debt Reporting System (DRS) and published annually in the International Debt Statistics (IDS) publication, and its predecessor World Debt Tables, to identify financial trends and vulnerabilities. The DRS captures data for low- and middle-income countries.Reporting to the DRS is mandatory for all countries that borrowing from the World Bank (IBRD or IDA). Not so widely appreciated is the fact that this annual data is complemented by high frequency quarterly external and public debt statistics captured through the Quarterly External Debt Statistics (QEDS) and the Public Sector Debt (PSD). QEDS and PSD include data for high-income and low- and middle-income countries. Reporting to these systems is actively encouraged and more than 130 countries participate on a voluntary basis. In addition to the information published in IDS extensive compilations drawn from the DRS data are also available through the World Bank Open Data website. 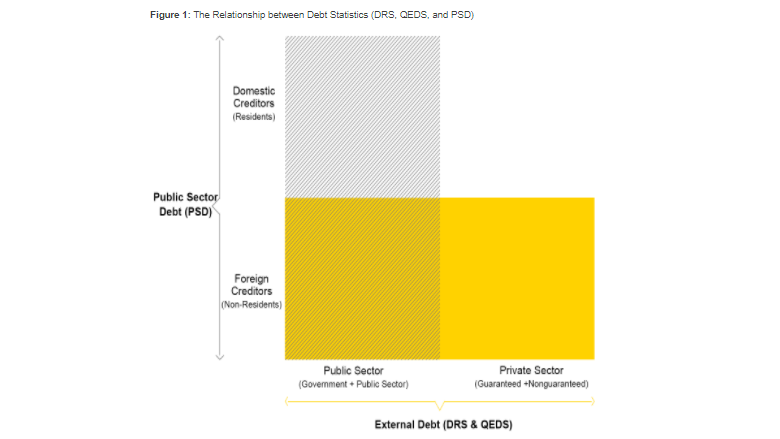 DRS and QEDS - What do they measure?

The DRS and QEDS measure the external debt obligations of an economy but with differences in how data are recorded and presented that reflect the analytical requirements of users. The core aim of the DRS is to provide a comprehensive picture of a country's external borrowing activities, including its access to official and market-based sources of external financing and related borrowing costs. This serves as a basis for analysis of debt burdens, debt-servicing capacity, financing needs, and creditworthiness. The DRS measures both stocks and flows; at the individual loan level for public and publicly guaranteed debt The standard aggregations of the data are (a) maturity - long- and short-term debt; (b) borrower type - public (and publicly guaranteed) and private sector (non-guaranteed) borrowing; and (c) creditor type – official (bilateral and multilateral) and private (bonds, banks and other private lenders). In contrast the focus of QEDS, which measures only debt stocks, is on the external obligations of the five key borrowing sectors of the economy.1 The DRS and QEDS use a common definition for short-term and long-term debt: short-term debt is debt with an original maturity of one year or less: long-term debt is all debt with an original maturity greater than one year; and interest arrears are considered to be short-term debt.2

DRS and QEDS – What is the country coverage?

In the first three quarters of 2015, low- and middle-income countries reporting to QEDS recorded a 3 percent decline in external debt stocks from the end 2014 level. Driving the trend were the top ten borrowers,3 who together account for almost 80 percent outstanding external debt of low- and middle-income countries reporting to QEDS. On average they saw short-term external debt contract 12 percent by end September 2015 compared to a marginal (1 percent) rise in external long-term debt over the same period. Predictably, oil-exporters and countries in the group hit hardest by the global economic downturn recorded the largest percentage decline in external short-term debt stocks: Kazakhstan decreased 31 percent, Mexico 24 percent, and China and South Africa 14 percent. Long-term external debt trends were divergent with increases in Colombia and India of 9 percent and 7 percent, respectively, offset by the 7 percent contraction in Brazil's long-term external debt stock (figure 3). Countries reporting to QEDS, other than the top 10, recorded a more moderate 3 percent drop in short-term debt in 2015 (end-September).

The external debt outstanding of low- and middle-income countries4 at end 2015 is estimated to be around $5.4 trillion. This level is largely on a par with that of the 2014 level. This reflects the expectation that the sharp contraction in short-term debt recorded by many countries was offset by increased long-term debt across most regions: based on data reported to QEDS and information from creditor sources (official and private). In the East Asia and Pacific region external debt stocks are estimated to have declined 5 percent primarily on account of the sharp contraction in China's short-term debt. In Latin America and the Caribbean, region offsetting trends in Brazil and Mexico, resulted in a marginal (1 percent) decline in external debt stocks in 2015. Elsewhere the trajectory was upward. In South Asia and Sub-Saharan Africa, external debt outstanding is estimated to have risen 7 percent and 10 percent, respectively, in 2015 on the back of a marked increase in long-term public and publicly guaranteed debt. Countries such as Ethiopia, Kenya, India and Sri Lanka posted some of the largest increases among all low- and middle-income countries. Similarly, in Europe and Central Asia and the Middle East and North Africa long-term borrowing outpaced the decline in short-term flows to push external debt stocks up 5 percent.

The Tenth UNCTAD Debt Management Conference sponsored by the United Nations Conference on Trade and Development (UNCTAD) took place in Geneva from November 23-25, 2015 with participants from over 90 countries, 18 international organizations and representatives from NGOs and academia. The conference provides a regular, biennial, forum for an exchange of experience and views on evolving debt trends and debt management challenges in the broader macro-economic context. This time the primary focus was the challenge to debt sustainability in low- and middle-income countries generated by instability in global financial markets, falling commodity markets, and changing policy regimes in advanced economies. Other key issues discussed included: managing contingent liabilities the arising from exogenous economic shock, natural disasters, and climate changes; new tools for managing risk; the absence of an effective and comprehensive mechanism for dealing with sovereign debt crises; and capacity building in the increasingly complex day-to-day business of managing debt.

The Inter-Agency Group on Economic and Financial Statistics (IAG). DECDG represents the Bank at meetings of the IAG which take on a regular basis: the most recent in December 2015. This group was created in late 2008 is response to the global financial crisis to coordinate the work of international agencies engaged in the collection and compilation of economic and financial statistics and address key information gaps. In this regard, IAG has played a central role in the G-20 Data Gaps Initiative (DGI-1). The Bank, in cooperation with the IMF, led implementation of Recommendation 18 – the launch of a unified database on Public Sector Debt statistics (PSD). Initially focused on low- and middle-income countries it has, in partnership with OECD and EuroStat, since been extended to the advanced, high-income economies. At the Global Conference in December 2015 IAG was tasked with coordination and implementation of the second round of the Data Gaps Initiative (DGI-2). In this context, the Bank will take a lead role with respect to public sector debt data (DGI-2 Recommendation 16) with the objective of creating a fully comprehensive quarterly debt data on general government debt, in conformity with internationally agreed standards.

1The sectors are: general government; central bank; deposit-taking corporations except the central bank; other sectors; direct investment and intercompany lending.

2This conforms to the International Investment Position (IIP) definition for short-term and long-term debt.

3Defined as those with the highest level of debt outstanding at end 2014 as published in International Debt Statistics 2016.

4Defined as the 120 countries reporting to the DRS and for which data were published in International Debt Statistics 2016.

The Debt Bulletins and Debt Reports are published online, at regular intervals, over the course of the year and complement the International Debt Statistics.