Part 1 of this year’s Global Monitoring Report provides details on ongoing efforts to eradicate extreme poverty. It notes global poverty has continued to decline, but warns that significant work remains to be done if the ambitious goal of eradicating extreme poverty is to be met over the next 15 years. To eradicate poverty “in all of its forms and everywhere,” the policy discourse needs to focus more directly on the poorest of the poor and tackle more fully the non-income dimensions of poverty.

The report introduces a new international poverty line of $1.90 a day: the minimum amount needed to meet the most basic needs in 15 of the poorest countries in the world. The World Bank projects the number of poor fell to 702 million in 2015 from 902 million in 2012, and that the for the first time, less than 10 percent of the world’s population is living in extreme poverty.

Despite continued progress, poverty remains unacceptably high and is becoming increasingly concentrated in Sub-Saharan Africa. Poverty is also increasingly prevalent in countries that are dependent on natural resources and in fragile and conflict- affected states. Adverse impacts from climate change are also expected to pose significant obstacles to poverty reduction.

To end extreme poverty and boost shared prosperity, the World Bank urges countries to pursue broad-based economic growth, invest in people, and insure the poor and vulnerable against ever-changing risks. 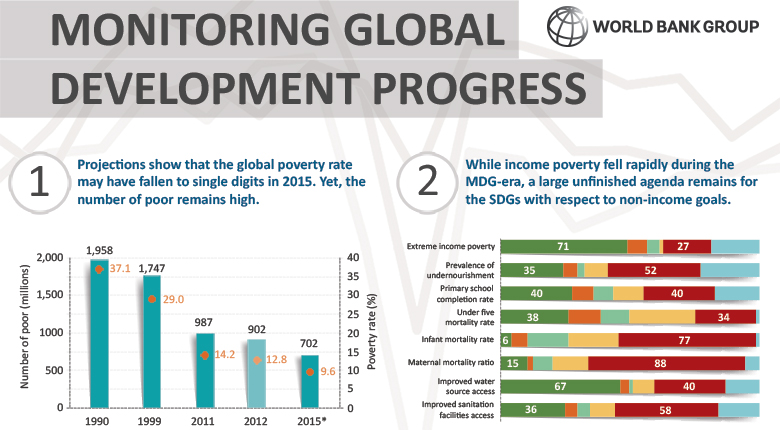