The World Bank Debtor Reporting System (DRS) and the Quarterly External Debt Statistics (QEDS) both measure external debt stocks but they do so from different optics and levels of disaggregation. The DRS demands loan-by-loan reporting of public and publicly guaranteed debt and aggregate reporting for the non-guaranteed debt of the private sector. QEDS requires aggregate reporting in conformity with The External Debt Guide for Compilers and Users (2013). It recommends a primary presentation of external debt by the main institutional sectors of the economy. These are defined in the IMF Balance of Payments Manual (Sixth Edition) as the General Government Sector, Monetary Authorities Sector (Central Bank and other deposit-taking corporations) and Other Sectors. In addition, intercompany lending is separately identified. The IMF Special Data Dissemination Standard (SDDS) and General Data Dissemination Standard (GDDS), which underpin the Quarterly External Debt Statistics (QEDS) are based on presentation of data according to this criterion.

The DRS uses a classification by debtor as the primary criterion for presentation and publication of external debt data, and, below that a sub-division by type of creditor. The DRS identifies seven categories of debtor:

The correlation between the DRS debtor categories and the institutional sectors of the economy that underpin reporting to QEDS for countries following either the Special or the General data dissemination standards (SDDS and GDDS) is set out below (Figure 1).

Figure 1: Link between the categories of debt in DRS and QEDS 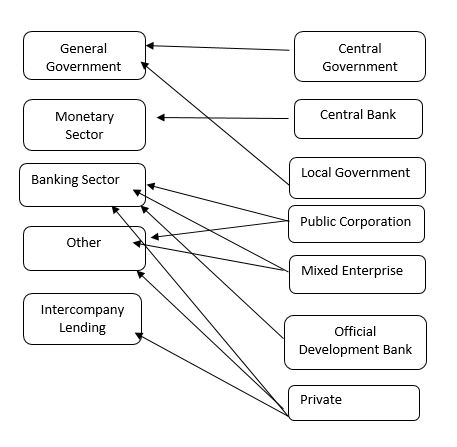 There are many complementary aspects of DRS and QEDS data as data on short-term debt illustrate. Countries reporting to the DRS are obligated to provide information only on their long-term external debt obligations. As a service to users the World Bank includes information on the total stock of countries’ short-term debt in its annual publication International Debt Statistics and the related online database. These data are captured from national sources, increasingly through reporting to QEDS, or from the information collated by the Bank for International Settlements (BIS). The QEDS reporting requirement asks for data on both long-term and short-term external debt stock for each institutional sector of the economy. This disaggregation enables users to identify those sectors of the economy most reliant on short-term debt financing and to make cross-country comparisons.

In 2015 the external debt stock of low- and middle-income countries declined for the first time in two decades. The data, presented in International Debt Statistics 2017 released in December 2016, confirm this outcome was driven by a sharp contraction in short-term debt flows, which swung from a net inflow of $130 billion in 2014 to a massive $398 billion outflow in 2015. Long-term debt flows also contracted. They remained positive but dropped to $214 billion – half the 2014 level. As a result external debt stocks fell 6 percent to $6.7 billion. China, which accounted for over 21 percent of the combined external debt of low- and middle-income countries, drove the global trend. Excluding China, end-2015 external debt stock totaled $5.3 trillion, only marginally below the end 2014-level.

The gross external debt position of high-income countries reporting to the QEDS stood at $70.2 trillion at end June 2016. This represented an average increase of 4.2 percent over the comparable figure at end-2015 and a rate of increase more than double that of low- and middle-income countries. Most high-income countries saw external debt stock rise in the first half of 2016, some significantly. It jumped 20 percent in Japan and by over 10 percent in Belgium, Lithuania and Latvia. Iceland continued its two-prong program of consolidation of public debt and implementation of rigorous public borrowing guidelines and saw its gross external debt position contract by 16 percent in the first half of 2016. Elsewhere declines over the same period were moderate and led by Uruguay (down 5 percent), Ireland (4 percent) and Croatia (3 percent).

The main driver of the overall increase in the gross external debt position of high-income countries was an increase in the external debt liabilities of deposit-taking corporations (except central banks), which rose by 5 percent to $22.2 trillion. Also adding to the increase was a rise in external debt liabilities of the General Government, Other Sectors and Direct Investment: Intercompany Lending which all rose by an average of 4 percent. Chile, followed by Norway then Japan, recorded the highest increase in the external debt of the General Government. The external stock of Central Banks rose by 9 percent to $3.0 trillion, but this increase had a much smaller impact on the overall gross external debt stock of high-income reporting countries since such debt constitutes only 4 percent of the total. However, in countries recording the sharpest rise in external debt stock of Central Banks increases were significant; 204 percent in the case of both Latvia and Poland, 117 percent in Belgium and 75 percent in Japan.

International Debt Statistics 2017 was released on December 14, 2016. This edition provides more than 200 time series indicators from 1970 to 2015 for the 125 reporting countries. This year’s publication has been reconfigured in order to provide more comprehensive analysis on external debt stocks and flows, within the broader framework of global aggregated net capital flows (debt and equity) to low- and middle-income countries. It draws on the detailed information provided to the World Bank Debtor Reporting System (DRS) and also extends to the high frequency, quarterly external debt and public debt captured in QEDS and public sector database QPSD that include data for high-income countries. The analysis aims to guide users of the data of the key factors driving trends and volumes in debt and equity flows at the level for individual countries, regional groupings and global aggregates. It also alerts them to, and elaborates on important methodological issues that have significant impact on the data series of specific countries.

The 2016 Meeting of the Inter-Agency Group on Economic and Financial Statistics(IAG), hosted by the International Monetary Fund (IMF) took place in Washington D.C. on December 1-2, 2016. The main focus of the meeting was to take stock of the status of the G20 recommendations in respect of the Data Gaps Initiative (DGI) and to follow up on implementation of the second phase. The target of DGI-2 Recommendation 16 (Public Sector Debt Statistics 2021) is for all G-20 economies to report both general and central government debt statistics on a quarterly basis to the World Bank/IMF/OECD Public Sector Debt Database (PSD). It was agreed the World Bank would continue to take the lead in coordinating implementation of this component of DGI-2. Other members of the group committed to do all they can to encourage G-20 countries to meet this goal. Additionally, the IAG established the Country Engagement Group with representation from the IMF, World Bank, COMSEC and UNCTAD, to develop a pilot project aimed at persuading more low- and middle-income economies to report to the PSD.

The Main Institutional Sectors of the Economy (QEDS)

General government: The government of a country consists of the public authorities and their agencies, which are entities established through political processes that exercise legislative, judicial, and executive authority within a territorial area. An additional characteristic of government is that these activities must be financed primarily by taxation or other compulsory transfers. It comprises Government units that exist at each level—central, state, or local of government within the national economy; all social security funds operated at each level of government; and any non-market non-profit institutions that are controlled and mainly financed by government units. The definition of this sector is consistent with the definition in the 1993 SNA, excepting for the exclusion of Monetary Authorities.

Monetary Authorities: The Central Bank, or currency board, monetary agency, etc., and any other operations that are attributable to the central bank but carried out by other government institutions or commercial banks. These operations include the issuance of currency; maintenance and management of international reserves, including transactions with the IMF and the operation and management of exchange rate stabilization funds. The definition of this sector is consistent with the IMF balance of payment concepts as set out in the IMF Balance of Payments Manual (Sixth Edition).

Banking Sector: This sector is identical to the “other (than the central bank) depository corporations” sub-sector of the financial corporate sector defined in the United Nations System of National Accounts 2008. It includes all resident units engaged in financial intermediation as a principal activity and having liabilities in the form of deposits payable on demand, transferable by check, or otherwise used for making payments, or having liabilities in the form of deposits that may not be readily transferable, such as short-term certificates of deposit, but that are close substitutes for deposits and are included in measures of money broadly defined. In addition to commercial banks, the banking sector encompasses institutions such as savings banks, savings and loan associations, credit unions or cooperatives, and building societies. Post office savings banks or other government-controlled savings banks are also included if they are institutional units separate from the government.

Intercompany Lending: Liabilities under a direct investment relationship are separately identified. Equity liabilities arising from a direct investment are excluded from external debt. These instruments are equity capital and reinvested earnings (comprising equity in branches, subsidiaries, and associates)

The Debt Bulletins and Debt Reports are published online, at regular intervals, over the course of the year and complement the International Debt Statistics.