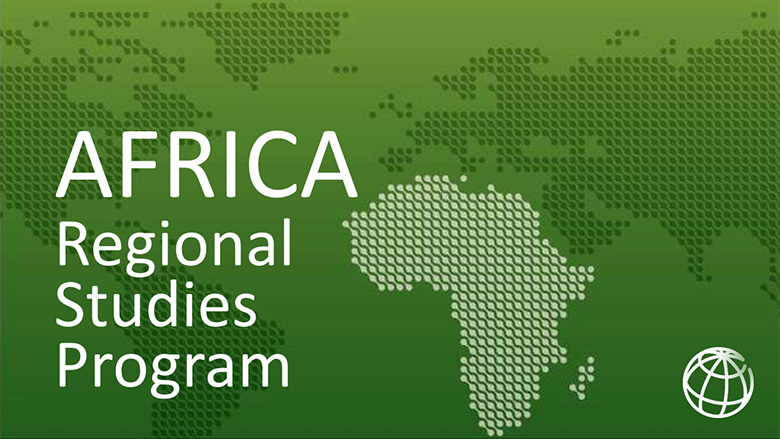 The Africa Regional Studies Program, managed by the Office of the Chief Economist for Africa, is open to researchers across the World Bank Group. It seeks to sponsor the production of several in-depth studies with financial and analytical support. It does so by providing funds to carry out and creating the for authors to share ideas and receive feedback from top experts on the topics they are exploring. The Chief Economist for the Africa Region serves as the head of the research program, leading regional efforts to select the best and more relevant topics for research, chairing all review meetings, and clearing all final reports for publication.

The focus of the Africa Regional Studies varies every year, reflecting current policy questions in Sub-Saharan African countries. It has covered such issues as youth employment, conflict, vulnerability and risk, and structural transformation, among others. Some of the studies are led by researchers in the Chief Economist Office of the Africa Region, who assemble a team of cross-sectoral experts from inside and outside the World Bank. Others are led by staff sitting in Global Practices with similarly diverse teams.

Several Africa Regional Studies are published as books in the Africa Development Forum Series, the premier collection of World Bank research on Africa, sponsored by the Agence Française de Développement and the World Bank. The manuscripts chosen for publication in these series represent the highest quality in each institution’s research activities and are selected for their relevance to the development agenda following an external review process.

Albert G. Zeufack
Albert G. Zeufack is the World Bank’s Chief Economist for Africa. He received his Ph.D. in Economics from CERDI, the University of Clermont-Ferrand (France) where he taught before joining the World Bank. Prior to his appointment in May 2016, he was Practice Manager in the Macroeconomics and Fiscal Management Global Practice. He has held several positions in the institution in Africa, East Asia and Pacific, Europe and Central Asia regions. Between 2008 and 2012, on leave from the World Bank, Albert was the Director of Research and Investment Strategy/Chief Economist for Khazanah Nasional Berhad, a Malaysian Sovereign Wealth Fund. More

César Calderón is a Lead Economist in the Office of the Chief Economist of the Africa Region. He holds a Masters’ Degree and a Ph.D. in Economics from the University of Rochester, New York. Since 2014, he has been a core team member of the “Africa’s Pulse,” regional flagship on recent macroeconomic developments in Sub-Saharan Africa. Cesar has worked on issues of open economy macroeconomics, growth and development and is currently working on issues of dynamics of capital flows and their link to boom-bust cycles in finance, trade diversification and growth, and policy determinants of macroeconomic resilience. More

Zainab Usman
Zainab Usman is a Public Sector Specialist at the Office of the Chief Economist, Africa Region. She holds a Ph.D. from the University of Oxford.  Prior to joining the World Bank, Zainab worked at the Blavatnik School of Government, taught the Politics, Philosophy and Economics (PPE) course at the University of Oxford and consulted for the UK Department of International Development (DfID), the Nigerian Government and the World Economic Forum (WEF). Zainab’s research is on the governance and institutions of natural resources management, energy sector reforms and service delivery in Africa as well as south-south economic relations. More