Growing with Jobs in Europe and Central Asia

“Jobs are key to lifting people out of poverty and ensuring that prosperity is shared by all. Good jobs can also empower people and enhance their voice and participation in society,” said Laura Tuck, World Bank Vice President for Europe and Central Asia. “The jobs challenge in countries of Europe and Central Asia is pressing. But it is not insurmountable; and the good news is that many countries in the region are already showing the way by making the necessary reforms. We hope the analysis and recommendations of our new report will further inform policy making in the region.” 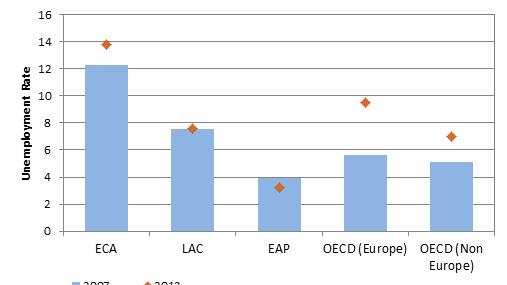 According to the report, employment creation in the region was slow even before the crisis (2000-2007), when the region grew faster than many other emerging economies. ECA economies and employment levels in particular were then severely affected by the 2009 crisis; and job creation remains sluggish in the post-crisis recovery. In 2012, the average unemployment rate for Europe and Central Asia stood at 14 percent. A worrying factor is that about half of all unemployed people have been looking for a job for more than a year. Young and older workers, women, and ethnic minorities are more likely to be jobless or employed in informal or low-wage jobs. For example, one in five young people in ECA is neither working, nor searching for work, nor studying.

In analyzing the factors behind this worrying situation, the report arrives at five main conclusions:

Policies to address the jobs challenge in the region need to reckon with the legacy of centrally planned economies, which is related to the speed of reforms towards modern market economies, and also with the mounting demographic pressures due to the rapid aging of the population in most of ECA countries and a large number of youth entering the labor market in Turkey and Central Asian countries.

“To create more and better jobs, policy makers need to go beyond traditional labor market policies and regulations,” said Carolina Sanchez-Paramo, World Bank Sector Manager for Poverty Reduction and Economic Management in Europe and Central Asia and a co-author of the report. “While policies will have to be tailored to each country’s stage of economic modernization and demographic imperatives, efforts on several fronts are needed for a vibrant private sector that creates jobs: continuing the process of reforms and enterprise restructuring; promoting entrepreneurship; improving the business environment and prudent access to finance to enable business expansion; increasing integration in global markets; and fostering agglomeration economies though better infrastructure connectivity and logistics.”

To better prepare workers for new job opportunities, the report recommends policies to help workers acquire skills for the modern workplace; removing work disincentives and other barriers that keep people out of productive employment, including obstacles to internal migration.

“Due to high labor taxes and social protection systems that remove benefits abruptly or ban formal work for welfare beneficiaries, it often does not pay off for workers, especially low-wage earners, to have formal jobs,” said Omar Arias, World Bank Sector Manager for Human Development Economics and a co-author of the report. “Faster job creation will require changes in the social contract between workers, enterprises, and governments. Modernizing education and training systems to adapt better to fast-changing labor markets, and making pensions, social benefits, labor taxes, and regulations compatible with longer and more productive working lives are critical to achieving sustained job creation and shared prosperity in Europe and Central Asia.”

Chapter 1: The Role of Legacy and Demographics (PDF)