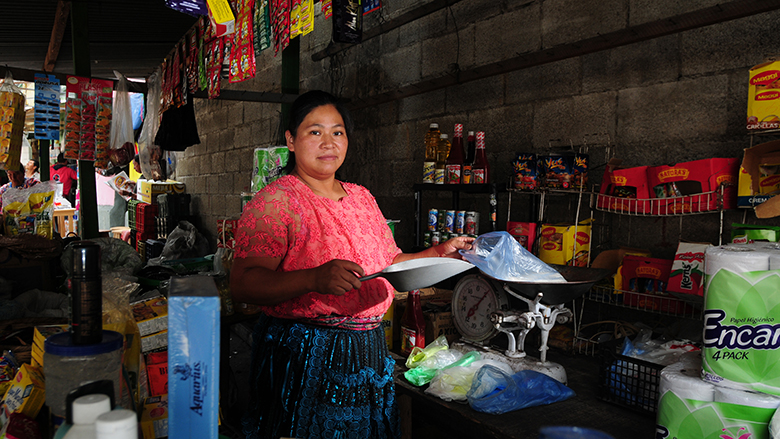 As 2021 ends, we take a retrospective look at five topics that were covered in our analytical work this year. These issues represent just a fragment of the Bank's work, but they are key to reducing poverty and hunger while slowing climate change.

Like the previous year, news in agriculture and food in 2021 was dominated by deteriorating food security. Approximately 30 percent of the world’s population lacked access to adequate food in 2020 and into 2021.

The World Bank took action to fight food insecurity around the world, providing immediate aid to vulnerable households and more long-term support to farmers in the form of seeds, fertilizer, and other agricultural inputs.

COVID-19 also pushed more people into poverty and made the poor poorer around the world. This, along with supply chain interruptions and rising prices had a major impact on hunger. To learn more about these impacts, read this brief compiled by the Bank and updated at least once a month.

Our new podcast series, Table for 10 Billion, launched in March examined the causes of growing hunger and offered some surprising answers.

Farming Insects for Food and Feed

This December, the Bank released a ground-breaking report looking at the valuable role farming insects can play in both food security and climate-smart agriculture, Insect and Hydroponic Farming in Africa: The New Circular Food Economy.

While two billion people regularly eat insects harvested in the wild, farming them for food at scale is new. The report found that African insect farming could generate crude protein worth up to US$2.6 billion and biofertilizers worth up to US$19.4 billion. That is enough protein meal to meet up to 14% of the crude protein needed to rear all the pigs, goats, fish, and chickens in Africa.

Key benefits of insect farming include:

For more on farming insects and the role they can play in the food system, take a listen to this episode of the Table for 10 Billion podcast.

While agriculture currently accounts for about 25% of greenhouse gas emissions, it also offers opportunities to both fight climate change and feed more people as the world’s population grows to 10 billion people by 2050. One of the keys will be changing the way agriculture is financed and incentivized.

A report from the Bank, published in September, explains the US$12 trillion in annual hidden social, economic, and environmental costs generated by our current food system and offers recommendations to break the cycle by implementing five food finance imperatives that will help implement climate-smart agriculture.

The report, Food Finance Architecture: Financing a Healthy, Equitable and Sustainable Food System, was written in conjunction with the Food and Land Use Coalition, and the International Food Policy Research Institute, and released to coincide with the UN Food Systems Summit.

A feature story and episode of the Table for 10 Billion podcast examine transforming the food system to adapt to climate change.

Digital Agriculture and the Path to the Future

Agriculture continued its march to the digital future in 2021, both with new techniques being developed for growing food and technology that better links the world’s 570 million farmers and 8 billion consumers.

In March, the Bank released the report What’s Cooking: Digital Transformation of the Agrifood System, which explores how digital technologies are improving the food system and provides a roadmap for countries to scale up their own digital agriculture. The report also provides a framework to evaluate policy proposals that can make the food system more efficient, equitable, and environmentally sustainable.

A live event was held in conjunction with the report’s release and the Table for 10 Billion podcast also looked forward to the digital future of food.

In March, the Bank looked at the fast-growing cities of Asia and how they have integrated food systems into their planning. The resulting report, RICH Food, Smart City, demonstrated that more needs to be done at the planning stages to ensure a plentiful and safe supply of food to residents now and in the future.

Only 8% of the 170 emerging Asian cities surveyed by the Bank and FAO were deemed to be “food-smart”–working proactively to ensure strong food systems.

As was made clear by the disruptions caused by the COVID-19 pandemic, it is key for cities to pursue “smarter” food policy in order to foster reliable, inclusive, competitive, and healthy (“RICH”) food systems better aligned with their challenges and aspirations.

The authors of the book sat down to answer questions on what needs to be done and how to do it.