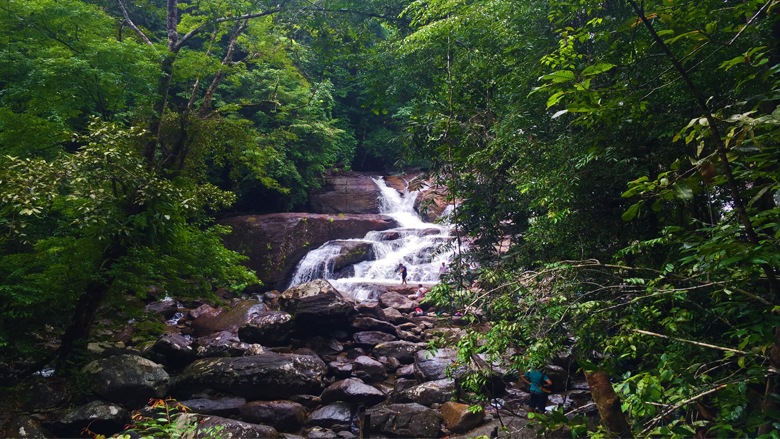 Mohan Heenatigala knows there are invaders in his forest. Stepping onto a trail, the Divisional Forest Officer (DFO) in Galle sees how the flowering Lantana camara is defeating the grass that would have fed foraging animals; another unwelcome species, tall havari nuga (Alstonia macrophylla) trees cast their shade over the path.

“These invasive species are changing the character of the forest, and threatening its biodiversity,” says the DFO, pointing out that they overwhelm endemic species, and impact soil quality among other concerns.

Heenatigala overlooks the Forest Department’s work in the Kanneliya-Dediyagala-Nakiyadeniya (KDN) complex in south-western Sri Lanka. Sprawling over some 10, 867 acres, KDN is a stronghold for the island’s endemic species: over 220 faunal species exist here, of which 41 are endemic to Sri Lanka. Rare plants, trees and shrubs grow here; out of the 301 floral species, 52 percent are endemic. Three major streams emerge from the forest, which is dotted with waterfalls.

In this Eden, Heenatigala is fighting a war on many fronts. It’s not just the invasive species.

In February this year, a forest fire destroyed nearly 10 acres of forest. The rangers fought alongside the villagers to quell it. “We are working with the communities,” says Heenatigala, explaining that that under a new project they are demarcating forest boundaries, combatting illegal encroachments and logging, bolstering nature tourism, and reviving degraded sections of the forest.

The KDN complex falls under the ambitious Ecosystem Conservation and Management Project, or ESCAMP. Supported by the World Bank, ESCAMP will explore how Sri Lanka’s rich natural habitats and resources can be protected, while simultaneously improving the lives and livelihoods of those living in and around protected and ecologically sensitive areas.

Natural forests occupy about 30 percent of the island’s total land area, while rich marine and coastal ecosystems can be found along its 1,620 km coastline. However, deforestation, forest degradation and biodiversity loss are ongoing, with the annual rate of deforestation resulting in a loss of about 7,147 ha/year during the period of 1992 to 2010 alone. About 30 percent of the Dry Zone forests are degraded, while highly fragmented small forest patches dominate in the Wet Zone.

Such habitat degradation has thrown species like elephants in conflict with human beings. With the highest density of elephants in Asia, Sri Lanka sees the deaths of around 70 people and 200 elephants every year; crop and property damage alone amount to approx. US$10 million. As post-war development speeds up, the pressure on wild spaces is mounting.

Sri Lanka has enacted forward thinking environmental policies and supporting legislation to protect its environment. With these in place, ESCAMP will focus on implementation, bolstering the institutional capacity and investment capability of the Department of Wildlife Conservation and the Forest Department.

“Improved landscape management is key to our conservation efforts,” says Anura Sathurusinghe, Conservator General of Forests. “To succeed we need to improve coordination on natural resource management among different stakeholders.”

Back in Kanneliya, Heenatigala and his team have been laying in boundary markers. They have also brought together clergy and elders from surrounding villages to discuss some of the issues facing the forest. Together, they are developing Community Action Plans to stimulate the growth of biodiversity-friendly and climate-smart livelihoods.

Key will be raising awareness among both locals and visitors of just how extraordinary Sri Lanka’s biodiversity really is – the island boasts the richest biodiversity per unit area in the Asian Region, and is a global biodiversity hotspot with a number of species that are found nowhere else in the world.

To protect what remains and perhaps even restore some of the losses it has experienced, Sri Lanka will have to look at innovative new approaches. ESCAMP will also focus on the country’s national parks, where efforts are being made to raise quality of visitor services and the revenue potential of forest and wildlife resources - studies have found that less than 30 percent of foreign tourists visit the country’s national parks in part due to bad management.

“For our efforts to be sustainable, the communities must be invested and engaged not only as part of the project, but integrated more explicitly into all programs for wildlife and forest resource conservation and management,” says Darshani De Silva, Senior Environment Specialist and Project Task Team Leader. “We need to create more competitive and compatible livelihood opportunities for them allowing them to reap the benefits of the natural resources, while empowering them to be part of the custodians.”

For his part, Heenatigala is pleased to report that communities in surrounding villages are responding positively to the program. They work as guides for visitors, help the forest rangers by reporting illegal activities, and contribute their knowledge and traditional techniques for replanting activities. Working together, Heenatigala hopes they can protect the forest.