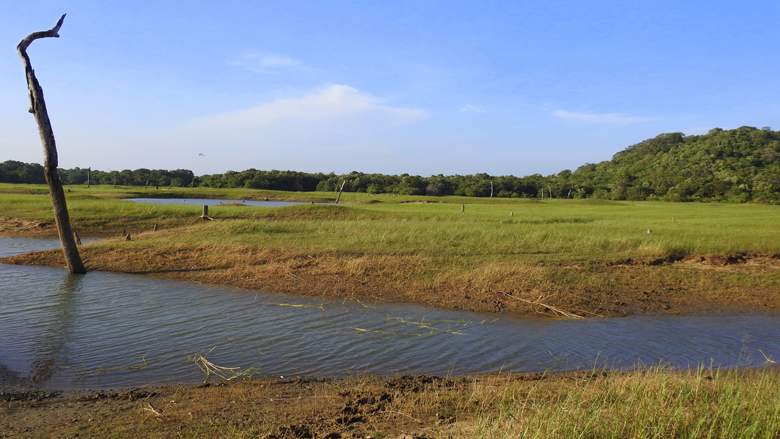 Malaka Rodrigo watched with relief as the flood waters receded from his home in Matara in southern Sri Lanka. “This area doesn’t usually flood,” he said ruefully. Typically, the bunds keep the waters of the nearby Nilwala River in check. But, this time, when the heavy rain pounded the island, the barriers were overwhelmed.

Rodrigo remembers his childhood home being surrounded by a network of canals. Many of these canals have now been filled in to make way for new homes and businesses.

As post-war development in Sri Lanka accelerates, conserving the island nation’s natural resources and preserving its rich biodiversity has become critical for ensuring the well-being of its people and building a strong growing economy.

Today, as we mark World Environment Day, the challenge remains: how can Sri Lanka pull its people out of poverty and carve out a path to development that does not come at the cost of environment?

In Sri Lanka, poverty often underlies the most persistent environmental problems. For instance, people looking for livelihoods are often driven to encroach on forest lands. Today, the Forest Department estimates that Sri Lanka’s forest cover has dwindled to just 29.7% of the country’s total land area, down from over 70% around the turn of the 19th century.

While deforestation and unplanned development can exacerbate flooding, there are other culprits too - notably a growing population, more land being converted to agricultural use, and rapid urbanization.

To help reduce the impact of natural disasters and get the best from new development projects, therefore, a holistic understanding of landscape management, together with mainstreaming environmental planning into the development process becomes important. These can help flag issues before they appear. Along with this, it is equally important to incorporate good policy frameworks, build effective communication channels between various stakeholders, and strictly enforce environmental regulations.

Sri Lanka today is acknowledged within the region for its forward-looking environmental policies. The country has underpinned its policies with an array of legislation and institutions to regulate, protect, and conserve the environment. The real challenge, as always, lies in implementation.

Sri Lanka’s cities are now taking a step forward in the right direction. They are in the process of adapting to new challenges, such as those created by extreme weather events. Under the Metro Colombo Urban Development Project (MCUDP), for instance, nearly 1.6 million people will benefit from flood mitigation measures. The ambitious economic and physical regeneration program helps protect people and businesses in the event of an emergency, while also reducing the costs of providing relief to those affected should a natural calamity occur.

In the flood-ravaged parts of the country, volunteers from the International Movement for Community Development (IMCD) have been at work.

Nimanthie Ariyasinghe, a 28-year-old volunteer, has been spending her days gathering rations and supporting victims. Working closely with Divisional Secretariats, the volunteers have reached deep into affected areas.  Ariyasinghe, who has been up close to many crises, emphasises the need for promoting disaster awareness among communities before a calamity occurs.

“Even before the natural disaster strikes, a lot of decisions have to be taken,” says Darshani de Silva, an Environmental Specialist with the World Bank. This could mean resettling communities living in restricted river reservations, or shifting developments away from the danger zones before the monsoons arrive.

But for such efforts to succeed, people have to work closely with the state. “If our people were educated about when and where to expect floods, and how to respond to natural disasters – where the safe areas are, for instance – it would make a difference,” says Ariyasinghe. “We should start in schools, by telling children about natural disasters.”

“There should be programmes that empower communities to protect themselves,” agrees Rodrigo. “If we made such efforts to educate people a lot of lives could be saved.”

For the volunteers of IMCD, the hard work will continue as the floods subside. People will need help getting back on their feet, and reviving devastated homes and businesses is going to take time and money.

Ariyasinghe admits that the logistical challenges can seem overwhelming. But she says she is proud and hopeful when she sees how readily Sri Lankans have rallied to give their money and time to help victims.

Can a repeat of the recent floods be prevented? Considered development, and well implemented policies and communication strategies, can help buffer communities against loss. “Sri Lanka’s policies and frameworks are among the best in the region,” says de Silva. “The challenge now is ensuring they are implemented.”