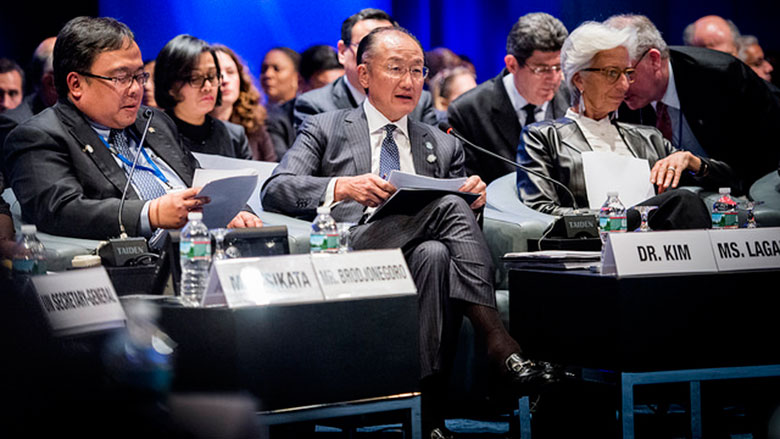 Government ministers from around the world confronted the refugee crisis, a slowing economy, and other global challenges at the 2016 World Bank Group-IMF Spring Meetings.

“Forced Displacement and Development” was the only item on the agenda at the Development Committee meeting on Saturday. The committee, which represents the 189 shareholder countries of the Bank Group and the IMF, urged its members to take action to support vulnerable people who have been forced to flee their homes, and encouraged the institutions to partner with humanitarian organizations to help forcibly displaced people and host communities confront the root causes of the problem.

" We will not reach our end poverty goal unless nations are secure and citizens are not confronted by conflict and violence. "

“We will not reach our end poverty goal unless nations are secure and citizens are not confronted by conflict and violence,” said World Bank Group President Jim Yong Kim. “The tragedy of forced displacement causes a tremendous amount of human suffering, as we have seen on a daily basis with the Syrian refugee crisis.”

The meeting followed pledges on Friday by eight countries and the European Commission, who contributed to a package of more than $1 billion in support of Syrian refugees and host communities in Jordan and Lebanon, as well as reconstruction in the Middle East and North Africa.

Earlier Friday, Jordan’s Queen Rania and other high-ranking officials called for a new approach to forced displacement and a refugee crisis that has spread from the Middle East into Europe over the last year.

“We must respond to this monumental crisis with monumental solidarity,” said United Nations Secretary-General Ban Ki-moon, adding that the issue will be addressed at next month’s World Humanitarian Summit.

Countries are facing the refugee crisis and other global challenges such as climate change in an environment of slowing global growth. The Development Committee asked the Bank Group and IMF to provide developing countries with policy advice and financial support amid weak demand, tighter financial markets, softening trade, persistently low oil and commodity prices, and volatile capital flows.

Demand for lending from the Bank Group is at its highest for a non-crisis period and is on track to climb to more than $150 billion over four years.

“We’re now working urgently and in new ways with partners to find solutions to these issues that affect all of us,” Kim said, addressing the media at the beginning of the Meetings.

One of those issues is climate change. The committee welcomed the Bank Group’s Climate Change Action Plan to help developing countries add 30 gigawatts of renewable energy — enough to power 150 million homes — to the world’s energy capacity, bring early warning systems to 100 million people, and develop climate-smart agriculture investment plans for at least 40 countries — all by 2020.

The committee urged the Bank Group to work with the World Health Organization and others to help developing countries strengthen their health systems, including pandemic prevention and preparedness. It also urged the Bank Group to finish preparing its Pandemic Emergency Facility “as soon as possible and foster a new market for pandemic risk management insurance.”

On Thursday, Kim and UNICEF Executive Director Anthony Lake urged global and national leaders to step up and accelerate action and investment in nutrition and early childhood development programs as a critical foundation for equitable development and economic growth. The Bank and WHO also hosted a livestreamed event on the need to make mental health a global development priority.

The committee urged the Bank Group and IMF to step up efforts to find financing for the ambitious Sustainable Development Goals, approved in September, which are expected to require far more resources than official development aid can supply. It said the multilateral development banks should partner to “support developing countries’ efforts to meet the SDGs, while adjusting to a slower growth environment and reduced private capital flows.”

The committee said gender equality is central to the SDGs and welcomed the Bank Group’s renewed gender strategy.

A special event with U.S. First Lady Michelle Obama on Wednesday highlighted the issue in the context of equal access to education for girls. Obama urged leaders to put girls’ education at the “very top” of their agenda. Kim announced the Bank Group would invest $2.5 billion in education projects benefiting adolescent girls over the next five years.

The committee said the International Development Association, the World Bank’s fund for the poorest countries, remains an important source of financing for these countries and asked donors to show strong support for IDA’s replenishment this year.