WASHINGTON, April 11, 2016—As developing countries continue to face strong economic headwinds, demand for lending from the World Bank has risen to levels never seen outside a financial crisis, and is on track to climb to more than $150 billion in support between FY13 and the current fiscal year.

“We are in a global economy where growth is expected to remain weak, so it is critically important that the World Bank play our traditional role of helping developing countries accelerate growth,” said World Bank Group President Jim Yong Kim. “We have an historic opportunity to end extreme poverty in the world by 2030 but the only way we can achieve this goal is if developing countries – from middle-income to low-income nations – get back on the path of faster growth that helps the poorest and most vulnerable.”

Global economic growth is projected at 2.9 percent in 2016, picking up at a slower pace than previously expected from an estimated 2.4 percent in 2015. However, conditions have generally deteriorated further since the start of the year.

In the face of these challenges, demand from middle-income countries for IBRD lending in our last fiscal year, FY15, was the highest it has ever been outside a financial crisis at $23.5 billion. The Bank expects that FY16 will easily eclipse that record, with lending projected to rise above $25 billion. 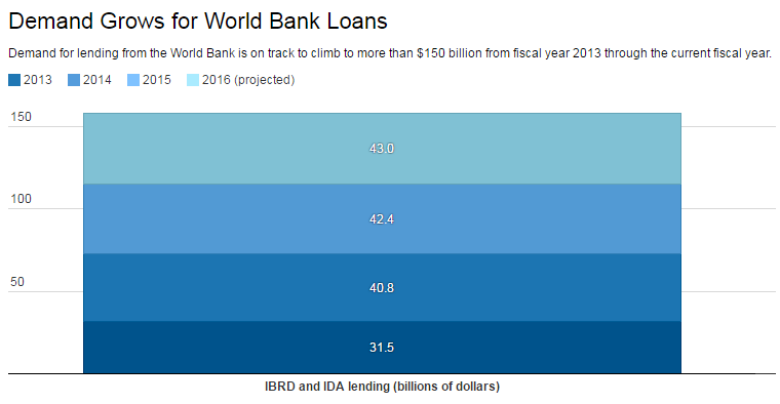 A decade ago, in FY06, IBRD lending was at $14 billion; demand from middle-income countries rose to $44 billion in FY10, the peak lending year of the financial crisis. When management reviewed IBRD’s financial capacity in FY10, during the crisis, it was predicted that by FY13, post-crisis lending would drop to pre-crisis levels of $15 billion, which was the average level in real terms for the decade prior to the crisis. IBRD lending hit roughly $15 billion in FY13, but the Bank expects to see demand rise at least $10 billion higher than that in our current fiscal year, FY16, to more than $25 billion. Further, thanks to a record replenishment during the last round of fundraising for the poorest countries, support from IDA, the World Bank Group’s fund for the poorest, this year is also expected to be near historic levels. And demand for non-lending advisory services, to help clients implement important policy changes, is also higher than ever.

An important portion of current lending support has been in the form of Development Policy Financing (DPF), which has backed important reforms client countries have been implementing to help diversify sources of growth and buffer against future shocks. Reforms countries are seeking to implement vary according to the client’s needs and the challenges they are facing.

“Developing country governments are feeling the pressure to find additional ways to accelerate growth, in the current downturn,” said Jan Walliser, Vice President for Equitable Growth, Finance, and Institutions. “Improving long-term growth trends now calls for a broad set of legal, regulatory, institutional, and even logistical reforms that make investing more attractive. Focusing now on structural reform is the recommendation of both mainstream economists and of G20 governments.”

The World Bank Group has longstanding experience in advising on and supporting implementation of country-driven reforms. The Bank offers a unique mix of deep country knowledge, sectoral expertise, and distilled global experience.

“The use of these types of loans are important because the Bank is basically signaling to the financial markets that a country’s reforms are technically solid, the country will follow through on these commitments, and the reforms will help and not hurt the poor and vulnerable," Kim said. “This is highly complementary to the IMF’s stabilization efforts.”

The World Bank helps support countries’ reforms because they often help accelerate growth, and economic growth has accounted for roughly two-thirds of global poverty reduction in the last half-century. The demand for the World Bank Group’s advice and financing to support those reforms have followed cyclical patterns. Today, with weak growth, the World Bank Group is observing a sharp increase in the demand for DPFs and associated reforms throughout our continuum of clients—from upper middle-income to low-income countries including both commodity exporters and commodity importers.

“The World Bank Group is a cooperative of countries and our role is to work with our clients so that they can achieve their highest aspirations, Kim said. “But it is now exceedingly clear that we will never end extreme poverty and boost shared prosperity if we don’t tackle global threats like pandemics, climate change and forced displacement in partnership with our member countries -- one region, one country and one person at a time.”