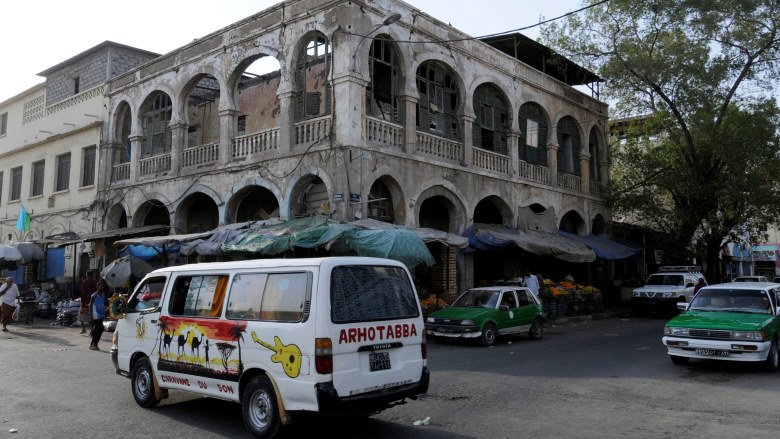 Half-way through its 2014–17 strategy for Djibouti, the World Bank Group (WBG) took stock of its impact. The overall goal of the strategy has been to support the government in reducing extreme poverty and building the foundations for shared prosperity through improved service delivery and better governance.  The ‘Performance and Learning Review’ was organized to assess progress toward this goal, ensure that any lessons learned so far are integrated into the program, and to determine whether the strategy needed to be adapted to changes at either the country or regional levels.

The half-day event at the end of November 2015 involved an extensive series of consultations with a broad range of government officials, along with members of the private sector and civil society. The President of the National Assembly attended as a guest speaker. From the government side, the consultations were co-chaired by the Minister of Economy and Finance in Charge of Industry and the Minister of Foreign Affairs and International Cooperation. The World Bank Resident Representative and the representative of the Bank’s private sector, the International Finance Corporation co-chaired for the WBG. They were joined by a host of Bank experts involved in implementing the various aspects of the strategy. The World Bank Country Director for Djibouti, Egypt, and Yemen and the Chief Economist for the region also participated via videoconference from Cairo.

One major development discussed at the event was the launch of the Bank’s new regional strategy for the Middle East and North Africa region. In a presentation, Chief Economist Shanta Devarajan explained that the Bank was responding to current instability by reorienting its interventions to focus directly on the causes of conflict, as a means of promoting the peace and stability that are the essential conditions for development. Like some other countries in the region, Djibouti has avoided conflict but suffers from its consequences. Refugees fleeing fighting in Somalia, between Ethiopia and Eritrea, and most recently in Yemen, have sought safety in Djibouti; putting an extra demand on scarce government resources. This external pressure combined with the country’s weak institutional capacity and lack of human development could be a potential formula for instability. There was agreement that the new regional strategy was relevant for Djibouti, and that to boost the country’s resilience it was essential to strengthen institutions, focus on human development and create the conditions for inclusive growth.

One of the principal pillars of the new strategy is rebuilding the social contract, the relationship between citizens and their government that is one of the bedrocks of stability.  This relationship requires mutual trust, which is based, among other things, on the confidence among citizens that the government is able to provide basic services. As part of the consultations, the state of this dynamic in Djibouti was discussed through the lens of a recent World Bank report, Trust, Voice, and Incentives: Learning from Local Success Stories in Service Delivery in the Middle East and North Africa.

The study explores the state of the social contract across the region where, it says, the challenge is moving from the provision of public services to improving their quality.

Rather than looking at averages or at poor performers, the study examines why, despite uniform policies and budgets, the quality of services varies so greatly from one sector to another, as well as from one region to another within the same country. It finds examples of positive experiences and best practice, and concludes that when it comes to the public education sector, for example, material inputs—such as school buildings, teachers and textbooks—of and by themselves don’t guarantee good results.

A paucity of data on Djibouti means it is largely under-represented in the study, but what data there is prove the point.

These findings spurred discussions during the consultations about investing in human capital, with better training for local teachers to improve the standard of public education. The same could be said for improving Djibouti’s public health services, where better training is needed for medical staff.

These findings could be relevant for Djibouti, a small country with less than 900,000 citizens, high (48%) unemployment and a poverty rate of 23%. Along with investing in human capital, there was consensus that the governance of institutions had to be strengthened, and the knowledge of local communities drawn on to improve service delivery, and citizens given a way to hold institutions accountable.

The Bank has focused on reducing extreme poverty in Djibouti, and on improving its business environment for investment. Most of its funding for Djibouti is from the International Development Association (IDA), the arm of the Bank that gives the world’s poorest countries grants and interest-free loans, which earmarked up to $31 million for programs under the current country strategy. The International Finance Corporation has worked with the Bank to make it easier for outside investors to set up businesses in the country through establishing “one stop shops” to take care of all necessary procedures. In June 2014, the Bank convened a high-level forum on South-South exchange with territories of a similar size to it—Cabo Verde, Dubai and Mauritius – to share knowledge on successful growth strategies.

As of November 2015, the active Band Group portfolio for Djibouti comprised seven IDA projects, the Bank’s fund for the poorest countries, with a total commitment of US$45 million (in grants and credits) complemented by a Trust Fund (TF)  portfolio of about US$24 million (in grants). The portfolio, both IDA and TF, focuses on social safety nets, energy, rural community development, urban poverty reduction, health, education, disaster risk management, and governance and private sector development, with an important consideration to cross-cutting themes such as gender and youth.

“We already have a very diverse portfolio of interventions in a number of sectors,” concluded the Bank’s Resident Representative, Homa-Zahra Fotouhi. “In thinking about the allocation of resources for the next two years, we recommend building on the good results that we have achieved together with the government, and focusing on activities that help create jobs and reduce poverty.”

The Bank has supported the government in making a real impact for the poor and vulnerable segment of the population on some services, like water and electricity. The urban electricity project in Balballa has so far brought street lamps, transformers, and 4,000 household power lines to almost 27,000 residents in the impoverished suburb of Djibouti’s capital.

In Quartier 7, another poor area, a health center, community center, sports fields and childcare center were all started, drains were upgraded and a water purification vehicle supplied. And an innovative project has given low-income earners the opportunity to sign-up for paid community service in exchange for hands-on advice on good nutrition in pregnancy and in early childhood—more than 10,000 women have taken part.

Outside the capital, resources have been spent on rural community development, providing more than 1,600 rural households with 10,000 heads of livestock much-needed water tanks and protected drinking holes, and building landing sites for local fishermen and equipment for women selling their fish.