For more than twenty years, the World Bank Group has been a steadfast partner of the Former Yugoslav Republic (FYR) of Macedonia in its transition from a socialist to a market-oriented economy, and in its long-term aspiration to join the European Union (EU). FYR Macedonia has made large economic and social strides since its independence in 1991, carrying out substantial reforms to privatize and open its economy, enhance its investment climate, and modernize its public sector.

The country has a solid track record of prudent macroeconomic management, which allowed it to maintain positive growth and increase employment throughout the global financial crisis. As a result, unemployment fell from 38% in 2002 to 28% in 2013, while per-capita income rose from just 25% of the EU average in 2002 to 35% in 2013.

Although unemployment has declined significantly, more needs to be done to ensure that more and better jobs are available, and that all segments of Macedonia society can participate in employment and economic opportunities. While real growth has averaged 3.2% per annum over the past ten years--an impressive achievement on the European continent--this figure falls short of the 4.5% or more needed for FYR Macedonia to converge to living standards of the new EU member states in the next 20 years.

" Accelerating growth is a priority, but so is ensuring that growth is more inclusive. " 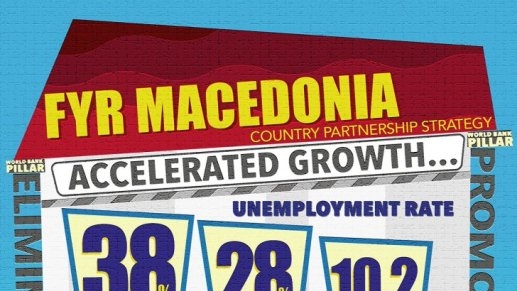 “Accelerating growth is a priority, but so is ensuring that growth is more inclusive,” says Ellen Goldstein, World Bank Country Director for Southeastern Europe.

“Available data indicates that growth has not yet translated into significant decreases in poverty or improvement in the well-being of the bottom 40% of the income distribution. Stronger efforts are needed to break down the barriers to economic participation among disadvantaged groups, including women and minorities,” continued Goldstein.

Measuring progress on poverty and shared prosperity in FYR Macedonia is complicated by sensitivities associated with the availability and quality of household data. Out-migration is very high, and conducting a new census has proven challenging since 2002. Response rates on the Household Budget Survey, which is the main source of poverty information, have been declining over time. The Bank is working with Government to try to overcome these statistical constraints.

The new World Bank Group Country Partnership Strategy (CPS) for FYR Macedonia was endorsed by the Board of Executive Directors on October 16. The objective of the strategy is to accelerate growth while making it more inclusive so that all segments of society can benefit from job creation and increased income. A cross-cutting theme is to support the longer-term EU accession agenda, including leveraging Bank resources to enhance absorption of EU assistance.  The new CPS supports Government’s economic program for the period 2014-2018.

“This CPS demonstrates the willingness of the Government of the Republic of Macedonia to continue down the path of growth and reform that has helped boost livelihoods, and lower unemployment over the last 8 years,” noted Zoran Stavreski, Deputy Prime Minister and Minister of Finance.

“We have a clear vision of development, based on economic growth through competitiveness, which is to be achieved through further improvements in business climate, infrastructure and human capital.  A simultaneous focus on skills and inclusion also showcases an equally important commitment to the inclusion agenda – recognizing that the fruits of growth can be shared more broadly if all Macedonians have access to better jobs, skills, and improved public services.”

The first pillar focus of the CPS on growth and competiveness is complemented by a second pillar that looks at ways to improve the peoples’ skills and employability and increase inclusion.

“Improving competitiveness takes time and effort, and requires investment in skills and innovation. As local companies become more sophisticated and skill levels rise, they will be increasingly able to join global production chains, taking full advantage of the opportunities that foreign direct investment brings to FYR Macedonia. This will create more and better jobs for citizens from all segments of society.”

Jobs are central to the country’s inclusion agenda, but another important part of the story is better quality and efficiency of social protection systems and basic services. Through interventions such as the on-going Conditional Cash Transfer Project and Municipal Services Improvement Project, the Bank can help reduce the gaps faced by some portions of Macedonian society - removing barriers to participation for disadvantaged groups.

More generally, the Bank will work to strengthen fiscal transparency and the efficiency and selectivity of public spending -including focusing on investments priorities that have the highest economic and social benefits. The Bank is working closely with Government to complete a Public Finance Review to identify opportunities to further strengthen the formulation, execution, and control of the budget as an integral part of the EU’s economic governance agenda for FYR Macedonia.

The World Bank Group and FYR Macedonia: 20 Years of Partnership