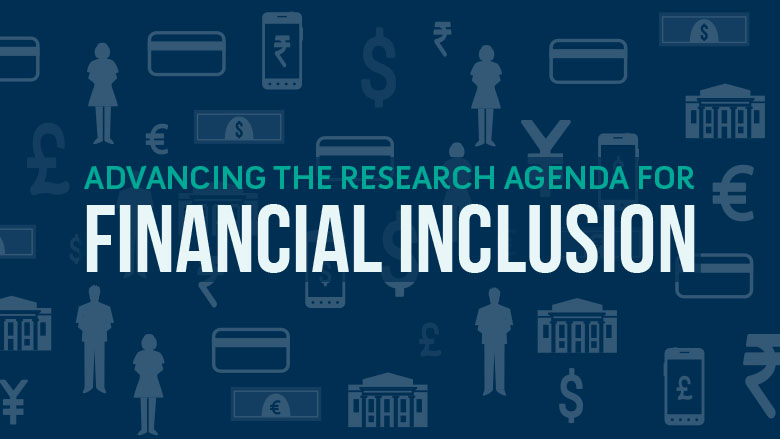 World Bank - CEGA Workshop: Advancing the Research Agenda for Financial Inclusion
June 28, 2016Washington, D.C.
Two billion individuals around the world remain “unbanked,” without access to financial services, and in emerging markets, bank accounts and electronic payment systems are often under-utilized among small- and medium-sized enterprises (SMEs). A growing body of evidence suggests that improving access to secure money transfer services, credit, and savings among poor households and merchants can lead to increased investments in durable assets and income-generating activities. Yet understanding the precise determinants and impacts of financial inclusion is complex, especially in low-income settings.

Highlights from the panels:

In the opening panel titled “Where We Are, Why It Matters”, Rebecca Mann (Bill & Melinda Gates Foundation) made a strong case for the role of governments to expand financial inclusion: markets and commercial attempts alone are not sufficient to reach the poor, which requires changing the underlying economics of transacting with low-income people. Government to people payments, in particular, may be a valuable tool to reach out to the underserved. Kay McGowan (USAID) emphasized the notion that financial inclusion should be a “mean to an end” and shedding light on its impacts in terms of smoothing income, enabling access to services and providing a path to asset-building and productive investments is key.

The panel “Mobile & Global: Making Payment Systems Work Better” discussed the impacts of “Mobile Money.” In Kenya, Billy Jack (Georgetown University) found that person-to-person (P2P) payment networks increase consumption and smooth the impact of health-related shocks. Tarek Ghani (Washington University) discussed how government to people (G2P) mobile payments have been linked to greater usage and expansion of mobile money networks, and to increased savings in Afghanistan. Relatively small design changes can make a major difference in how people relate to the financial system, noted Simone Schaner (Dartmouth College), who pointed out that inclusion programs in particular have strengthened women’s economic agency in India. A key action item, according to Schaner, is the need for financial education, on the basics of how to use an account, especially among poor rural women.

The panel “Promoting Savings Among the Poor” highlighted that electronic government payments, trust, social networks, and types of banking agents can shape savings behaviors. Paul Gertler (UC Berkeley) documented that the introduction of electronic government payments in Mexico led to an increase in personal savings linked to improved trust in financial institutions—which tends to be especially low among the poor and may explain why they tend not to save formally. Summarizing research in Indian villages, Arun Chandrasekhar (Stanford University) explored the importance of social reputation in overcoming behavioral frictions and encouraging savings. In particular, monitoring can spur people to save more, especially when performed by actors central to one’s social network. Xavier Gine (World Bank) presented new evidence from Senegal on saving and account activity, comparing people who open an account with a banking agent to those who open an account at a traditional bank. Banking through agents increases the number of deposits and withdrawals. Douglas Pearce (World Bank) noted that, overall, people save more than one might expect, but they save in formal financial institutions somewhat less than we expect.

A discussion of “Ensuring Access, Insuring Stability” argued for stronger social protections for those who are now excluded. Craig McIntosh (UC San Diego) discussed the risks faced in the agricultural sector and outlined how to use protective tools to ease shocks to family farms, which, he noted, are the most numerous small and medium-sized enterprises (SMEs) in the developing world. Technology, such as satellite images and drones, can help give consumers the kinds of products they truly need, instead of the higher-priced, higher-profit-margin products that companies want to sell them. Shawn Cole (Harvard Business School) reported on the results of a study of the market for life insurance in India, where there are 105 million insurance customers; 20% of total household savings. His findings make a strong case for consumer protection: 60-80% of agents recommend unsuitable products that provide high commissions to the agents. Disclosure standards, market competition, and educated customers improve agents’ behavior.

The panel “Helping the Poor Gain Access to Credit” highlighted how access to credit per se is not sufficient to move the needle on key economic outcomes. Aprajit Mahajan (UC Berkeley) documented that expanding access to credit via store credit cards to new borrowers led to large sustained defaults and high delinquency rates in Mexico. Cynthia Kinnan (Northwestern University) stressed the importance of heterogeneity in the types of entrepreneurs accessing credit and discussed its implications for lenders in their decision to allocate credit and for policymakers when designing programs to promote credit and their cost-benefit calculations. Against this backdrop, developing ways to mitigate bad financial decisions are essential. Bilal Zia (World Bank) spoke of one potential channel to affect these decisions: financial education. In particular, he presented evidence that entertainment media (soap operas) can be used to deliver information, improve financial literacy, and ultimately reduce burdensome debt in South Africa.

6.       Delivering Financial Services to the Poor

The last panel of the day discussed key issues for “Delivering Financial Services to the Poor.” Digitization and other technologies can help bring services to excluded segments of the population, and improve transparency and create greater trust in the financial system. Traditional credit scoring methods may represent barriers and often do not work for the poor in emerging markets, who lack ways of establishing their creditworthiness, argued Shivani Siroya (InVenture). Big data from mobile, transactions, social network information and from mobile credit tools make it possible to build financial identities for those outside the financial system who otherwise would have none. In a rapidly changing payments landscape, noted Mark Pickens (VISA), providers must work with governments, non-banks, and mobile-money pioneers to achieve greater impact and that the private sector should avoid splintering consumers among many platforms. The importance of interoperability was similarly highlighted by Jose Sanin (GSMA), who also stressed that to build trust among stakeholders, the industry will need to establish and follow a “code of conduct” that promotes best practices and protects consumers, especially the most vulnerable ones. Carlos Cornejos (MasterCard) noted that the next generation concern for the inclusion agenda is not limited to account ownership but that account usage is needed to ensure the growth of a broader payments ecosystem that carries benefits beyond the inclusion goals.

This 1.5 day workshop, hosted by the Office of the Chief Economist for the World Bank's Equitable Growth, Finance & Institutions Practice Group and the University of California at Berkeley’s Center for Effective Global Action (CEGA), brought together researchers and public and private sector practitioners to assess what we already know, identify critical gaps in knowledge, and seek out shared research priorities for the future.

The event served as a forum for World Bank staff and researchers from CEGA to assess what we already know about the drivers and impacts of financial inclusion, while identifying critical gaps in knowledge and shared research priorities moving forward.

During each panel, external and World Bank researchers presented relevant work and highlighted outstanding research questions. Bank operations staff shared current (and planned) projects in each area, noting areas of overlap and pointing out remaining gaps in knowledge. A second, half-day session for select CEGA and Bank leadership provided an opportunity to design a shared research agenda, identify promising opportunities for collaboration, and agreed upon immediate next steps.

The Center for Effective Global Action (CEGA) is a network of nearly 70 academic researchers headquartered at UC Berkeley, which combines expertise in data science with rigorous impact evaluation to address financial exclusion and other challenges associated with global poverty. CEGA brings a diverse network of public and private sector partners—including Visa, BRAC Bank (Bangladesh), Roshan (Afghanistan), the State Bank of India, Premise Data, and Segovia/Give Directly—to future collaborations with the Bank. In addition to expertise in randomized and quasi-experimental field trials, CEGA is gaining experience in the data analytics space, leveraging machine learning and other tools from computer science to better understand poverty, financial behavior, and credit risk among low-income households and firms.

The World Bank Group has extensive initiatives designed to address financial inclusion, including those organized by the Finance & Markets Global Practice, the IFC’s Financial Institutions Group, Consultative Group to Assist the Poor (CGAP),Development Impact Evaluation (DIME), Strategic Impact Evaluation Fund (SIEF), and Regional work. The workshop will help to identify and synchronize shared efforts, while increasing the efficiency of common resources. During the workshop, Bank operations staff will discuss the relevance of emerging insights from academic researchers, as well as priorities 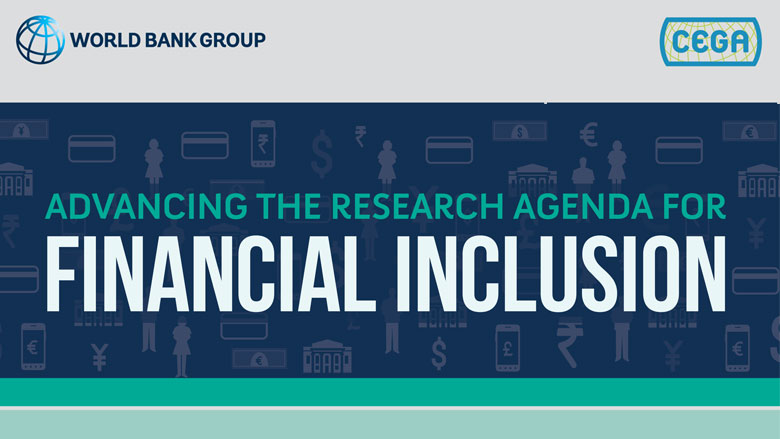