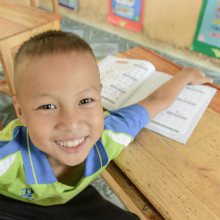 The World Bank In Thailand

Thailand is one of the great development success stories. Due to smart economic policies it has become an upper middle income economy and is making progress towards meeting the Sustainable Development Goals.

Thailand: Commitments by Fiscal Year (in millions of dollars)*

Error occured while processing. Please check after some time.

Find out what the Bank Group's branches are doing in Thailand.