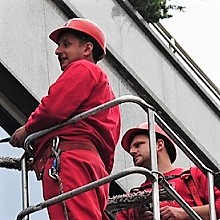 The World Bank in North Macedonia

The Republic of North Macedonia is an upper middle-income country that has made great strides in reforming its economy over the last decade. More efforts are still needed to generate economic growth and improve living standards for all.

kilometers of local roads in Macedonia have been rehabilitated, as well as about 280 km of regional roads, under a World Bank financed project

Find out what the World Bank Group is doing in Europe and Central Asia.