North Macedonia: Sowing the Seeds of a Sustainable Future 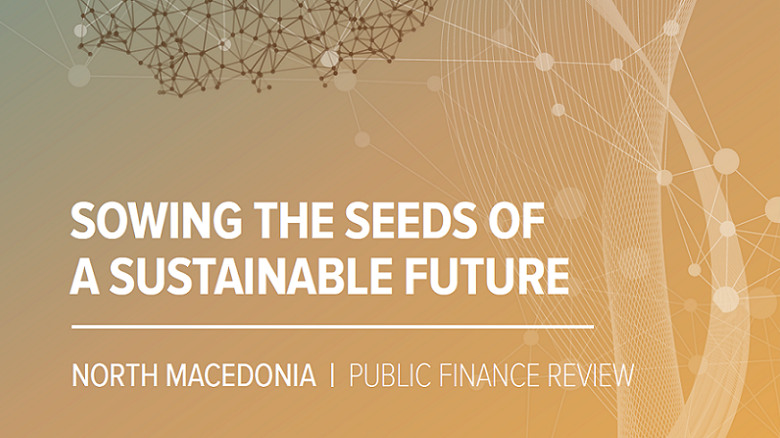 This Public Finance Review was carried out to assist the Government of the Republic of North Macedonia in finding ways to make its public finances more sustainable while also improving critical public services.

The Need for Fiscal Reforms

Government spending is comparable to that of peer countries, but there is scope for raising efficiency. While from a global perspective public debt is moderate, the pace at which it has been building for the past decade could raise questions about sustainability.

The State of Public Financial Management

The Government of North Macedonia has adopted an ambitious and comprehensive PFM Reform Program which could address many of the PFM weaknesses identified in recent diagnostic reports. This program addresses seven core pillars of a well-functioning PFM system and sets out a plan of action and a generalized schedule of deliverables.

While the schedule allocates a relatively short timeframe for achieving some key reforms and there are questions about the capacity of some institutions to deliver, the government appears to be committed to the program objectives and plans to launch it through a series of action plans.

Although North Macedonia has made progress in many aspects of intergovernmental finance, its 81 local governments still find it difficult to ensure adequate and efficient coverage of social services. Municipal revenues fall short, and local governments fail to fully use the little revenue autonomy they have.

Balanced actions are needed across several dimensions, such as building local government capacity to absorb and use funds and cooperation for virtual consolidation of municipalities. Municipal debt remains a problem, not because of excess borrowing—in fact borrowing has been limited—but because of a lack of discipline with regard to budget arrears, some of which have been carried over since decentralization began.

North Macedonia’s strategic decision to use a low-tax environment and other tax incentives to attract FDI has borne fruit, but its fiscal cost has been sizable. Government revenues as a share of GDP have declined and are now much lower than those of its neighbors and other European countries. Contributing to the lower tax revenues resulting from the low-tax incentives is the country’s low revenue efficiency.

The tax system could become more sustainable through: adoption of a more progressive PIT structure with higher marginal rates for high-income earners; broadening the PIT base by removing exemptions for specific capital income and gains; broadening the value-added tax base by removing the preferential treatment of selected goods and services; raising the excise taxes on tobacco, coal, and diesel fuel; and using cost-benefit analysis to explore whether the government’s investment incentive strategies have indeed been beneficial.

Ensuring the Sustainability of the Pension System

Pension reforms are needed to contain the fiscal pressures in North Macedonia caused by population aging. By international standards, North Macedonia spends a comparatively large share of GDP on pensions, which is especially a problem because its population is still relatively young.

In the next two decades, North Macedonia’s rapidly aging population will put additional pressure on the pension system’s sustainability. Without reforms, it will continue to generate a sizable deficit. Over the past decade the government has had several successful rounds of pension reforms, but more work is still needed.

Improving Social Assistance to Meet the Needs of the Most Vulnerable

North Macedonia’s social assistance spending is not only relatively low, but it is also fragmented, although social protection spending (with social insurance, including pensions) is quite large. Social assistance is deficient in several areas.

Cost-effectiveness is also a challenge, particularly for programs like the parental allowance, for which hikes in spending have not had the intended impacts on population growth. Social financial assistance benefits are barely adequate, but there are few financial incentives for social assistance beneficiaries to seek employment.

Making the Grade on Education

North Macedonia’s highly decentralized education system—with its poor accountability, few quality assurance mechanisms, and low and inefficient spending—undermines the equity of access to education and the quality of learning outcomes.

Effective reform options might be to explore the feasibility of school optimization, revisit how schools are funded by introducing per-student formulas in preschool and higher education, and change the regressive preschool financing mechanism. Options to enhance quality of education might be to open up more access to preschool education, introduce a learning assessment system, and improve recruitment and teaching conditions for teachers.

In recent decades, North Macedonia has undertaken ambitious reforms in the health sector, including cost-control measures that helped curb spending on health. However, while the country fares well with regard to maternal mortality, its health outcomes are not as good for child health, noncommunicable diseases (NCDs), and financial risk protection.

To catch up with peers in all health outcomes will require that North Macedonia give health a higher priority in public spending and allocate public resources for health more efficiently. The most promising efficiency gains are concentrated in the areas of payments to providers of primary health care, the planning of specialist services, and pharmaceuticals.

To unlock its full potential, agriculture needs to significantly improve its performance. Farm productivity is low, with decreasing returns to scale and limited use of technology and too many workers, many caught in a low- productivity trap. Current agricultural support measures fail to address the problem.

While government support for agriculture is far more generous in North Macedonia than in regional peers, much of it targets low-value products, so that productive resources are misallocated. A rebalancing, from market support and direct payments to rural development more generally, can lead to more efficient farming and better use of public resources to heighten productivity and sector competitiveness by modernizing farms and giving priority to high-value production.