FYR Macedonia has been able to preserve macroeconomic stability in the presence of adverse shocks. Macroeconomic policies have been geared towards keeping price stability and manageable external balance, with the domenstic currency pegged to the Euro. FYR Macedonia’s government size compares favorably to most countries at its level of per-capita income. The Government has implemented structural reforms to improve the business climate, elevating FYR Macedonia to one of the top reformers in the World Bank’s 2015 Doing Business rankings, and fostering grow in FDI by an average of 4.2 percent of GDP per year between 2006 and 2014. 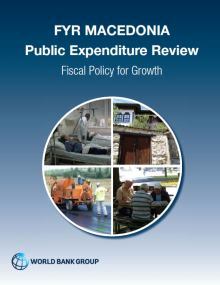 Public Finance Review
Faced with a double dip-recession since the 2008 crisis, the Government engaged in expansionary fiscal policy, which helped sustain growth and employment, but resulted in increased public debt from low to moderate levels. FYR Macedonia’s public debt stood at 45.7 percent of GDP in 2002, as the country emerged from the 2001 conflict. Solid growth, a sound fiscal policy stance and pre-payments to the Paris Club enabled the country to reduce its public debt to 23.0 percent of GDP by 2008 – the lowest level during the decade. Since then, public debt has increased gradually to 46 percent in 2014, still below the SEE6 average of 52.6 percent in 2014.

The fiscal expansion of recent years has brought several weaknesses to the fore. We highlight three main ones:

The report suggests that the FYR Macedonian authorities make sustained efforts to strengthen public financial management, improve the efficiency of public spending and moderate ambitious plans to scale up infrastructure investments, with a greater focus on the quality of investment spending. With a relatively low level of revenues and sticky expenditure composition – 90 percent of total expenditures are for current outlays and more than 25 percent of current spending is pension-related - support to growth is unlikely to come from further tax cuts or large spending increases, as these would further increase government debt. Maintaining a manageable debt level is particularly important in the current uncertain external policy environment.