Managing Fragility Risks and Forced Displacement in Middle-Income Countries: A Focus on Prevention to Build Resilience and Stability 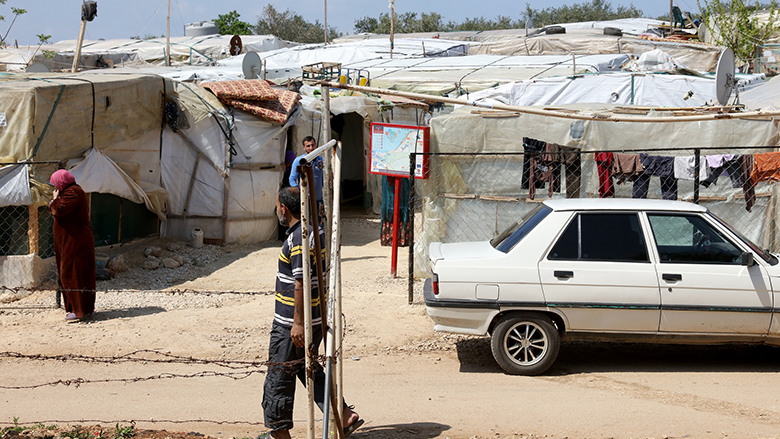 Fragility, conflict, and violence (FCV) has emerged as a critical development challenge for middle-income countries (MICs). This challenges long-held assumptions that fragility is primarily confined to low-income countries (LICs), and that the relative strength of MIC institutions would foster social and economic progress and shield them from the ravages of FCV. Beyond general challenges of fragility, the spike in conflicts in neighboring countries has also disproportionately impacted MICs, which host a significant portion of the world’s refugees. Development policies and programs geared towards supporting stability can help manage growing fragility risks, create an enabling environment for private sector investment, and help MICs address poverty to realize their full development potential.

In 2016, more countries experienced violent conflict than at any time in nearly 30 years, and terrorist attacks and fatalities have risen sharply over the past ten years. This has led to historically high levels of forced displacement, with climate change, demographic shifts, new technologies, and other global trends inter-connecting in complex ways to cause further instability. The impact on MICs is particularly severe. In 2016, the number of active conflicts in MICs was more than 2.6 times the number in LICs, while MICs supported by IBRD hosted 44 percent of the world’s refugees, more than the 31 percent hosted in LICs supported by IDA. MICs also face the highest levels of intentional homicides on a global scale. For MICs, the FCV challenge has emerged as a critical impediment to development progress, challenging long-standing assumptions that with relatively strong institutions, income growth would lead to peace accompanied by steady social, economic, and political advancement. For recent graduates – LICs that succeeded in moving up the development ladder – fragility threatens to slow – or even reverse – recent gains in poverty reduction. If current trends persist, by 2030, more than half of the world’s poor will live in countries affected by high levels of violence.

What the World Bank is Doing

In light of these challenges, the WBG is scaling up its work to address FCV and forced displacement in MICs and LICs to help build a more stable and resilient world. At the heart of the Bank’s FCV engagement is a recognition that the benefits of stability are global in nature. Conflict, violence, and extremism do not respect national borders, meaning their proliferation and spillover effects place all countries at risk. Efforts to address the grievances and exclusion that perpetuate instability offer a bulwark against these risks and serve as a global public good from which all members of the international community benefit. By confronting fragility at its source, the WBG not only promotes development gains in FCV-affected countries, but also contributes to stability, security, open commerce, and growth in countries across the globe.

For the Bank, the scope and trajectory of the fragility challenge demands doing business differently to enhance impact in FCV settings. Under a strategic framework that focuses on addressing fragility risks to prevent violent conflict and better manage crises, the WBG is taking early action, leveraging partnerships to remain engaged during active conflict, and supporting countries throughout post-conflict transition and recovery. In the realm of forced displacement, the WBG is providing development support to improve service delivery and enhance economic opportunities in host communities faced with a sudden influx of displaced people, and making financing available on concessional terms to help MICs that provide a global public good by opening their borders to refugees. Encouraging greater private sector engagement in FCV-affected countries has also emerged as a priority.

What links these engagements is a recognition that the old way of doing business is insufficient to tackle the global fragility challenge, and that new ways of working are needed to provide the stability that underpins shared prosperity across the globe. Innovative financing, analytical expertise, and more strategic knowledge management underpin the Bank’s new FCV approach.

IBRD capital is at the heart of the Bank’s ability to address fragility risks. Over the last three years, around 40 percent of IBRD lending has gone to countries affected by aspects of fragility, conflict, and violence. However, given the significant needs of IBRD countries for financing for more traditional development efforts – such as for infrastructure, health, education, and energy – the ability of the WBG to support programming that explicitly addresses FCV and crisis risk management is limited. This is particularly problematic in the case of prevention: The goal of efforts to prevent violence, crises, and extremism is to ensure something does not occur, which makes it hard for policymakers to demonstrate and take credit for the success of prevention-oriented programming. Governments therefore often lack an incentive to borrow for such activities, particularly in the context of other pressing, more “visible” development needs. Greater capital could ease this constraint by allowing IBRD clients to borrow for traditional development projects as well as preventive efforts needed to avoid crisis and maintain stability.

The Global Concessional Financing Facility (GCFF) was launched in April 2016 by the World Bank in partnership with the UN and Islamic Development Bank. To date, the GCFF has unlocked some $1.5 billion in concessional financing – about $4 for every dollar in donor grants – to support refugees and host communities in Lebanon and Jordan. The Facility has also expanded to the global level, enabling it to provide rapid support to MICs facing refugee crises wherever they occur. In addition to its role as a founding partner, the World Bank serves as Trustee for the GCFF, as well as an implementation support agency for a number of projects funded by the Facility.

The State and Peacebuilding Fund finances innovative approaches to peacebuilding in regions affected by FCV. It can take risks and mobilize financing rapidly across all income groups, with flexibility in implementation models and thematic coverage.

Tools to inform programs and policies:

Risk and Resilience Assessments (RRAs) serve as the basis for country engagements and provide evidence to inform Systematic Country Diagnostics and Country Partnership Frameworks. MICs that have benefitted from these assessments include Colombia, Iraq and Tunisia, while RRAs for Namibia and Sri Lanka have been proposed.

Recovery and Peacebuilding Assessments (RPBAs) help to identify, prioritize and sequence recovery and peacebuilding activities and coordinate planning and implementation. RPBAs have been conducted in MICs such as Ukraine, and an assessment is underway in the Philippines to support recovery and reconstruction of Marawi. This will help improve understanding of financing needs associated with reconstruction and offers a platform to ensure that investments are deployed in ways that mitigate risks of future conflicts elsewhere in the Mindanao.

Security and Justice Public Expenditure Reviews (PERs) can help decision-makers analyze key aspects of expenditure policy in the security sector, such as the fiscal space, efficiency, effectiveness, transparency, and accountability. They are performed at the request of partner governments to better integrate police, courts, and defense institutions in the budget process. PERs of the security sector have been conducted in a number MICs, including Peru (2016), Mexico (2015), and El Salvador (2012).

Knowledge to bridge the evidence gap:

Pathways for Peace, a Joint UN-World Bank study, looks at how development processes can better leverage diplomacy, mediation, security, and other tools to prevent violent conflict and emphasizes inclusive approaches. A cross-WBG team has been formed to operationalize key recommendations from the study.

Forcibly Displaced, a flagship study produced in partnership with UNHCR, examines data to better understand the scale and scope of the displacement challenge and suggests a development response that complements humanitarian assistance to help both refugees and host communities manage the socioeconomic dimensions of displacement crises. The approach detailed in this study underpins the Bank’s forced displacement work in middle- and low-income host countries.

Partnerships across humanitarian, development, security, peace, and other communities are critical to delivering more effectively and efficiently in FCV environments, and are being utilized across a range of analytical and operational activities. Led by the UN and World Bank, the Humanitarian-Development-Peace Initiative aims to spur a new way of working among actors in these fields to identify collective outcomes and deliver comprehensive and integrated responses including sharing data, joint assessment of needs, and aligned multiyear operational planning. New partnerships with international NGOs are being explored, such as with the International Committee of the Red Cross, in facilitating famine risk response, to leverage the unique access they have to the most vulnerable populations.

To manage the forced displacement crisis, the WBG is working in close partnership with the UN Refugee Agency (UNHCR) at both the country and global levels.

A joint UNHCR-WBG data center aims to enhance the ability of all stakeholders to make evidence-based decisions and will focus on microdata collection, analysis, and dissemination. An MOU will be signed during the upcoming WBG-IMF Spring Meetings in April.

An MDB platform on forced displacement and economic migration brings together seven MDBs (WBG, EIB, EBRD, AfDB, AsDB, IsDB, IADB) for stronger strategic alignment and operational coordination. The platform will support activities that strengthen the analytical evidence base on “what works” in development interventions related to displacement and migration, as well as provide technical assistance for specific programmatic engagements.

The Results of Our Work

The Jordan Emergency Health Project is an example of how IBRD leveraged $50 million to help Jordan maintain the delivery of primary and secondary health services to poor uninsured Jordanians and Syrian refugees. This assistance is part of a larger $150 million project, which is being financed in parallel by the Islamic Development Bank, and supported by the Global Concessional Financing Facility. The package of support will help extend critical health services to 3.5 million beneficiaries over the next two years.

In Ukraine, the Recovery and Peacebuilding Assessment for Eastern Ukraine, completed in April 2015 with support from the WB, UN and EU, is providing capacity building support to a newly-established ministry that is leading recovery efforts, as well as analytic work on the development dimensions of displacement and combatant return. Community-based activities are being piloted to help meet the socio-economic needs of the more than 1.7 million internally displaced people and host communities impacted by the conflict.

In Iraq, the Emergency Operation for Development Project (EODP) helped reconstruct the 40-meter long Al-Haronya bridge, which had been blown-up by the Islamic State in Iraq and Syria (ISIS), cutting off the route for many Iraqis who commute between the cities of Baquba and Muqdadya for work and school each day. Five other bridges of a similar nature in Salah Ad-Din and Diyala governorates have also been completed and opened to traffic. About 62.5 kilometers of regional roads are being rehabilitated as part of the project.

Efforts to prevent violent conflict are an increasingly important part of the Bank’s work:

Given the urgency and volatile nature of FCV, the WBG is sharpening its focus on prevention and managing fragility risks – a frontier challenge for development. To take this agenda to the next level, a number of initiatives are currently underway or being explored, including: