Climbing Higher: Toward a Middle-Income Nepal 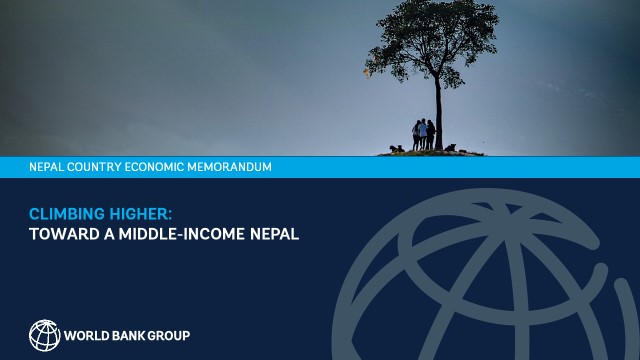 The Country Economic Memorandum (CEM) is a comprehensive overview of Nepal’s past economic performance, current challenges and prospects ahead. The latest CEM 'Climbing Higher: Toward a Middle Income Nepal' states - Despite the successful and rapid reduction in poverty, there is an urgent need to change Nepal’s development model because the current development path is not aiding Nepal’s escape from the low-growth trap it is in. However, without comprehensive reforms to address its long-standing challenges, the report finds that Nepal will probably not become a lower-middle-income country before 2030. Hence, the report underscores that a systematic assault is needed to break the vicious cycle and create the right balance between job creation at home and exports of labor. Read more in our press release. The report is also available in Nepali.

Nepal’s recent history of development is marred by a paradox. Many countries in the world have experienced rapid growth but modest poverty reduction, as income has increasingly concentrated in the hands of the wealthy. Nepal, however, has the opposite problem—modest growth but brisk poverty reduction. The country has halved the poverty rate in just seven years and witnessed an equally significant decline in income inequality. Yet, Nepal remains one of the poorest and slowest-growing economies in Asia, with its per capita income rapidly falling behind its regional peers and unable to achieve its long-standing ambition to graduate from low-income status.

Unfavorable starting conditions have meant that Nepal’s development path was never going to be easy. First, historical and natural endowments make development challenging. The country’s geography—landlocked externally and challenging topography internally—represents a natural barrier to its development. Its history of extractive political regimes left Nepal with extremely low levels of physical and human capital and illiteracy rates of 90 percent in 1951. Second, a propensity for natural disasters, which most recently included two devastating earthquakes in 2015, contributed to the destruction of physical assets and near continuous setbacks. Third, Nepal is uniquely exposed to India and its pace of economic development, both for good and bad. Fourth, during the past two decades, the country has been undergoing a prolonged period of political transition, from a monarchy to a multiparty democracy, marked by armed conflict, ethnic protests, and frequent changes in government. Put simply, Nepal has faced enormous obstacles on its path to development.

Challenging development constraints have been further compounded by unsupportive policy choices. The economic history of Nepal over the past 45 years provides important lessons. The resulting current state of Nepal’s economy not only reflects the challenging constraints to development, but also policy choices that have resulted in weak performance of the large agricultural sector, low public investment and capital accumulation, and low productivity growth. During the past 45 years (1970–2014), Nepal grew at an average annual rate of 4 percent, while the growth rate of per capita income was the lowest in South Asia, averaging just 2 percent during this period.

Given this backdrop, it is not surprising that outward migration has grown in importance, especially in the post conflict period. In FY1996, approximately one in four Nepali households received some form of remittances. This became one in three by FY2004 and more than one in two by FY2011. Not only did more households start receiving remittances, but the amount of remittances received also increased over the years. The first half of the 2000s saw a drastic increase in remittances, from 2 percent of gross domestic product (GDP) in FY2000 to 15 percent in FY2005, 22 percent in 2010, and as much as 30 percent in FY2016, making Nepal the highest recipient in the world among countries with a population of over 1 million and measured as a share of the economy. Given the phenomenal rise in remittances, they are likely the primary engine behind the improvements in living standards witnessed in Nepal, both directly (households receiving remittances) and indirectly (increased labor income of those that remained).

Despite the successful and rapid reduction in poverty, there is an urgent need to change Nepal’s development model. Large-scale migration is not a sign of strength, but a symptom of deep, chronic problems. Remittances are providing a safety net so people do not fall into poverty, but are not being used to leverage rapid growth and greater opportunity. Large-scale migration is rapidly, and in many cases, permanently, depleting the country’s stock of human capital. And while remittances are helping boost household expenditure, they are doing little directly to improve public service delivery. Consequently, the quality of education, health care, and infrastructure remains abysmal.

Further, the current development path is not aiding Nepal’s escape from the low-growth trap it is in. Historically, low economic growth led to a shortage of employment opportunities at home, which is fueling labor outmigration. Labor outmigration has resulted in a large flow of remittances (in per capita terms and as a share of GDP). However, large-scale migration and the ensuing remittances have also contributed to the steady loss of competitiveness (through appreciation of the real exchange rate) and have enabled the growth of low-productivity services. Further, they have reduced pressure to generate more productive employment at home. Consequently, this cycle compounds existing and longstanding challenges that hamper Nepal’s competitiveness, furthering weak growth and limited domestic opportunities. All these factors combined mean that Nepal—home to some of the world’s most industrious and adventurous people—could be stuck in a low-growth, high-migration equilibrium for years to come (Figure ES.1).

Perhaps the most detrimental aspect of large-scale migration is that it relieves the pressure on policy makers to be more accountable and to deliver results. Large-scale migration solves several problems for Nepal. It alleviates unemployment; enables greater consumption; and leads to higher tax collection, given the high dependency of taxation on imports (currently generating half of all revenues). At the same time, it lessens the pressure on the political class to break with the long history of trading favors for patronage. Frequent change of governments has become a long-established norm; the country has had 22 governing coalitions in the last 26 years. This political instability has hampered the country’s development and disillusioned its citizens, contributing to further migration (Figure ES.2)

Without comprehensive reforms to address its long-standing challenges, Nepal will probably not become a lower-middle-income country before 2030. To determine the growth rate of potential GDP going forward in a business-as-usual scenario, we keep key variables—investment-to-GDP, growth of human capital, growth of productivity—at recent historical averages and complement them with United Nations (UN) population projections. As a result, potential or trend rate of growth slows to 3 percent from the current 4 percent. At this trend rate of growth, per capita income would reach US$958 in 2030. At present, the World Bank defines lower-middle-income countries as those with a per capita income in excess of US$1,025. However, under a reform scenario where, for example, both investment and productivity improve until 2021 and then level off, Nepal’s trend rate of growth accelerates to 4.3 percent and graduation from lower-income-country (LIC) status occurs in 2027.

Consequently, a systematic assault is needed to break the vicious cycle and create the right balance between job creation at home and exports of labor. Marginal interventions are unlikely to help break the self-reinforcing dynamics that have kept Nepal in a low-growth, high-migration trap. Nepal needs a comprehensive approach that will both boost investment and accelerate productivity by carrying out the following:

1.       Breaking down policy barriers: To tackle the persistent challenges of low investment and weak productivity, Nepal needs to dramatically restructure its public investment program; intensify the level of competition in the domestic market in sectors such as transport, logistics, and telecommunications; reduce the cost of doing business; and steadily integrate the economy with the rest of the world (see Part III).

2.       Building new sources of growth: Unleashing large investments in hydropower would be a game changer for Nepal. It would not only lead to massive new investments and improved productivity, but it has the potential to lift wages significantly and help to partially reverse migration and increase competitiveness in downstream industries (see Part IV).

3.       Revitalizing existing sources of growth: Reforms in agriculture, which account for one-third of GDP and two-thirds of the labor force, are key to further poverty alleviation, improving productivity and releasing labor for new sources of growth (see Part V).

4.       Investing in people: Nepal is in the midst of a demographic transition. As a result of lower fertility rates, the share of the population that is working age is now greater than the share of the population that is not. This is the demographic dividend. To fully capture the benefits of the demographic dividend, investing in the skills of Nepali youths is imperative. Putting more human capital to productive use in Nepal is critical for a stronger and more sustainable growth path in the future (see Part VI).

History also teaches us that Nepal has undertaken bold and sweeping reforms before, and it can do so again. Between 1986 and 1996, Nepal instituted broad-based reforms that had a positive effect on the economy. Growth during this period averaged 5 percent, and was the highest in Nepal’s modern history, while growth of per capita income increased to 2.4 percent. The economy became more open and diversified as the share of trade in GDP and exports, and the share of manufacturing, nearly doubled. These reforms were underpinned by the political transition to democratically elected governments that also gave the people a sense of new purpose. Today, they serve as a stark reminder that bold and challenging reforms in Nepal are indeed possible.