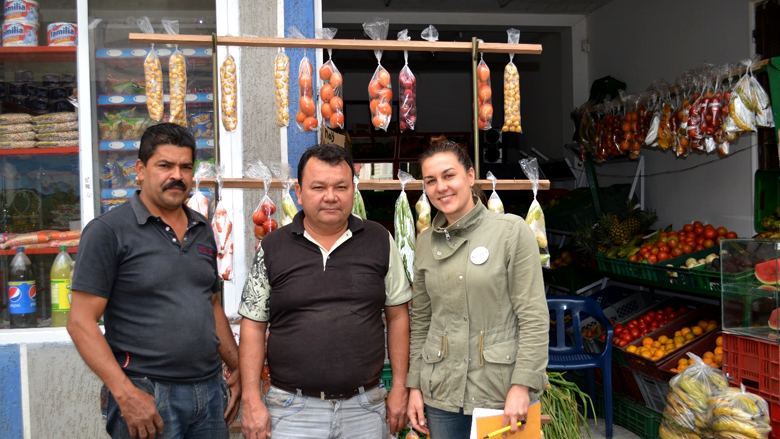 Agruppa visiting a microenterprise in Bogotá.

Micro-entrepreneurs in developing countries are often constraint by inefficient supply chains, facing high travel costs and high prices in purchasing their inventory. At the same time, due to their small scale, they buy in small quantities, limiting their benefit from economies of scale, whether in bulk discounts or transport efficiencies. Small-scale food vendors in Bogotá, whose customers are residents of low-income neighborhoods, face these very issues. Based on initial research, these vendors spend an average of 15 hours per week and 20-30 percent of their weekly income travelling to the central marketplace (Corabastos) for their purchase.

Agruppa, a start-up, developed a new mobile based technology that agglomerates orders for these small vendors until they add up to wholesale quantities, purchases them from farmer cooperatives, and delivers them directly to the vendors. It is estimated that the bulk orders are priced an estimated 30% below the small orders. Through a randomized control trial, this impact evaluation will measure the direct effects of the technology on MSMEs, as well as indirect effects such as the loss of sales of the competitors who do not take-up the technology.

In the beginning, the Agruppa service operated as initially planned. Two thirds of business owners adopted its service and were able to save time and costs of going to the market. These figures varied over the course of the project, but at Agruppa’s peak usage, firms benefited on average of 0.17 fewer days traveling to the market, which corresponded to a cost reduction in 20,566 COP or 6.66 USD, equivalent to 5% of weekly profits.

Purchase prices on the five main fruits and vegetables offered by Agruppa decreased by 6 to 8 percent, and these cost savings translated into both reduction in consumer prices and increase in profits. Non-participating firms decreased their prices as a result as well. By the end of the evaluation period, however, business owners saw a reduction in sales of items that were beyond the fruits and vegetables offered by Agruppa, and this led to a reduction of total sales by 9%. Agruppa usage dropped to 16% and eventually led to its closure. Overall, the study sheds light on how a new technology can help solve search frictions as well as market structure issues on microenterprises.