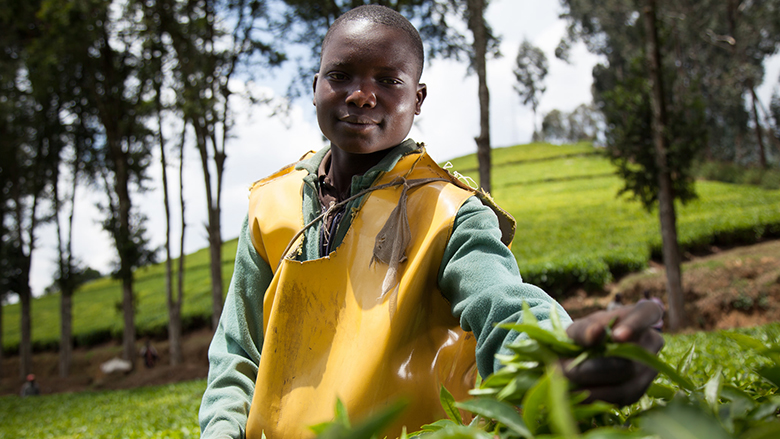 The vast majority of the world’s poorest households depend on farming for their livelihood. The long history of price distortion in agriculture across the world has left many countries with outmoded price mechanisms for agricultural commodities. These mechanisms, often reflecting pro-urban and anti-agricultural and anti-trade biases, can also depress the earnings of farmers.

In Rwanda, the Government identified farmers’ perceived low level of remuneration for their green tea leaves as a constraint to the development of the Tea sector, and has reformed the pricing mechanism for green leaf from factory-cost basis to a more transparent mechanism that directly links the prices paid to farmers to the international market price for “made tea.” By studying the effects of this reform, this impact evaluation can inform and motivate similar price mechanism reforms in agricultural commodity markets in other contexts.

Tea forms a key sector in Rwanda as one of the country’s main export crops and largest employers, employing about 60,000 people currently. Unsurprisingly, it is viewed by the government as central to the country’s economic development for its potential to raise smallholder farmer incomes (reducing poverty), provide investment opportunities for private investors (supporting growth), and assist the country in meeting its balance of payments targets.

IFC supported the green leaf pricing reform of July 2012 under the second phase of the Rwanda Investment Climate Reform Program. This program aims to improve agribusiness market efficiency through market, legal, and regulatory remedies and is a part of a broader WBG effort to increase exports and investment in the Rwandan agribusiness sector, with a particular focus on horticulture and tea. The Government of Rwanda has since formally requested assistance with their ambitious tea sector expansion program from the WBG.

This impact evaluation focuses on the effect of the pricing reforms in order to inform the ongoing reform process and any complementary reforms or investments in tea, of its impact on the GoR’s objectives for the sector and its stakeholders.

Pre-reform, the price of green leaf tea paid to farmers was determined on the basis of the self-declared cost of factories rather than on the actual market prices received by the factories for their made tea. This has a number of limitations, most notably disconnecting farmers from world market signals and thereby distorting incentives. The overall effect was to limit farmer earnings, and reduce incentives for further tea plantation.

At the end of 2012, the Government of Rwanda's reform of green leaf pricing came into force, linking green leaf prices to international market prices for ‘made tea’. Under the new mechanism, prices paid to farmers are linked to the price obtained for Rwanda’s tea in the international market. Prices are fixed every six months for each factory using a weighted average price of total sales on international markets. Additionally, farmers can receive a bonus for high quality and penalties for low quality, thus rewarding the quality of tea. In order to limit the downside risk on international price movements, the farm gate price can never fall below the current floor of RWF 100.

The tea pricing reform stems from the Government of Rwanda's core economic objectives of growth in exports, jobs and investments, and poverty reduction goals of raising rural incomes and providing greater food security. The price reforms aim to remove distortions to incentives for improving the quality and output of tea. The increase in export earnings desired by the Government of Rwanda comes from increased factory investment which results from market incentives to cultivate, and the availability of sufficient raw material to be able to do so. Improvement in ‘made-tea’ prices for farmers boosts their incomes and enhances their ability to achieve food security. Additionally, productivity gains on tea crops are also assumed to have spillover effects for food security crops, where both are grown. These mechanisms are outlined in greater detail below: 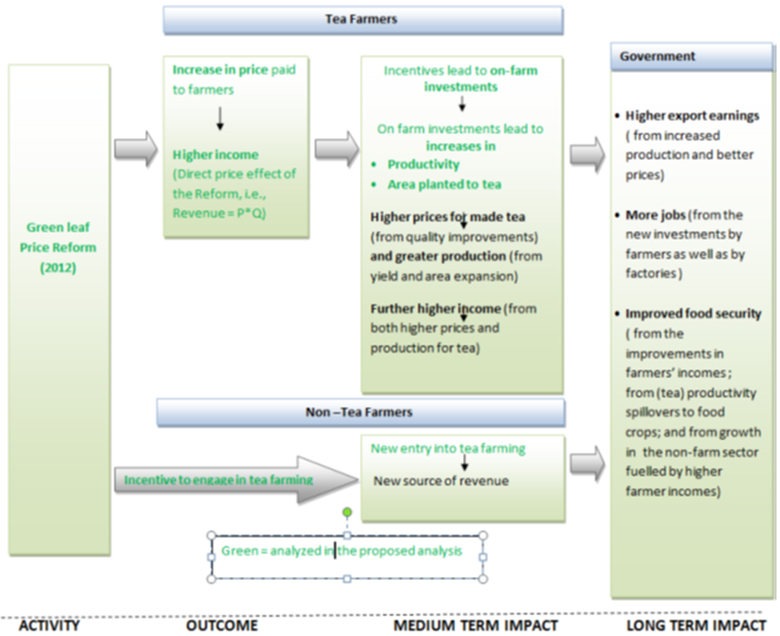 The evaluation proposes to estimate the impact of the reform on tea production, tea quality, and the living standards of Rwandan smallholder tea farmers. The study uses household survey data collected at baseline and in a follow-up, exploiting heterogeneity across tea estates in a fixed-effects framework, and uses a differences-in-difference approach to compare tea-producers to non-tea producers.

The evaluation proposes to estimate the impact of the reform on tea production, tea quality, and the living standards of Rwandan smallholder tea farmers. The study uses household survey data collected at baseline and in a follow-up, exploiting heterogeneity across tea estates in a fixed-effects framework, and uses a differences-in-difference approach to compare tea-producers to non-tea producers.