WASHINGTON, April 26, 2017— The World Bank is forecasting higher prices for industrial commodities, principally energy and metals, in 2017 and next year.

The World Bank in its April Commodity Markets Outlook is holding steady its crude oil price forecast for this year at $55 per barrel, increasing to an average of $60 per barrel in 2018. Rising oil prices, supported by production cutbacks by Organization of the Petroleum Exporting Countries (OPEC) and non-OPEC states, will allow markets to gradually rebalance. These oil price forecasts are subject to downside risks should the rebound in the U.S. shale oil industry be greater than expected.

Prices for energy commodities, which also include natural gas and coal, are projected to jump 26 percent this year and 8 percent in 2018. In line with oil price forecasts, natural gas is anticipated to gain 15 percent this year, led by a jump in U.S. prices. Coal is seen climbing 6 percent in 2017, due to earlier supply restrictions in China, which consumes half the world’s coal output.

Prices for non-energy commodities, which include agriculture, fertilizers, and metals and minerals, are forecast to increase in 2017, the first rise in five years. Metals prices are projected to jump 16 percent this year due to strong demand, especially from China, and supply constraints, including mine disruptions in Chile, Indonesia and Peru.

Labor strikes and contractual disputes at large mines have contributed to higher copper prices. However, precious metals are expected to decline by 1 percent this year and 1 percent next year as benchmark interest rates rise and safe-haven buying ebbs.

Among the components of non-energy commodities, the agriculture price index as a whole is expected to remain stable this year, as declines in grains are expected to be offset by price rises for oils and meals and raw materials.

“Favorable conditions have pushed stocks-to-use ratios to 15-year highs for wheat, maize and rice,’” said John Baffes, Senior Economist and lead author of the Commodity Markets Outlook. “Assessments point to a surplus this year and next for global supplies of key grains.”

Beverages, which include coffee, cocoa, and tea prices, are forecast to drop more than 6 percent in 2017 due to greater-than-expected supply. Agricultural raw materials are projected to rise 4 percent. The end of the El Niño/La Niña cycle limits upside price risk for the 2017-2018 agricultural commodity forecasts. 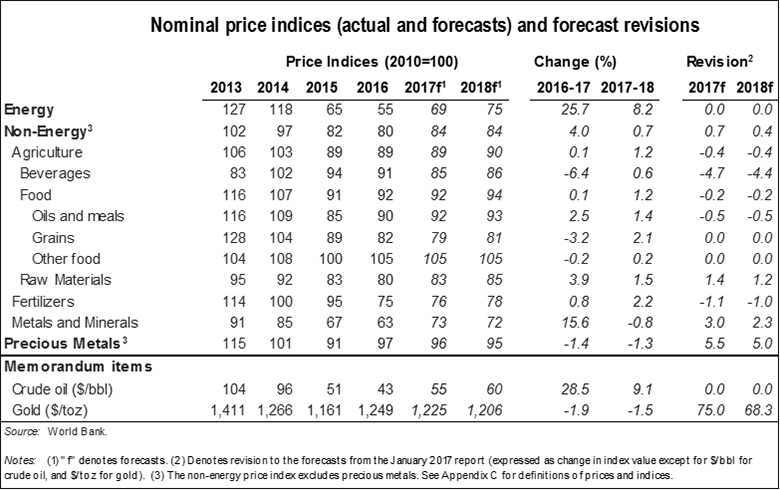