ISTANBUL, April 08, 2014 – The Turkey-European Union Customs Union (CU) has brought greater benefits than a simple free trade agreement (FTA) would have, but more can still be done to improve trade between the parties, according to a new World Bank Group report released today. In particular, trade between the parties should be opened to services and agricultural trade.

The report, Evaluation of the EU-Turkey Customs Union, which was funded by the European Commission, highlights the impacts of this pioneering agreement since it was first implemented nearly 20 years ago. Most notably, economic analysis shows that under an FTA, exports from Turkey to the EU would have been up to 7.2 percent lower, with EU exports to Turkey as much as 4.2 percent lower. But while the value of bilateral trade between the two has increased dramatically, the changing global economy is exposing issues that the CU should now address—specifically the need to expand the trade arrangement beyond most industrial goods to also cover agriculture and services and the need to formalize parallel negotiations on FTAs with third countries. These changes would help both parties adapt to the growth in global trade, the increasing role of emerging market economies and the eastward expansion of the EU, according to Ian Gillson, Senior Trade Economist in the World Bank’s International Trade Unit and lead author of the report.

“There have been some tectonic shifts in the global economy since 1995,” Gillson said. “Today, there’s an urgent need to re-think parts of the trade relationship between Turkey and the EU. More integration is needed.” 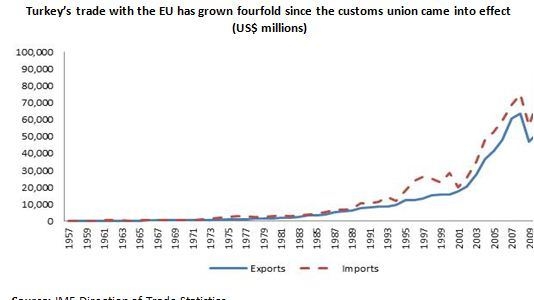 Widening the trade relationship to include services trade could bring an estimated US$1.1b in static gains, according to the report. Services account for 60 percent of Turkey’s GDP, but the sector is excluded from the CU. Regulations on services trade in Turkey and EU countries have different levels of openness in some key sectors, so there is still untapped potential to increase trade through liberalization and harmonization.

Agriculture accounts for 10 percent of Turkey’s GDP and is currently excluded from the scope of the CU. A number of measures currently provide a high degree of import protection for Turkey’s agricultural products: the average most favored nation (MFN) tariff is high, at 41.7 percent, and tariff quotas and price regulation also impede agricultural trade. But if the two parties would liberalize bilateral agricultural trade, some Turkish exports like oils and tomatoes could be more competitive in Mediterranean countries, according to the report. For this to be feasible, however, Turkey would need to comply with EU rules on food safety, veterinary, and phytosanitary issues.

Opening both services and agriculture trade would also fall in line with recent trends in other FTAs. Responding to slow progress in the World Trade Organization (WTO) Doha Round of multilateral trade negotiations, both Turkey and the EU have made FTAs a policy priority. However, under the current design of the CU, Turkey is not permitted a seat at EU negotiations with third parties. This would not necessarily be problematic if Turkey were able to obtain the same agreement from these third parties, but parallel agreements have not always been concluded. For example, Turkey has been unable to reach agreements with Algeria, South Africa, or Mexico following their FTAs with the EU.

“This asymmetry is potentially very costly for both parties,” Gillson said. “It risks the introduction of origin controls, the absence of which has been a key source of the benefits from the current CU arrangement.”

The report also evaluates a range of other barriers to greater trade between Turkey and the EU, including transport quotas, business visas, and trade defense instruments, and makes recommendations how to overcome existing irritants.