WASHINGTON, June 13, 2013—The economic growth of the EU11[1] region fell in 2012 and will remain slow in 2013 due to the continued recession in the Euro area and subsiding domestic demand, says the World Bank’s latest EU11 Regular Economic Report.

“The recession in the Euro area and weak domestic demand dampened EU11 economic performance in 2012. Overall, the EU11 year-on-year growth rate dropped from 3.1 percent in 2011 to 0.8 percent in 2012,” said Gallina Vincelette, Senior Economist in the World Bank’s Europe and Central Asia region and lead author of the report. “However, the EU11 region is still growing faster than the EU15[2], whose economic activity contracted 0.4 percent last year.”

All EU11 countries, with the exception of Latvia, grew more slowly in 2012 than in 2011, and the overall GDP growth of 0.8 percent in 2012 was just a quarter of the pace recorded the year before.  According to the report, domestic demand, in particular investment, contracted in most of the countries, leaving net exports as the sole driver of growth for the EU11 region. In addition, the number of EU11 countries in recession doubled to four, with the Czech Republic and Hungary joining Slovenia and Croatia. 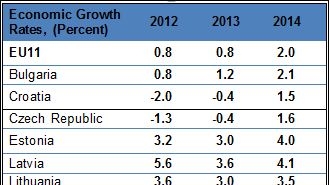 This weak economic activity in the EU11 resulted in further job losses.  Prolonged uncertainty, corporate sector restructuring, and recession in some EU11 countries led to increases in unemployment rates across the region. After stabilizing at around 10 percent for most of 2010 and 2011, unemployment exceeded 11 percent in early 2013. Employment growth was negative throughout 2012, affecting construction, industry, and public administration in particular.

And even though net exports supported economic growth in 2012, the report notes that EU11 trade performance was disappointing.  Both exports and imports decelerated as global trade was put on hold because of slow economic growth in the high-income countries and recurring bouts of uncertainty over the future of the euro.  In 2013, the EU11 region’s imports and exports started declining as intra-EU trade flows decelerated.  While non-EU markets’ expansion continued to help generate favorable trade results for EU11, it was not able to compensate for the weakened exports demand from the EU.

While the pace of fiscal tightening slowed in 2012, the report says that the EU11 governments largely delivered on their fiscal commitments. In addition, they continued to pursue medium and long-term fiscal structural reforms aiming at strengthening public finances.

There are indications that the EU11 region will continue to grow in 2013, but at a slow pace, according to the report. Provided that the Euro area economy gains strength, the near-term outlook for the EU11 countries is also expected to gradually improve. While in 2013, the EU11 growth will still be below its potential – hampered by weak domestic demand, ongoing fiscal tightening, muted credit growth, and a challenging external environment – it is projected to pick up in 2014.  The labor market is likely to recover only in the medium-term.

Maintaining prudent fiscal policy and supporting sustainable economic growth in the EU11 remain a priority to mitigate the adverse impact of potential shocks from the Euro area. Fiscal policy is set to remain contractionary, but the speed of fiscal consolidation is expected to further slow and hence its effect on economic growth will be less negative as compared to 2012. Monetary policy will stay supportive of economic growth, with further cuts in policy rates in some EU11 countries and unconventional measures in others, even though the scope for further monetary easing is already tight.

“Given the limitations of fiscal and monetary policy to boost growth, the EU11 governments should focus their attention on the unfinished structural agenda aimed at increasing their countries’ economic potential,” said Yvonne Tsikata, Director for Poverty Reduction and Economic Management for the World Bank’s Europe and Central Asia Region.  “Reforms in the areas of labor markets and education, public administration, the business environment, public finance management, and investment planning are some of the priority areas for the EU11 countries going forward.”

The ‘Special Topic’ section of this edition of the EU11 report analyzes the issue of job creation in the EU11 prior to and after the global financial crisis, using evidence from firm level data. The topic will be further explored in the forthcoming Europe and Central Asia regional report on jobs.

The EU11 Regular Economic Report (EU11 RER) is a semiannual publication of the Poverty Reduction and Economic Management Department of the World Bank’s Europe and Central Asia Region.  It monitors macroeconomic and reform developments in the EU11 countries, and provides in-depth analyses of key policy issues.

[1] The EU11 is a group of countries which include 10 European Union (EU) member states – Bulgaria, Czech Republic, Estonia, Hungary, Latvia, Lithuania, Poland, Romania, the Slovak Republic, and Slovenia – and one forthcoming member, Croatia.