The Europe and Central Asia region (1) suffered a significant economic slowdown in 2012, as the region faced significant headwinds, including weak external demand, deleveraging by European banks, poor harvest and inflationary pressures. As a result, growth fell to 2.7 percent in 2012, compared with 5.6 percent in 2011 with a sharp slowdown in developing Europe and less severe adjustments among the Commonwealth of Independent States.

External conditions have significantly improved in 2013, with calmer financial markets and a recovery in global trade. As a result, capital flows to the region have increased with a sharp improvement in cross-border syndicated bank lending. The pick-up in bank lending partly reflects the moderation in the pace of Euro Area bank deleveraging and, going forward, this should ease the supply-side credit constraints. In addition, several sovereigns and corporates successfully tapped international bond markets. Similarly, following the sharp decline in 2012, Foreign Direct Investment (FDI) in the region is expected to rebound this year.

Despite the recovery in global trade, however, the region’s export performance has been mixed. Export growth has been weak in Russia and Latvia but considerably strong in Romania, Lithuania and Turkey. Several countries have benefited from increased diversification in terms of export destination in recent years. 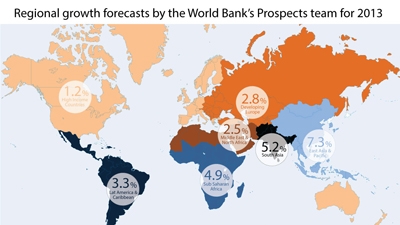 GDP growth in Europe and Central Asia is projected to rise only slightly in 2013 to 2.8 percent. While growth in the region will be supported by better harvest and improved external conditions, the rebound will be constrained by the weak carry-over from last year, ongoing fiscal adjustments, and high unemployment in several countries, particularly in developing Europe.

Growth in the two biggest economies in the region – Russia and Turkey – has been held back by supply bottlenecks. While growth in Russia is projected to slow to 2.3 percent in 2013, from 3.4 percent in 2012, growth in Turkey is expected to increase to 3.6 percent from 2.2 percent, supported by relatively loose macroeconomic policies. As a result, Turkey’s current account deficit is expected to widen further to 6.9 percent in 2013.

Going forward, growth in the region should firm to 3.8 percent in 2014 and 4.2 percent in 2015 as the fiscal and financial restructuring that has been a drag on growth within the region and in the Euro Area loses intensity. Several domestic factors, including fiscal and monetary policies, and policies addressing structural issues, are expected to generate differentiation in economic performance among countries in the region.

While overall risks are less pronounced than a year ago, the region’s economic outlook is still subject to various challenges. First, although the risk of a serious Euro Area crisis has diminished, out-turns in developing Europe will remain sensitive to the speed of the recovery in the region’s high-income neighbors.

In the longer term, the cost of capital is likely to rise as high-income countries step back from quantitative easing. Initially, this could expose vulnerabilities in the region that have built up during periods of sustained low borrowing costs. In the long-term, it will reduce growth, capital flows and FDI to the region.

(1) For the purpose of this Overview, the Europe and Central Asia region includes 21 low- and middle-income countries with income of less than $12,276 GNI-per capita in 2010. This classification excludes Croatia, the Czech Republic, Estonia, Hungary, Poland, Slovakia, and Slovenia. The list of countries for the region may differ from those contained in other World Bank documents.