Ten Years of Success: How Colombia Used a World Bank Program to Help Shock-Proof its Economy 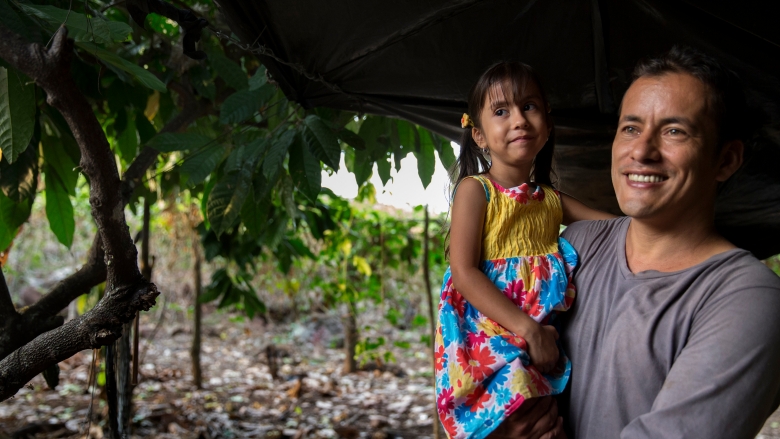 Colombia and the Government Debt and Risk Management (GDRM) Program celebrate the 10-year anniversary of a successful partnership in strengthening the country’s resilience to economic shocks.

It seemed like the start of a new financial contagion in emerging markets.

In September 2015, the currencies of a wide range of emerging-market economies nosedived on fears that Chinese economic growth might slow, and that the U.S. central bank might begin to raise interest rates. The Brazilian real, the Turkish lira, and the South African rand sank to record lows. “It’s carnage out there for emerging markets,” one headline read.

Colombia, however, came through unscathed. Its economy grew 3.1 percent that year, one of the highest rates in the region, as poverty and income inequality receded. It had weathered the storm by putting in place what the International Monetary Fund called a “strong policy framework” and a “coordinated and proactive policy response.” An important component of this was the layer of defenses it had established on public debt and risk management, with the support of a group of international partners.

In 2011, just four years before, Colombia had partnered with the Government Debt and Risk Management Program, a World Bank initiative sponsored by the Swiss State Secretariat for Economic Affairs (SECO). Since then, Colombia has steadily improved its debt-management strategy as well as its borrowing operations, governance, institutional arrangements, and coordination on fiscal and monetary policies.

in at least five important areas:

Two years into the GDRM partnership, Colombia published a formal medium-term debt management strategy. This was a direct result of GDRM technical advisory work to enhance Colombia’s analytical model for evaluating the costs and risks of alternative financing options. The strategy focused primarily on developing domestic sources of financing and proved to be fundamental in building resilience, as evidenced during the emerging markets turmoil experimented in 2015.

The debt strategy was later revamped for the 2018-22 period,  featuring improvements such as optimizing the country’s debt-issuance policy through different currencies, rates, and terms. These improvements have enabled Colombia to expand to other markets—including the Euro market—to better diversify the currency risk of its debt portfolio. The updated approach includes stronger coordination with Colombia’s General Directorate of Macroeconomic Policy. It also takes Colombia’s balance sheet into account by considering oil export revenues as well as foreign-currency debt issuances in the underlying analyses. For the first time, the revised strategy guides the country’s Annual Borrowing Plan.

Colombia also strengthened its communication with market participants by creating a website dedicated to investor relations and by holding regular meetings with primary dealers of government securities.

"Colombia’s drive for public debt transparency and institutionalization has been fundamental across many reforms. From Debt Management Strategy being available on Ministry of Finance’s website to developing a manual for Treasury operations, the Colombian authorities have worked with the GDRM Program to accomplish sustainable debt reforms. "
Elizabeth Currie
GDRM Program expert

By the standards of emerging-market economies, Colombia’s domestic debt market was already relatively well developed in 2011. However, the yield curve for government securities—which influences the cost of borrowing for everything from mortgages to consumer and corporate loans—was not entirely predictable for the maturities in the three-to-12-month range because of a lack of liquid debt instruments in the market.

In ideal circumstances, finance ministries issue government securities along the whole yield curve including the short-term to help establish a benchmark borrowing rate. In Colombia, however, instead of the Ministry of Finance issuing the short-term securities (three- to 12-month Treasury bills), it was the Central Bank that was issuing these instruments for monetary policy operations. This created parallel and competing yield curves, which disrupted price discovery.

In 2015, shortly before the economic contagion hit the global markets, Colombia’s Ministry of Finance began issuing Treasury bills. The Central Bank stopped using its own securities to sterilize the liquidity. This allowed the Ministry of Finance, being the only issuer of government securities, to extend its systematic benchmark-building strategy to short-term reference rates.

In 2020, Colombia launched its first 30-year Treasury Bond in the domestic market to reduce its rollover risk and provide the market with a new long-term benchmark security. For this issuance, the government introduced introducing new legislation to enable syndications.

Over the years, Colombia has also diversified the investor base. It made the Colombian domestic debt more attractive to foreign holders of Treasury bonds through tax advantages and initiated other market reforms. Foreign investor participation in the domestic bond market grew from 6 percent in 2011 to 25 percent in 2018.

Finally, Colombia reformed its primary dealer system to improve the efficiency of the government securities market, with better alignment[1] with international best practices.

"The government yield curve in Colombia is solid, something that the market can rely on. That means, for all private sector financing operations, be that financing for roads or hospitals or airports, or banking operations like mortgages or consumer lending, Colombia has a very good reference. "
Antonio Velandia
GDRM Program expert

Colombia’s Central Bank and Ministry of Finance units lacked the necessary formal mechanisms to coordinate their activities, as observed in the issuance of short-term securities.

To strengthen coordination with the Central Bank, the Ministry of Finance created an investment policy for managing excess-liquidity accounts. It also developed a manual of procedures for Treasury operations and started coordination committees between the Treasury and Central Bank.

The Ministry of Finance also strengthened coordination between the Debt Management Office and the Directorate of Macroeconomic Policy, leading to better information flow on macroeconomic and fiscal data regarding the development of the debt-management strategy.

These coordination measures allowed Colombia to go to the markets with one voice, improve the capacity of the country to develop the domestic market and strengthen Colombia’s resilience to external financial shocks.

Colombia improved its framework for managing potential financial risks from government guarantees to state-owned enterprises. The Debt Management Office improved its methodology to determine the appropriate fees and collateral required for the government to issue guarantees. The policy was institutionalized[2] and applied on loans obtained by three public agencies.

"For a state-owned enterprise to survive and thrive, it needs to raise stable, low-cost financing, many times through government guarantees. Colombia and GDRM Program’s partnership resulted in better risk management for guarantees and other contingent liabilities. Colombia understands and proactively manages these risks."
Rodrigo Cabral
GDRM Program expert

Besides debt, risk, and cash management, the Colombian Treasury was also responsible for asset management for state holdings. The Ministry of Finance modified its organizational structure and created a new General Directorate of State Holdings specializing in asset management, thus focusing the Treasury on its essential functions.

"The GDRM Program has supported Colombia in all the critical milestones: not only in developing the domestic market, but also in mitigating fiscal risks and developing a highly sophisticated MTDS. These were all steps taken in the right direction—to reduce Colombia’s vulnerability to financial shocks. "
Cigdem Aslan
GDRM Program expert

The World Bank, under the GDRM Program, is committed to continue working with Colombia on further strengthening the country’s debt and risk-management framework, so that the government’s budget can be used effectively to respond to the global pandemic and the national finances remain resilient to economic shocks. 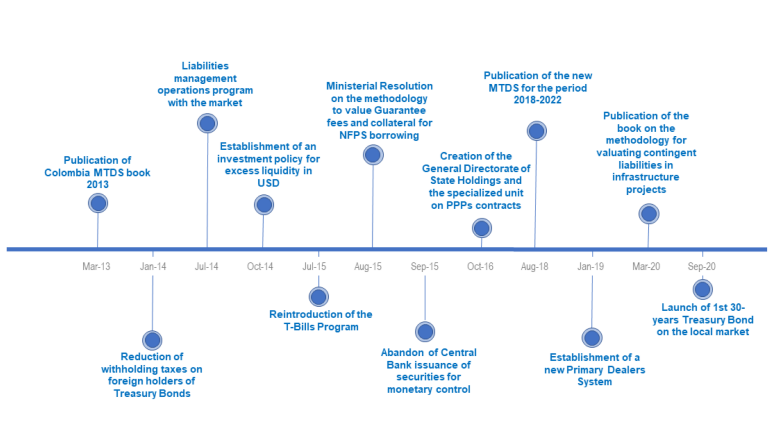