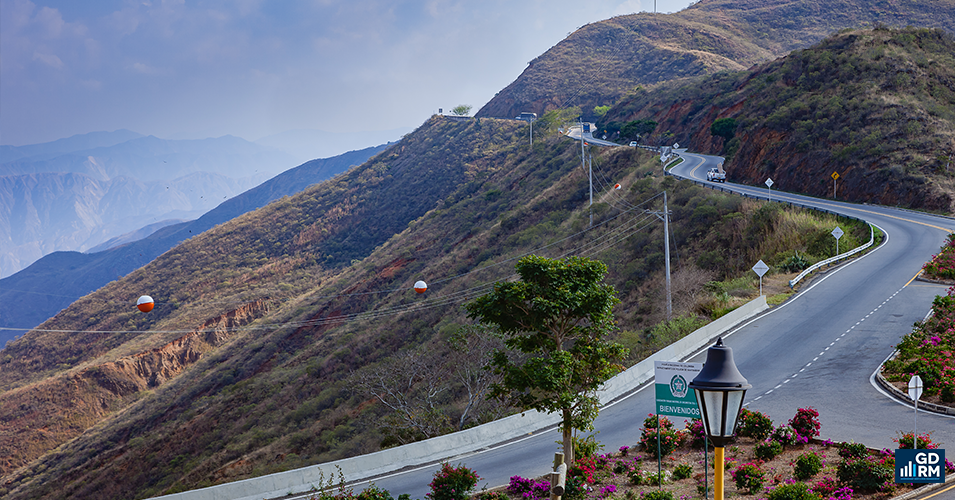 Chicamocha, Colombia -The road from Bucaramanga to San Gil in the Department of Santander in the South American country of Colombia.

On November 13, 2020, the Colombian government published the “Valuation Methodology For Contingent Liabilities in Infrastructure Projects: The Colombian Case” (English version) -a new methodology to improve the statistical approach and models used in measuring risks for infrastructure contracts. Although intended for all contracts, this new methodology will be especially critical for Colombia’s transportation projects.

A priority for the government since the early 2000s, Colombia increased transportation infrastructure investment almost by 50 percent of GDP from 2000 to 2014, using an effective public-private-partnership (PPP) program. The government is now in the process of undertaking the fourth generation of concessions—the 4G—investing 50 trillion Colombian pesos* (equivalent to US$13.6 billion) over six years to create a nationwide toll road network. Additionally, the government announced the template of the concession agreement for the 5G in Spring 2020.

But such megaprojects also create significant fiscal risks.  As a part of the PPP agreements, the government faces two critical sources of risk. One of them is a cost overrun, which can materialize if the project goes beyond the estimated budget during the implementation phase due to land acquisition,  environmental factors, or utilities. This cost creates direct, explicit liability.

The other risk is the low toll-road tariff collection rate, where the government pays the difference between the actual revenue and the estimated revenue to the partners in the PPP.  This type of risk also includes the payment of differential tariffs for people living near the toll road. These payments by the government to close the revenue gap create an explicit contingent liability as the cost is incurred when the income is lower than expected in the project.

In the early stages of the PPP program—until 2004—obligations for demand guarantees in electricity, telecommunications, and highways resulted in cumulative payments of 2% of GDP, prompting the Colombian government to explore methods to improve risk assessment and mitigation of contingent liabilities from the infrastructure projects.

Partnership with the World Bank to improve fiscal risk assessment

Colombia is a long-term member of the Government Debt and Risk Management (GDRM) Program, a World Bank initiative, funded by the Swiss State Secretariat for Economic Affairs (SECO).

The government advocated for including the development of the new methodology as a topic under the GDRM umbrella. The program had previously supported Colombia in revising and refining its methodology for quantifying the contingent liabilities of sovereign guarantees for state-owned enterprises and lawsuits against the government.

In 2019, . The ministry worked with the project-implementing institutions, such as the National Infrastructure Agency (ANI), to apply the new methodology for proposing more accurate budget allocations to the contingency fund. The GDRM program team provided topical expertise through peer reviews, acted as a sounding board for the development of the new methodology, and supported the dissemination to the public.

The Colombian government launched the deployment of the new methodology in March 2020 to subnational governments and private companies, which will be responsible for developing and implementing infrastructure projects.

At the launch event, the Minister of Transport, Angela Maria Orozco, emphasized the importance of infrastructure to Colombia—and noted the efforts made by different public entities to close the gap that Colombia has in roads, ports, and airports.

"" Doerte Doemeland, Practice Manager for Global Macro and Debt Analytics in the World Bank's Macroeconomics, Trade & Investment Global Practice. "This will allow the government and the project implementing agencies to achieve a tailored quantification and mitigation of the risks, project by project," she said. "It will also let the risk estimation to be in line with the progress of the work. Because it is based on precise and robust formulas that allow sufficient provision for explicit contingent liabilities".

César Arias, Director of Public Credit and National Treasury at the Colombian Ministry of Finance, said: "These methodologies may be a benchmark for good practices for territorial entities that develop infrastructure projects with private participation. Undoubtedly, it is a breakthrough that will avoid headaches for both the nation and the subnational governments of the country." He said the new methodology would also be a better tool to estimate risks and to incorporate real scenarios in the quantitative analysis.

Paola Molina, Head of the PPP unit at the Colombian Ministry of Finance, stressed the importance of continuing efforts in order to guarantee the best practices in risk management with the aim of improving quality infrastructure in the country.

Looking forward, the government will conduct a series of training sessions for the local authorities, such as cities and municipalities, for incorporating the new methodology into their plans as they move forward with their public-private partnership projects. Ultimately, all these efforts will contribute to Colombia's macroeconomic and fiscal management and reducing Colombia's vulnerability to risks through strengthened fiscal risk management.