As cities grow, so do urban water challenges. It is estimated that the urban population worldwide will nearly double by 2050 ⁠— an increase that has serious implications for water demand in cities.  Urban water demand is expected to rise to 30 percent of the total global demand compared to the present levels of 15–20 percent.  The rise of urban water use will also lead to more wastewater and water pollution. Climate change further exacerbates pre-existing water stresses and is already having a measurable effect on the urban water cycle, altering the amount, distribution, timing, and quality of available water. One of the biggest risks facing many cities in the developing world is water insecurity.

Jennifer Sara, Global Director of the Water Practice at the World Bank says that “urban water scarcity remains a common reality.  A 50 percent increase in urban water demands is anticipated within the next 30 years. Scaling up water reuse in cities is an enormous economic opportunity ⁠— it can provide a reliable water source for industrial and agricultural uses, often at lower investment costs and with lower energy use. Treatment of wastewater coupled with effluent reuse also has important direct climate benefits. When it comes to building water-secure cities, we need to focus on innovative solutions and diversify the portfolio of water resources available in a creative, cooperative, and collaborative way.”

Rethinking urban water systems through circular economy and resilience principles offers an opportunity to tackle the water challenges by providing a systemic and transformative approach to delivering water supply and sanitation services in a more sustainable, inclusive, efficient, and resilient manner. Circular Economy approaches have emerged as a response to the current unsustainable linear model of “take, make, consume, and waste,” thereby reducing pressure on natural resources and minimizing waste.

A new World Bank report titled Water in Circular Economy and Resilience (WICER), aims to establish a common understanding of circular economy and resilience in the urban water sector.

“We see countries embarking on circular economy strategies; yet so far, the water sector has not been systematically included in those high-level discussions. However, circular economy principles offer an opportunity to recognize and capture the full value of water - as a service, an input to processes, a source of energy and a carrier of nutrients and other materials. With this report, we want to show that the water sector can and should be part of the Circular Economy,” says Diego Rodriguez, Lead Water Economist at the World Bank and co-author of the report.

Deliver, Design Out Waste, and Regenerate

The report presents the Water in Circular Economy and Resilience (WICER) Framework (see image below) together with global case studies that show the benefits of becoming circular and resilient. It describes the key actions needed to achieve three main outcomes: 1) deliver resilient and inclusive services; 2) design out waste and pollution; and 3) preserve and regenerate natural systems while also focusing on recovering, reusing, and restoring. The report sets out to demystify the circular economy by showing that both high-income and low-income countries can benefit from it. They are not “all or nothing” propositions, and cities should not be reluctant to implement them -- especially in light of the benefits they can bring. 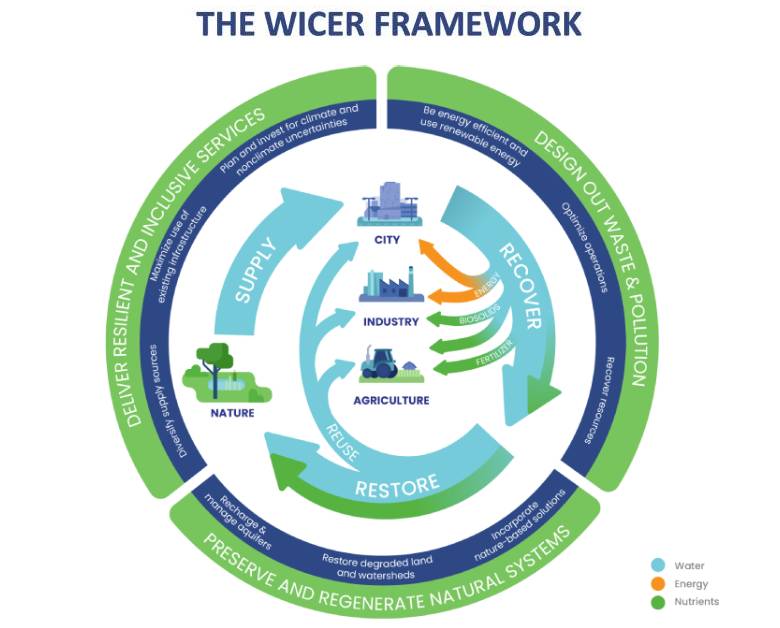 The report shines a spotlight on global experiences that are already reaping benefits.

For example, the Chennai Metropolitan Water Supply and Sewerage Board (CMWSSB) in India has embarked on several projects and investments to diversify water supply and become more circular and resilient to droughts. Since 2005, CMWSSB has been implementing several projects to treat and reuse wastewater. It sells the treated wastewater to industrial users and with the additional revenues covers all operating and maintenance costs, recovering the capital investment in the reuse project in less than five years. CMWSSB also retrofitted seven of its wastewater treatment plants to recover energy from wastewater and supply more than 50 percent of the energy needs of all the plants, thus saving on energy costs, helping sustain operations financially and reducing GHGs. The energy generation investment had a payback period of 2.8 years.

The report also showcases different approaches by water utilities to become circular and resilient, including:

These cases demonstrate that circular economy approaches are key to build water-secure cities.

“Many cities are struggling to address the challenges resulting from climate change, population growth, aging infrastructure, and increasing exposure to natural disasters, as shown by the recent floods in Europe, India, and China, and severe water shortages affecting places so diverse as Cape Town, Chennai, Sao Paulo and California. This has brought the importance of achieving urban water security to the forefront,” says Sameh Wahba, Global Director for the World Bank’s Urban, Disaster Risk Management, Resilience and Land Global Practice.

Many World Bank initiatives and projects are already contributing to the achievement of circular and resilient urban water systems, and the WICER approach provides a comprehensive framework. It also builds on and complements ongoing initiatives of the World Bank, such as Utility of the Future, Citywide Inclusive Sanitation and Policies, Institutions and Regulations and is a core component of the “Water Secure Cities Initiative,” launched jointly by the Urban and Water Global Practices.

The WICER report also highlights the role of the water sector towards the reduction of greenhouse gas emissions through, for example, energy efficiency measures and self-generation of renewable energy. The report shows that applying circular economy and resilient principles in urban water contributes towards the achievement of several SDGs and is also in line with the climate agenda.  To avoid being locked into linear and inefficient systems, low- and middle-income countries can leapfrog and apply the WICER framework to design and implement circular and resilient water systems from the outset. The WICER initiative demonstrates that this is not only important from an environmental and climate point of view, but also as an instrument to achieve financial sustainability.

The report is part of a global initiative with the same name, Water in Circular Economy and Resilience (WICER), which will continue to support countries to embrace circular economy and resilience principles and ensure that cities are water secure.

The report Water in Circular Economy and Resilience (WICER) was funded by the Global Water Security and Sanitation Partnership (GWSP).