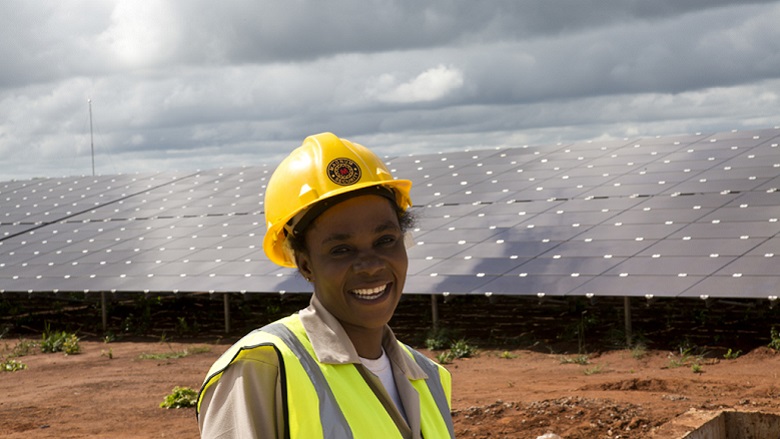 In Zambia, >27,000 homes are supplied with electricity thanks to the Bangweulu Scaling Solar Plant, based on average power consumption per capita in Zambia.

In 2017 and 2018, the annual amount of climate finance globally crossed the half-trillion-dollar mark for the first time.

Through 2030, a shift to low-carbon, climate change-resilient economies could bring $26 trillion in economic benefits and create over 65 million jobs, according to the Global Commission on the Economy and Climate.

“This is exactly the right time to look at how we can make climate finance more effective and more impactful,” says Marc Sadler, Manager of the Climate Funds Management unit at the World Bank.

“Not only do we see an increased realization of the economic benefits of clean development pathways, along with decreasing costs for clean technology, but there is also a clear need for a more transformative climate finance system.”

The solar plants were the first to become operational under a World Bank Group program, Scaling Solar, that lays the groundwork for PV plant development while also providing financing and other tools and services to make solar development easier and more affordable in developing countries. Scaling Solar aims to streamline the solar development process and reduce risks for governments and private investors looking to expand access to renewable energy.

“Our goal is to create markets for solar power where they do not already exist, to help countries expand and diversify their energy supply, and to close gaps in access to sustainable reliable electricity,” says Emmanuel B. Nyirinkindi, Director, IFC Transaction Advisory Services. “Through Scaling Solar, we are expanding opportunities for economic growth, jobs, education, health and other benefits that come with greater electricity access.”

Scaling Solar reduced the cost of solar power development in Zambia by attracting international solar developers to the projects. It also leveraged the falling costs for developing utility-scale solar photovoltaic in large markets in Europe and North America. In May 2016, a competitive bidding process, organized by the Scaling Solar program, secured for Zambia the lowest solar price in Africa to that date -- 6.02 US cents per kilowatt hour.

Two years later, Senegal’s Scaling Solar project achieved tariffs of 3.80 and 3.90 Euro cents per kilowatt hour—representing a price cut of approximately 60 percent compared to previous solar deals in the country. Once the plants are built, this will constitute Senegal’s cheapest utility energy source. Scaling Solar has since expanded into Afghanistan, Côte d’Ivoire, Madagascar, Togo and Uzbekistan.

The World Bank is helping countries adopt emerging approaches to electricity service delivery and deploy technological innovations that have substantially increased the number of households with service in a short amount of time. In Ethiopia, for example, a $375 million program supports both on-grid and off-grid efforts, with a focus on connecting schools and clinics.

In Egypt, the government worked with the World Bank Group to address energy shortages and reform the energy sector. A key part of the program was to develop solar power. The Benban Solar Park is the country’s first photovoltaic solar park stretching over 37-square kilometers. When fully operational, it will generate over 2,000 megawatts of power, employ 4,000 people, and avoid 2 million tons of greenhouse gas emissions a year, the equivalent of taking about 400,000 cars off the road. The World Bank supported reforms to Egypt’s electricity sector and provided the country with a $3 billion loan, while the Multilateral Investment and Guarantee Agency, provided $210 million worth of political risk insurance to encourage private lenders to invest. 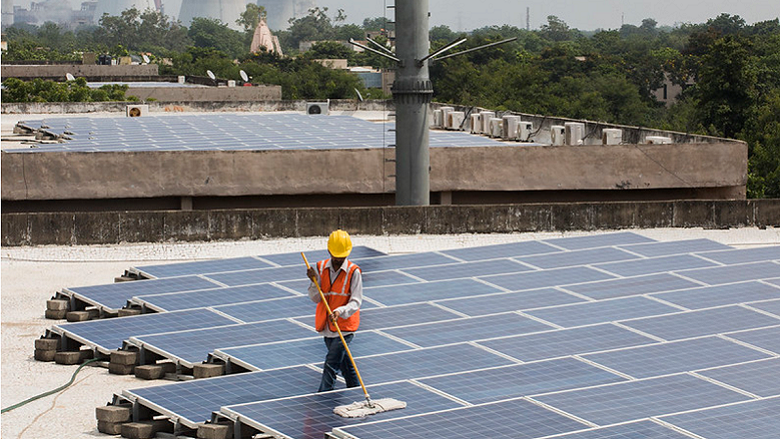 Solar panels on the rooftop of a government building in Gandhinagar, India, on September 12, 2018. These solar panels collectively produce 2.5 megawatts of power.

To help India make progress on its solar energy goals, the World Bank partnered with the State Bank of India, one of the country’s largest commercial banks, in 2016 to make $648 million in discount financing available for rooftop solar development.

At the same time, the World Bank began a “very broad and deep capacity-building program” to create the policy and regulatory environment needed for rooftop solar to flourish, says Simon Stolp, who leads the World Bank’s Energy Program in India. This technical assistance effort created an enabling regulatory environment for rooftop solar in 17 of India’s 36 states and union territories.

While rooftop solar grew from 545 megawatts in 2016, to approximately 5,500 megawatts or 5.5  gigawatts by May 2020, it still falls short of India’s 2022 rooftop solar target of 40 gigawatts and much more progress is possible.

But, says Jain, the lockdowns and reduced energy usage during the COVID-19 pandemic have affected the rooftop solar industry in India. And the pandemic is expected to delay renewables deployment globally, according to the IEA’s Renewable Energy Market Update.

As the immediate health crisis is subsiding in parts of the world, governments are looking to ensure a financial and economic recovery.

“These measures that governments take must be balanced so that the urgent focus on short-term needs – jobs, economic growth - should not overlook opportunities to achieve other longer-term goals, including boosting overall resilience and decarbonization,” says Stephen Hammer, Advisor, World Bank Climate Change Group, “This is a once-in-a-generation opportunity for countries to invest in cleaner, better growth and ensure prosperity over the long term.”

In order to do so, countries may need flexible grant support to help with project preparation in such a short period of time. A number of funds are exploring and establishing ways to make this kind of support available to countries and to helping them convert their national climate commitments (NDCs) into actionable projects that would be competitive in stimulus discussions.

Mobilizing private finance will also be essential: “When it comes to sustainable finance, the private sector is crucial, but to take these opportunities to their full scale, partnerships, innovation and leadership must be allowed to flourish,” says Alzbeta Klein, Director and Global Head, Climate Business, International Finance Corporation. “Governments must provide a regulatory environment conducive to private business; multilateral development banks must help mobilize investors and help lower risk.