3 Things You Need to Know About Climate Finance 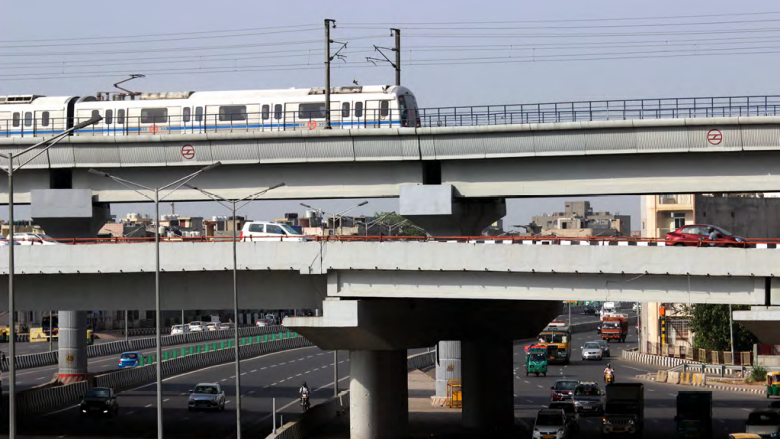 60% of the Delhi Metro system’s daytime demand is met by solar power.

The Delhi Metro Network meets almost 60% of its daytime demand with solar energy, generated by the Ultra Mega Solar Park in Rewa, Madhya Pradesh, developed with support from the World Bank Group and the Climate Investment Funds.

Countries around the world are expanding energy access, improving energy efficiency, making electricity more reliable, and reducing emissions while protecting people and property from climate change-related impacts – actions that can help build critical resilience and shape a sustainable recovery from the coronavirus pandemic.

The Bank Group is already the largest multilateral funder of climate investments in developing countries. In 2016, the Bank Group set ambitious targets to accelerate climate action and help countries meet their climate goals. Under the Climate Change Action Plan for 2016-2020, the Group laid out a plan to increase climate finance from 21% to 28 % of the Bank’s total budget and has surpassed these targets for the second year in a row: providing a record annual amount of $20.5 billion in climate-related financing in fiscal year 2018, and  $17.8 billion in fiscal year 2019.

The Bank Group is stepping up climate investments for the future. Our new Climate Change Action Plan for 2021-2025, taking effect in July 2020, has a strong focus on increasing adaptation; leveraging private sector finance, and supporting increased systemic climate action at the country level, including by supporting Finance Ministers to share best practices and experiences on macro, fiscal, and public financial management policies for low-carbon and climate-resilient growth.

In addition to direct financing, the Bank Group is also responding to country demand by mobilizing private investment and helping open low-carbon markets where they didn’t previously exist. Private sector investment in low-carbon development is accelerating rapidly and already has reached over $1 trillion annually. To mobilize more private finance for development, the Bank Group is working closely with countries to create markets and de-risk investments.

For instance, the Bank Group’s $1 billion program to accelerate investments in battery storage aims to adapt and develop solutions to integrate wind and solar energy for round-the-clock power. The program’s goal is to finance 17.5 gigawatt hours (GWh) of battery storage by 2025 – more than triple the 4-5 GWh currently installed in all developing countries and it is expected to mobilize another $4 billion in concessional climate financing and public and private investments.

In 2016, Egypt launched a Bank Group-supported program designed to reform the power sector and encourage investment from private companies. Six million solar panels later, the Benban Solar Park is the country’s first photovoltaic solar park stretching over 37-square kilometers. When fully operational, it will generate over 2,000 megawatts of power, employ 4,000 people, and avoid 2 million tons of greenhouse gas emissions a year, the equivalent of taking about 400,000 cars off the road. IFC spearheaded the financing package, marshalling $653 million in loans from a consortium of nine international banks. The World Bank supported reforms to Egypt’s electricity sector and provided the country with a $3 billion loan, while the Multilateral Investment and Guarantee Agency (MIGA), provided $210 million worth of political risk insurance to encourage private lenders to invest.

Other examples include the Climate Investment Funds which have enabled $60 billion in climate finance through partnerships with the Bank Group, other multilateral investment banks, and the private sector to advance clean technology, energy access, and sustainable forestry, and build resilience to climate change in 72 countries. Green bonds issued by the World Bank and IFC have also raised $23 billion from institutional and retail investors for projects that help lower global carbon emissions. And to further spur the exchange of ideas, the Bank Group hosts the Innovate4Climate global conference bringing leaders from government, industry, business, finance, and technology together to envision the next generation of climate-smart solutions with the potential to transform the global economy.

Bank initiatives using carbon finance – investments in programs that reduce or avoid greenhouse gas emissions – have made $2 billion in emission reduction payments since the first carbon fund was launched in 1999.  The effort includes work to reduce greenhouse gas emissions from the forest and land-use sectors across more than 50 countries. In Ethiopia, for example, the Biocarbon Fund Initiative for Sustainable Forest Landscapes supports the reforestation of 9,000 hectares in Oromia by 2022. The program contributes to a massive reforestation effort by the government and is seen as critical to preserving one of the last two relatively intact forests in mountainous areas of the country.

Carbon finance also provides incentives for communities to manage their forests sustainably. In Ghana,  for instance, the Forest Carbon Partnership Facility will reward community efforts to reduce emissions from deforestation and forest degradation, which can also enhance income and livelihood opportunities for farmers and forest-dependent communities.  The first-of-its-kind program aims to reduce carbon emissions by at least 10 million tons of CO2 by 2025. It will also encourage climate-smart cocoa production on almost 6 million hectares of the West Africa Guinean Forest, a biodiversity hotspot.