The World Bank Group Exceeds 2020 Climate Targets for the Second Year in a Row: Here’s How It Was Done 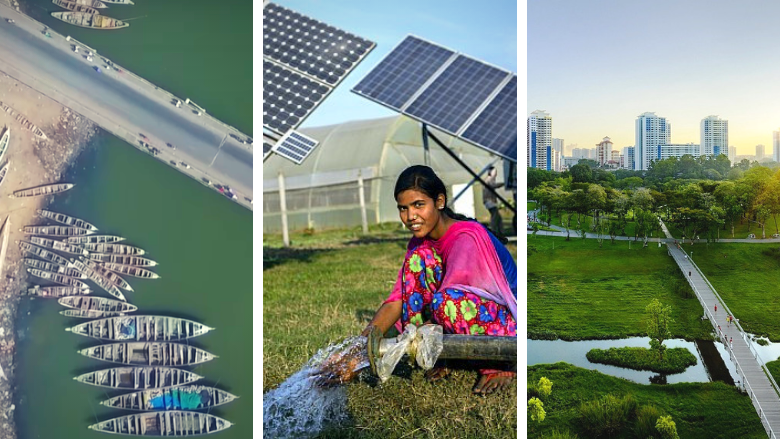 The Risks of Unabated Climate Change are Mounting.

July 2019 was the hottest month on earth since record-keeping began over a century ago. Heatwaves broke temperature records in Europe, and India endured a month-long heatwave with temperatures reaching 50 degrees Celsius (123 degrees Fahrenheit).

September 2019 saw the devastation caused by Hurricane Dorian in the Bahamas, leaving almost a quarter of the population in need of immediate humanitarian relief – food, shelter and medical assistance – and estimates predicting losses of billions of dollars.

Looking ahead, climate change could depress growth in global agriculture yields up to 30 percent by 2050. 500 million small farms around the world will be the most affected. And by 2030, climate impacts could push an additional 100 million people into poverty.

At the same time, countries can unlock new economic opportunities and jobs through climate action.

In the Climate Change Action Plan (2016-2020), the World Bank Group made a commitment to increase the climate-related share of its lending from 21% to 28% by 2020. These ‘climate co-benefits’ are counted as the portion of project financing that delivers either mitigation or adaptation benefits to project beneficiaries. This total – roughly $17.8 billion across the Group – is the result of an institution-wide effort to mainstream climate considerations into all development projects.

With a tropical climate that includes a rainy and dry season, as well as a coastline susceptible to sea-level rise, Sierra Leone has grappled with heavy rainfall and drought. From 1998 to 2018, natural disasters resulted in more than 1,200 deaths and affected more than 50,000 people. In 2019, the World Bank financed a transportation project in the coastal Western Area Urban District, the most populous district in the country, which addressed risks posed by climate change. The project identified vulnerable corridors through hydraulic modeling and created a more robust mobility system in the event of flash floods or landslides. Improvements include increased drainage capacity, surface and pavement works, and slope stability interventions. The project also supports Sierra Leone’s transition to a low-carbon economy by promoting the use of public transport. The direct beneficiaries of the project are Western Area’s daily public ridership – over 75,000 people, with nearly 40 percent women –as well as 50,000 people who benefit from more resilient roads. This project generated approximately 60% of climate co-benefits.

Pakistan ranks among the top 10 most climate-vulnerable countries in the world. Agriculture serves as the backbone of the economy, contributing to 19% of GDP and employing 42% of the labor force. Extreme weather events, like floods, come at a high cost. Additionally, climate impacts like the melting of the Himalayan glaciers, affect water flows into the Indus River system and threaten water supplies for food production to an already inefficient water use system. A World Bank supported project is supporting efforts to create a more climate resilient agriculture sector through the rehabilitation of watercourses in Khyber Pakhtunkhwa. The broader support to the sector includes water policy reforms that create incentives for farmers to use less water intensive crops and ensure adequate water availability to small holder farms. The project also introduces irrigation technologies, supports gender equity in the agriculture sector, and stimulates private sector investment. It will benefit approximately 150,000 smallholder farming families, around 1.1 million people. The climate co-benefits of this project are expected to be as high as 96%.

With a population of almost 10 million people, Vietnam’s Ho Chi Minh City is an emerging global megacity and commercial hub that is facing serious challenges posed by rapid growth and urbanization. And as a low-lying metropolis, Ho Chi Minh City also faces significant risk of flooding due to rising sea-levels. An IDA development policy credit approved in 2019 is helping to strengthen the foundations for sustainable and resilient urban development in HCMC. This operation supports reforms to improve land use planning, fiscal governance, wastewater management, and public transportation. Reforms to the current wastewater tariff structure reduce operational and maintenance deficits, while providing incentives to maintain, expand, and improve wastewater drainage to mitigate flood risk. This operation, which generates climate co-benefits of 28%, illustrates how climate considerations can also be integrated into development policy operations.

These snapshots are only a small sample of the kinds of climate co-benefits developing across World Bank operations – stay tuned for more!