How Ecuador is using text messages to improve children’s health 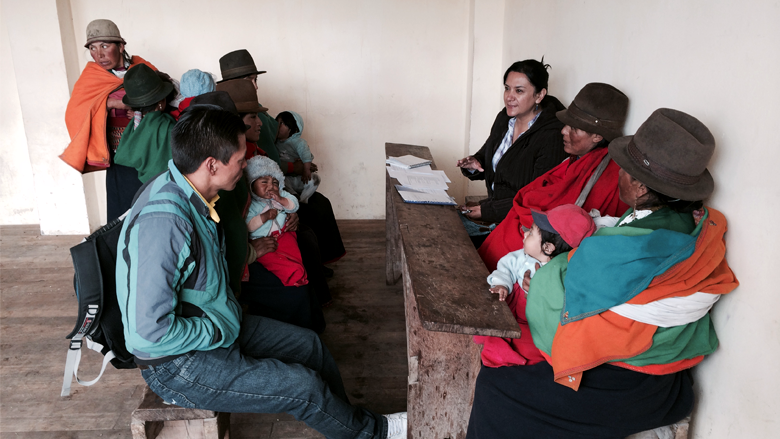 Can text messages save lives?

That was the question World Bank researchers asked themselves for more than a year in Chimborazo, a rural region of Ecuador. High in the Andes mountains, Chimborazo is home to a large indigenous population living in small villages separated by miles of rough, unpaved roads. More than half of the region’s households live in poverty. There is little access to clean water and bathrooms. Nutritious food is in short supply.

In 2012, nearly half of children in Chimborazo suffered from childhood stunting, where chronic malnutrition slowed their development. The stunting rate in Chimborazo was the highest in Latin America and comparable to the Sub-Saharan African countries of Botswana, Ghana, and South Africa.

In Chimborazo, taking children to health checkups often requires traveling long distances on rough roads. As a result, mothers often did not know when to integrate solid food into their children’s diets, despite years of efforts by the Ecuadorian government to promote the use of vitamins and supplements.

Starting in 2013, World Bank researches fanned out across Chimborazo and found that most children under 3 in rural areas rarely attended health checkups, so they tried another way to get the information to them. Caregivers in the study were enrolled in nutrition and monitoring programs through local health clinics. But researchers recognized that when participants went home, they often did not continue the nutrition and hygiene regimen. So they received positive, encouraging text messages, personalized to each participant and their children.

For 14 months, 2,000 families received regular text messages — as many as two a week – encouraging mothers and other caregivers to take their children for regular checkups, use iron supplements and micronutrients provided by the government, boil water to make it potable, wash their hands regularly, and improve food preparation and hygiene.A control group or another 1,000 families received no text messages.

Taking into account difficulties with phone service, the children under 2 of families who received texts gained weight, and the prevalence of respiratory illnesses decreased by 29 percent. The number of children who developed fevers requiring hospitalization went down 9 percent. Children whose caregivers got the text messages also reported an improvement in overall child health.

Mary Abarca, a mother of two in the Chambo district, found the text messages useful, including instructions on how to wash and cook food and reminders about hygiene and nutrition. “Through technological advances, we can inform ourselves and communicate,” she said.

Mary’s experience tracks with what World Bank researchers learned about the power of texting to communicate across the region.

“What we found is that texting is not, of course, a solution to any of this on its own. It is a complement,” Ana Maria Oviedo, World Bank Senior Economist explained. “It cannot solve the structural problems of malnutrition, but it can encourage the parents or the caregivers to behave a little bit differently, to change their behavior so that, within constraints, they actually do their part.”