In many parts of the world, people do not need to think about the security of their land rights. They are simply taken for granted, either as landlords or tenants. However, for the majority of the world’s poor, secure property rights are a rare luxury.

As discussed at the Land and Poverty Conference 2017, held this week at the World Bank, secure land rights are important for reducing poverty and boosting shared prosperity at the country, community, and family levels. , particularly in agriculture and infrastructure; for supporting countries and their people in building resilience by preventing land-takings and mitigating forced migration.

At the country level, for example, in FYR Macedonia, in 2005, only one-third of the apartments were registered at all. People simply did not know what their rights were and if they tried to find out, the agencies did not have accurate information. Through the Real Estate Cadastre and Registration Project (RECRP), the World Bank helped the government change their property laws and regulations.

The RECRP supported the creation of the private surveyors sector, which allowed the Agency for Real Estate Cadastre to strengthen its quality control and supervision functions. In 2005, there were 14 licensed private surveyors in the country and zero firms. By the end of the project, in 2015, there were 249 licensed private surveyors and 152 firms. In addition, the online services became broadly available and accessible on all devices, including smartphones, in both the local language as well as in English to attract foreign direct investments in land.

As a result, surveying of land went up from 43% to 99% of the country in 10 years. When it used to take two months to register a property sale or a mortgage, it now takes a day or two. This has leveraged private investments. In fact, the value of mortgages went up from EUR 450 million to EUR 3.4 billion.

“The difference is obvious. I am now able to turn my real estate quickly into a capital asset to finance my business, which greatly helps in a dynamic market that we work in,” said Maja Dimitrievska, a businesswoman in Skopje.

But land and property rights are not just good for a country’s growth and investment climate. It matters deeply for social inclusion, particularly for historically disadvantaged communities, such as Indigenous Peoples.

In Nicaragua, Indigenous Peoples’ rights were not recognized. However, starting in 2002, with World Bank support, the government launched major legal, policy, and institutional reforms. Fast forward 15 years: Nicaragua has mapped and titled all 23 ancestral territories of Indigenous Peoples in the Caribbean Region. This is over 30% of the country’s territory. 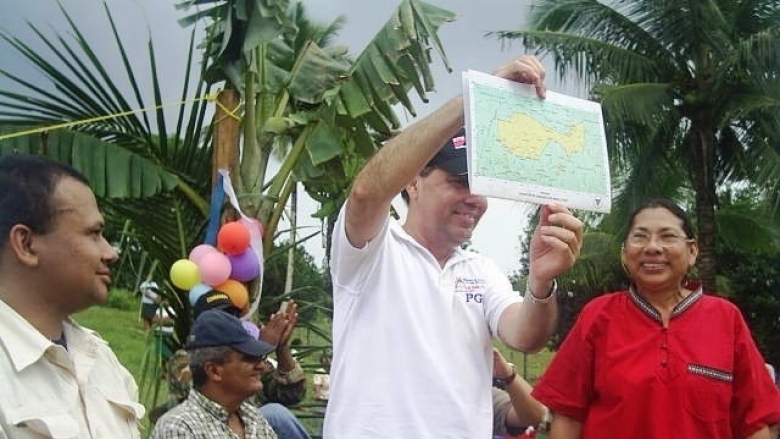 The indigenous Awas Tigni community in Nicaragua receives a registered title that recognizes the collective property of their territory.

One of these communities is the Awas Tigni, an indigenous Mayagna community, with a population of 2,400 people. Through the First and Second Land Administration Projects (PRODEP I and II), their territory was demarcated and the community given a registered title that recognizes the collective property of their territory, including not only their settlements but their forest lands and sacred places. This allowed the community to gain direct control over natural resources and a better bargaining position with outsiders who may want to invest there. Long-standing inter-territorial conflicts, including between different Indigenous Peoples, were resolved through a participatory process of demarcation and alternative conflict resolution mechanisms.

Nicaragua has become a model for other countries in Latin America. So much so that delegations from neighboring Honduras have visited several times to learn how communal land titling can be implemented successfully.

Secure land rights also matter for families and individuals. Improving tenure security for both women and men can have a greater impact on household income, food security, and equity.

In its transition to a market economy, Vietnam made land reform a centerpiece of its development program.  The desire to modernize the land administration system, improve service delivery, and enhance tenure security for all land users and, in particular, the most disadvantaged and vulnerable communities, resulted in the conception and implementation of the Vietnam Land Administration Project (VLAP), which is now in its next stages of implementation. As a result, Vietnam issued more than 3 million land use certificates.

The reforms also allowed both husbands and wives to be named in the certificate.  60% of all certificates were issued this way.  Using the certificates as collateral for loans, mostly for handicrafts and other small businesses, has allowed millions of Vietnamese women to have economic choice and political voice.

“With the land title, I now have the same rights as my husband to borrow money. I got a loan for 5 million dong [for my pig farming business] and got 2 million dong in return,” said Bui Thi Tu, a woman farmer from Hà Nam Province.

These examples show the transformational impact secure land tenure can have at multiple levels. The World Bank continues to support countries to secure land rights for their populations, with special concern for the equal rights of women, Indigenous Peoples, ethnic minority communities, and other vulnerable groups.